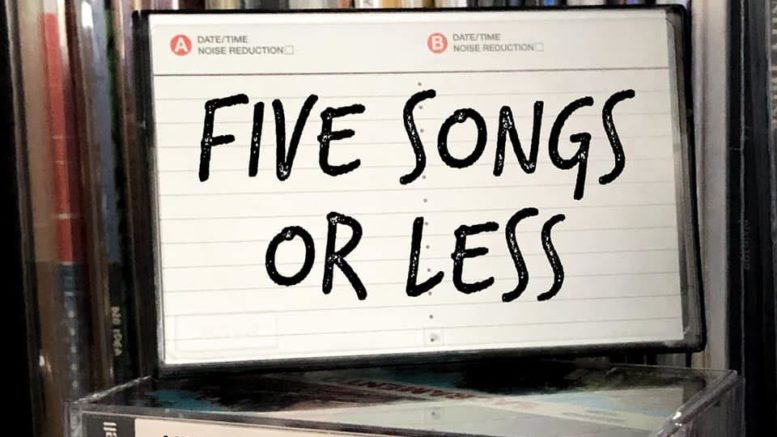 Listeners to a new podcast can join the debate over bands

Is there any more serious strain on a friendship than one friend forcing another to listen to Third Eye Blind?

The relatively new podcast “Five Songs or Less” seeks to answer this question and others, with a new band on the dissection table each week. Or, as the show’s tagline puts it, “A podcast where two friends punish each other with music, five songs at a time.”

Ten episodes in, the friendship between hosts Danny Ensele and Dante Geoffrey seems to be holding up. The pair became friends in 2007 while working at a Sacramento record store that comes up frequently in “Five Songs or Less” but is pointedly never identified.

After Geoffrey’s cross-country move, “we hadn’t seen each other, but we would still text each other, ‘Hey, check out this band,’ that kind of thing,” says Ensele, who still lives in Sacramento.

“Five Songs or Less” gives others a chance to witness the friends’ hits, misses and deliberate baiting each week.

The premise of the podcast is as simple as the name: Ensele and Geoffrey switch off week to week, presenting the other with a five-song playlist meant to either introduce or sway the other into becoming a fan of the band in question.

“It seems like even when a podcast episode starts, I’m not sure how he’s gonna feel about this,” Geoffrey says. “By the end, there’s always more common ground than not.”

“You can train yourself to like it,” he adds. “If you get enough reps, you’ll figure out how to listen to it, at the very least tolerate it.”

“I had originally picked my five favorite songs that I could think of at the time, and I gave those to Dante, [thinking] I’m going to pick the five most accessible songs, songs that I think are accessible to everyone,” says Ensele, who picked Wilco for the first episode. “And that was kind of a mistake… So after that, I just started picking the songs that either I felt were my favorite, and also a good representation of the band.”

That shift in early playlist-making philosophy has led to the occasional outpouring of listener response. The most downloaded episode so far features punk band Propagandhi’s multiple-decade catalog. As is not uncommon on the internet, the online trolls came out.

While Ensele jokes that “Five Songs or Less” hasn’t yet reached the level of notoriety that attracts consistent trolling, Geoffrey—who does not run any of the show’s social media platforms—encourages listeners to “bring it.”

While the two call “Five Songs or Less” a fun attempt to maintain a friendship over long distances, for the listener, it’s a chance to discover a new band, or reexamine a band revered or reviled.

Find “Five Songs or Less” on all major podcast platforms.