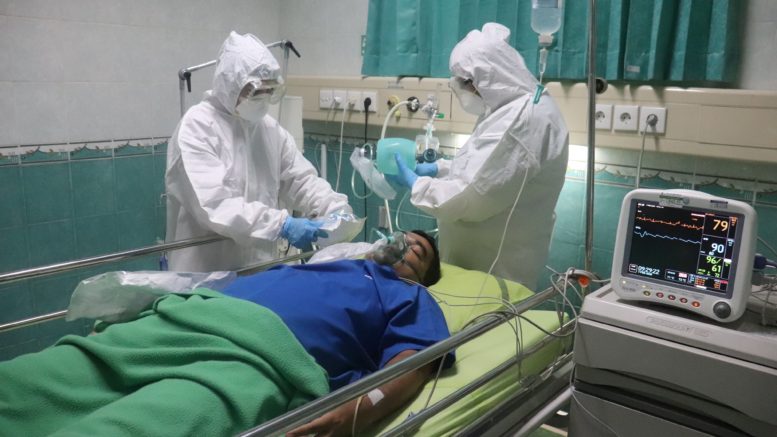 Photo by Mufid Majnun on Unsplash

Editor’s note: Sacramento region stays in lockdown as county officials plan how to slow the spread

The Sacramento region’s ICU situation isn’t as dire as the San Joaquin Valley or Southern California.

And even if the stay-at-home order gets lifted, due to widespread COVID-19 cases, Sacramento and other counties in the “purple” tier would still be under strict public health rules–including a 10 p.m. to 5 a.m. curfew for non-essential businesses–for weeks to come. On Dec. 31, Sacramento County Public Health announced that its order would stay in effect until further notice.

While the restrictions may be necessary for public health, they are crushing to businesses that are barely hanging on.

The regional stay-at-home order is based on availability of beds in hospital intensive care units; when it falls below 15%, a region goes under the stay-at-home order. On Dec. 9, the Sacramento region fell below that threshold, and the stay-at-home order took effect the next day. Bars, barbershops and salons had to close again, restaurants can only offer takeout and delivery and grocery and retail stores have lower capacity limits for customers. The soonest the order could have been lifted was Jan. 2.

Mark Ghaly, secretary of California Health and Human Services, said continued lockdowns are necessary to avoid crises at hospitals that could mean rationing of health care.

On Jan. 5, the California Department of Public Health issued an order requiring that some non-essential and non-life-threatening surgeries be delayed in counties with 10% or less of ICU capacity and requiring counties that do have available ICU beds to accept transferred patients.

Olivia Kasirye, Sacramento County’s public health officer, told county supervisors Dec. 30 that while the region’s ICU availability had been above 15% in recent days, the state may still extend the stay-at-home order past Jan. 1 because of the crisis statewide and the potential post-holiday spike.

Just before Christmas, the total number of COVID-19 cases in California passed 2 million. It took the state about 10 months to record the first 1 million, but only six weeks for the second million. More than 24,000 Californians have died from coronavirus.

To get out of the “purple” tier and ease restrictions on businesses, the county must get the new case rate to 7.0 or below and the test positivity rate to 8% or below.

To stop the spread, Public Health considered fining the worst violators among businesses, but in early December pulled back in the face of vocal opposition. Education has been the priority over enforcement across California; state agencies have issued only several hundred citations during the pandemic.

Meanwhile, Sacramento County Public Health is trying to figure out how to best use nearly $23 million in unspent federal relief money–$14 million that is part of $45 million already allocated to the agency and $8.8 million in new funding.

In a special meeting Dec. 30, the Board of Supervisors approved most of a plan put forward by Kasirye.

Of the new money, the plan called for $7.8 million to continue COVID-19 testing and surveillance, an average of about 4,000 tests a week for four months.

Supervisors, however, voted 3-2 to redirect $1 million for child care subsidies and $1 million for services provided by the Latino Economic Council of Sacramento.

Supervisor Phil Serna, who made the proposal, said testing is a lesser priority as vaccinations increase, while counting on more federal money for testing. Don Nottoli and Patrick Kennedy also voted for the reallocation.

But Supervisor Susan Peters voted no, saying she’s uncomfortable with reducing funding for testing now with vaccines months away for the general public. Kasirye said the county will transition to a state lab to make up the testing. Sue Frost also voted no, saying she didn’t have enough information on the new programs.

The plan also calls for $1 million for a new program to provide food to needy families and homeless individuals. The money, however, would only be a start toward a $5.8 million request from Family Meal Sacramento.

There are also other proposals from community groups, which supervisors could consider once the county knows how much it will receive from the new federal relief package. They include a $1 million plan from the Sacramento Asian Pacific Chamber of Commerce for temperature sensors at business entrances. another $900,000 for child care subsidies and another $3.8 million in requests from the Latino Economic Council for outreach, education and small business aid.

Of the previous allocation, the plan includes $5.6 million to be spent on staffing through June 2021, most for contracts with private firms for testing, contact tracing, lab work and vaccination, but also $500,000 for employee overtime—a sore subject for Public Health staff.

The plan also includes $4.2 million for operations for six months, including $2.1 million for vaccinations and $1.9 million for mobile health units that go to nursing homes, which have been centers of infections and deaths.

It sets aside $4 million for community outreach, education and other services, including to disadvantaged communities, farm workers and homeless people. This includes the Collab partnership with Sierra Health Foundation to offer more support to Latinos, Blacks and other ethnic groups.

In public comments submitted in advance, the Sacramento Housing Alliance urges supervisors to allocate some money to help low-income renters, while the Sacramento Regional Coalition to End Homelessness calls for money to go to community groups helping those in encampments. And others said the county should be providing direct economic aid to small businesses.

While the county is hoping for more state and federal aid for vaccinations and other COVID-19 response in 2021, Public Health says the funding plan is the bare minimum to continue the coronavirus response.

Kasirye told supervisors that Public Health has a $45 million plan for other needs if federal aid arrives. Acting County CEO Ann Edwards said the county is expecting federal money for vaccinations, testing, food aid and other programs, but needs to see how much it gets and what the rules are for spending. That may not happen until the end of January.

Little light at the end of the tunnel

Be the first to comment on "A long, dark winter of COVID-19"