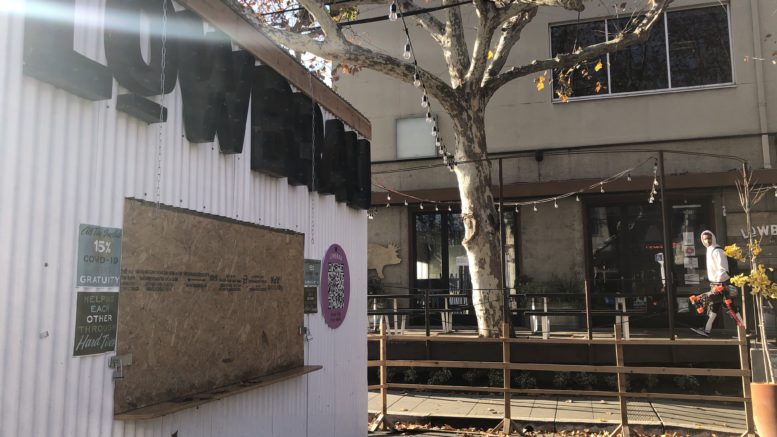 A skateboarder pulls up to LowBrau Bierhalle on Dec. 17, 2020. The Midtown business recently settled a labor lawsuit from an ex-employee. (Photo by Raheem Hosseini)

Two Sacramento restaurants are fending off separate labor lawsuits as California’s dining economy locked down for a second punishing time as the coronavirus pandemic rages out of control.

​LowBrau Bierhalle and The Mimosa House were both sued last year by former employees who say owners failed to pay them what they were owed and denied required rest breaks, according to court documents reviewed by SN&R.

In the case of Midtown’s LowBrau and its chief operators, Brock McDonald and Michael Harris, a settlement appears to be in the offing with plaintiff William Valencia, who alleged he wasn’t the only employee taken advantage of.

On Dec. 4, a Sacramento Superior Court judge released a tentative ruling that showed Valencia agreed to discontinue his efforts to pursue a class-action claim and that the two sides agreed to settle Valencia’s other claims by May 2021.

Valencia’s attorney told SN&R in an email that the terms of the proposed settlement are sealed.

Mediation efforts are set to continue through the middle of February 2021, with the parties tentatively scheduled to appear for a case status conference in March, court documents show.

Attorneys for the restaurant and its former employees didn’t respond to emails seeking comment.

Gov. Gavin Newsom announced Dec. 3 that the state was spiraling toward another lockdown due to the sharp rise in COVID-19 hospitalizations. Restaurants that were already struggling to stay in business through outdoor dining, take-out and deliveries now are under more extreme restrictions with glimmers of a second stimulus bill on the way.

The greater Sacramento region’s available intensive care unit capacity was down to 11.3% on Thursday. California lost a record 379 lives to COVID-19 on Wednesday, according to state public health data. California is swiftly closing in on 22,000 coronavirus deaths.

In Sacramento County, 727 infected people were dead as of Dec. 13, the county’s COVID-19 dashboard showed on Thursday.

One day before Newsom’s announcement earlier this month, the Downtown Sacramento Partnership said it would go ahead with its 16th annual Dine Downtown event in January. The 17-day culinary celebration involves more than two dozen restaurants serving three-course, prix fixe menus. The DSA said whether people dined in or took their meals to go would depend on restaurant availability and whatever public health guidelines were in place next month.

According to the California Employment Development Department, 69,200 people were employed in the food service and drinking industry in the Sacramento metropolitan area in October, down 14.7% from the previous year. The service industries have experienced the sharpest loss of jobs since the pandemic began.

LowBrau and The Mimosa House were not on the list of participating restaurants.

LowBrau reopened with an outdoor beer garden in June and is active on Door Dash. The Mimosa House, which has five locations, had been offering dine-in services on its outdoor patios.