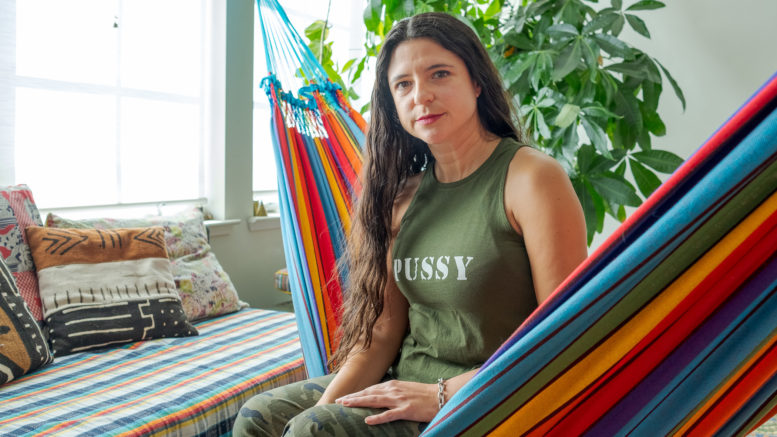 Janine Mapurunga was the first resident at the Warehouse Artist Lofts. Now she is working on a lifelong project, and making masks to support transgender rights in Brazil. (Photo by Patrick Hyun Wilson)

When the lofts opened five years ago, Mapurunga was the first resident. Her journey there began when she was just ten years old in a small town in northeast Brazil. Surrounded by her grandmother’s crafts—the hand-sewn baby clothes, silk embroideries, paintings and ceramics—Mapurunga says she was always inspired to create.

“My grandma asked me what I wanted for Christmas and I asked for a camera. I still have it,” she says as she retrieves a Yashica MG-3 from a raw wood shelf. “I went to the camera store… I just said, ‘What’s your least expensive camera that you have?’ And so the guy pulled this one out and my grandma paid for it in five monthly installments.”

These days, the plastic Yashica would probably only fetch $2 at a garage sale, but at the time it was a significant investment. The cost of film, developing and printing meant every photo needed to be important.

“I remember feeling like this great sense of responsibility. ‘What am I going to photograph?’” she said. “I was thinking like, ‘What’s the thing I love the most? What’s the most important thing to me?’ And it was my dog.”

In the selfie age, taking photos of puppies is expected, but when Mapurunga excitedly rushed inside to share her photographs with visiting relatives, one uncle didn’t share her sentiment toward her mutt, Hunter.

Mapurunga says she didn’t have access to photography classes in Brazil, so it took moving to Sacramento at 16 to begin learning the craft. Yet, another roadblock presented itself.

The Laguna High School class provided her with her first real exposure to a manual camera and the process of developing film.

It wasn’t until she began attending classes at Sacramento City College, taught by the late Andy DeLucia, that Mapurunga says she really discovered herself. “He introduced me to documentary photography….My head just exploded,” she said.

She learned about W. Eugene Smith, Cartier-Bresson and Mary Ellen Mark from DeLuica. “He showed us one of his projects with the Hopi indigenous people and it just blew me away, the images were so touching. And then he passed, it was very fast.”

In 2003, Mapurunga graduated from UC Davis with a degree in cultural anthropology. Five years after she left her small Brazilian town, Mapurunga returned with new eyes. It was during a visit with her grandmother when she realized she had been making documentary work her whole life.

The work has evolved into a lifelong project for Mapurunga, documenting her grandmother’s house and the life inside it. Her focus is on recording recipes and the methods of cooking to preserve her grandmother’s culinary legacy.

“Once my grandma passes, the recipes are gone,” she said. “Everything is made by hand, it’s cooked on a wood-burning stove, you use these massive mortar and pestles to grind certain kinds of things.”

Mapurunga is continuing to add to the body of work she began 17 years ago. Some of the 30,000-plus photographs she has made of her grandmother’s home can be seen in Sayonara Hotel, a documentary photo essay about the bed and breakfast her grandmother opened.

“She doesn’t have anything very serious going on, but she’s definitely slowed over the years. So for me, like, I’m very conscious that my grandma’s in the final chapter of her life,” she said. “I do understand the importance and the gravity of it. That’s where anthropology and documentary photography met and clicked for me back in 2003, even though I didn’t have the right words.”

After discovering the seminal work of her career, Mapurunga chose to carry on DeLucia’s legacy by teaching photography at Sac City College. At the same time, she worked in photo labs, printing other peoples wedding photos.

She noticed they weren’t very good. So she and a colleague, Allison Lel, decided to open their own wedding photography business, Exceptional Photography.

“We got a lot of work because brides just felt comfortable having women. And at the time the majority of photographers were older men,” she said.

Soon though, the pair split. Lel opened a film lab of her own and Mapurunga continued to pursue freelance photography opportunities. It was the early 2000s, however, and digital photography was about to boom, wiping out brick-and-mortar photo labs and forcing photographers to adapt.

But Mapurunga says the shift didn’t affect her much. “I’m not into technology like that,” she said. “I think that the reason that I’m still here 20-something years later, and there are still people who want me to create photos for them, is because of the type of images that I create.”

She has continued to create throughout the pandemic. In December of 2018 she launched a website, Maria Canta, to scratch another of her artistic itches, textiles. Throughout the pandemic she has focused the site to offer face masks, T-shirts, blankets and hammocks, made by primarily Brazilian artisans.

Mapurunga hopes that she will be able to use the funds from Maria Canta to support transgender people in Brazil. “My goal is to have a line of products where a set percentage of the profits from sales go directly to an organization that I’ve identified in Brazil that fights for the rights of transgender people.”

The duty Mapurunga has felt about her art has grown stronger during the pandemic, she said.

“I’ve always felt that we have a responsibility to not just to us and to the things that we have to say, but to all of us, to all living things,” she said. “I just wish that more people—beyond artists—that everyone would feel that sense of responsibility for how they’re living their lives. It’s not just about you. Actually, very little of it is about you.”

Heart to Art with Joha Harrison