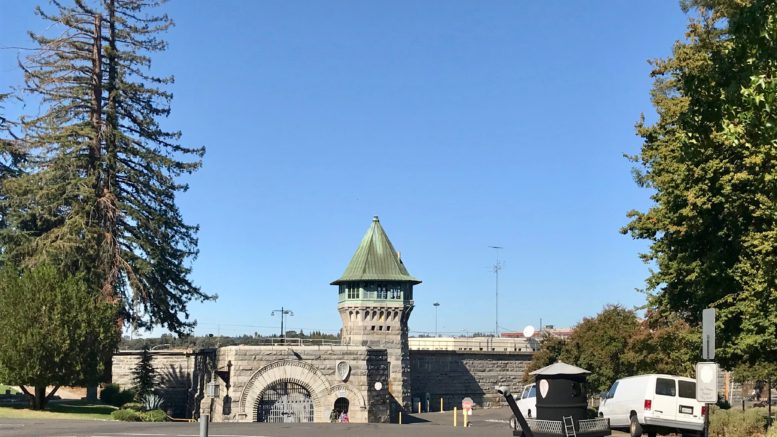 Federal agents are detailing how an elaborate heroin and methamphetamine trafficking operation was run in Sacramento from inside Folsom Prison. (Photo by Scott Thomas Anderson)

If federal prosecutors have their way, Samuel Keeton will be the first of many dominoes to fall in a widespread plot orchestrated by the Aryan Brotherhood, a group that sought to be the most feared white power criminal organization in California.

Keeton recently pleaded guilty to running methamphetamine and heroin from Southern California to Sacramento on behalf of the notorious gang, knowing that his activities were part of a larger enterprise that involved multiple killings in different state prisons. He’s one of 16 individuals indicted on a host of racketeering and conspiracy charges. While most allegedly belong to the Aryan Brotherhood, one of those charged is a disabled criminal defense attorney who’s accused of smuggling contraband into Folsom State Prison in the cushion of his wheelchair.

The trafficking enterprise, along with several planned hits, was disrupted by agents from the federal Drug Enforcement Agency and investigators from the state Department of Corrections and Rehabilitation. Court documents filed by those agents reveal a blood-soaked trail leading to the indictments.

According to court records, the masterminds behind the conspiracy were Ronald “Renegade” Yandell and William “Billy from Norco” Sylvester, two high-ranking members of the Aryan Brotherhood who shared a cell at Folsom prison. Yandell has a host of criminal convictions going back to 1991, most recently a double murder in Contra Costa County. Sylvester was also doing time for first-degree murder.

The Aryan Brotherhood has existed in California’s prisons since 1964, but Sylvester was reportedly part of a newer movement to establish dominance over several competing white power gangs. Federal law enforcement claims the brotherhood has a “blood in, blood out” policy—to join, a prospect has to commit a murder, and can only leave by dying. According to the DEA’s investigation, that is exactly how Sylvester gained his membership.

“Aryan Brotherhood members target USAS members for murder because the USAS has consistently refused to subordinate its California prison members,” DEA special agent Brian Nehring wrote in an affidavit. “The USAS has tried since approximately 2005 to unite all disparate skinhead factions under one umbrella prison gang … If this effort is successful, it might result in a skinhead gang that outnumbers the Aryan Brotherhood.”

Sylvester allegedly gained brotherhood membership by doing his part to stop that. Surveillance footage showed him descending on Richardson in the exercise yard and stabbing him in the head with a makeshift knife. He then started driving the blade into Richardson’s neck and back. By the time correctional officers responded, his spine was partially severed and nearly every major organ was punctured.

Authorities allege that the Aryan Brotherhood also targeted inmates belonging to the Skinhead Wolf Pack, the Golden State Skins and the American Front.

The Aryan Brotherhood went after non-white gangs, too. On Aug. 12, 2015, Hugo “Yogi” Pinell, a member of the Black Guerilla Family prison gang, was walking through Folsom’s B Yard when he was attacked. Court documents state that Pinell had been making confrontational remarks to white power gang members for years, and that killing him was “became a top priority” for the brotherhood. Members Jayson “Beaver” Weaver and Waylon Pitchford stabbed Pinell near the yard’s canteen window.

“A nearby CDCR guard deployed a grenade to stop the attack, but Weaver continued his assault,” Nehring wrote. “Weaver climbed on top of Pinell and straddled him. He continued to forcibly stab Pinell in the back while Pitchford pinned his legs … Another CDRC officer deployed another grenade to stop the attack. When the grenade went off, Weaver was unfazed. He continued to stab Pinell’s back in an up-and-down motion.”

The killings of Richardson and Pinell are both listed as crimes within the conspiracy charges against Yanell and Sylvester.

In 2014, agents from the DEA’s Sacramento office began tracking a woman who was allegedly selling large amounts of methamphetamine and heroin around North Sacramento. Jenna Queensberry first showed up on agents’ radar as they investigated the Family Affiliated Irish Mafia.

During that probe, agents used undercover drug buys and wiretaps to determine that Queensberry was actually taking her directions from Yandell inside Folsom prison. According to prosecutors, Yandell received drug orders from Queensberry via a contraband cell phone and then had brotherhood member Travis Burhop contact his network of dealers in Southern California to fill the order. Keeton, a convicted car thief who was on parole, acted as a runner between Burhop’s suppliers in Los Angeles and Queensberry in Sacramento.

Undercover DEA agents allegedly bought large quantities of drugs from Queensberry in places that included Sacramento’s Red Lion Inn and the AM/PM store on Northgate Avenue. Their reports say Queensberry had a “stash house” on Millet Way and was selling heroin for roughly $1,000 an ounce.

Court documents indicate that MacNamara, who uses a wheelchair, had no criminal record. Agents soon spotted Keeton and Queensberry having clandestine meetings MacNamara.

On Aug. 11, 2016, MacNamara arrived at Folsom prison, accompanied by a woman who claimed to be his paralegal, to meet with Sylvester. Prison investigators monitored that meeting on a soundless video feed. They reportedly observed both MacNamara and his supposed paralegal making suspicious movements as they spoke to the inmate. After the meeting, investigators immediately searched Sylvester, finding a new iPhone and tobacco hidden in a hand-sewn pocket in his waistband, as well as 20 grams of methamphetamine stashed in his rectum.

As MacNamara and the woman were leaving the prison, they were also searched. “In the seat cushion of MacNamara’s wheelchair, officials found three new phones, plastic wrappers and cell phone power cables,” Nehring wrote in court filings.

While being questioned, the woman reportedly told investigators that she and MacNamara had already made five smuggling trips to Folsom prison. MacNamara was arrested and has been charged with distribution of methamphetamine.

As the scope of the investigation into the Aryan Brotherhood widened, the DEA claims to have found evidence of three additional prison killings carried out by the gang between 2016 and 2018, the victims being Dough Maynard, Zachary Scott and Donald Pequeen. Agents say the also actively stopped the planned assassinations of three other inmates.

A total of 16 individuals were indicted in the conspiracy by the U.S. Attorney’s Office in the Eastern District of California.

Yardell and Sylvester are charged with five counts of murder, three counts of attempted murder and multiple drug trafficking charges. If convicted, they potentially face the death penalty.

Keeton pleaded guilty on Nov. 30 to conspiracy to participate in a racketeering enterprise and to conspiracy to distribute heroin and methamphetamine. He faces a maximum sentence of life in prison.

“We have found pounds and pounds of methamphetamine, heroin, fentanyl, several weapons,” U.S. Attorney McGregor Scott said when the indictments were announced. “And we’ve actually seized a house here in Sacramento which we believe was purchased with drug proceeds and used by the Aryan Brotherhood.”