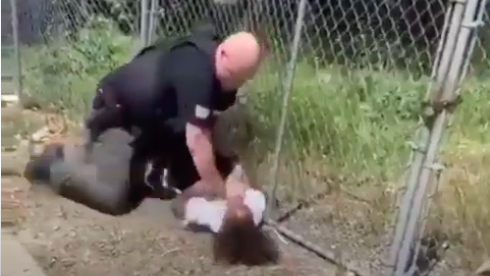 Essay: The videotaped beating of a boy is a moment of truth for Rancho Cordova police

As a pastor serving in Rancho Cordova, it is my moral obligation to watch over, protect and stand up for the most vulnerable in our community. I am also a stakeholder and bridge builder committed to safeguarding the community’s trust, along with my fellow faith leaders in Sacramento Area Congregations Together.

At a most vulnerable period in world history, when low-level, nonviolent offenders have been released in the interest of public health, a “problem-oriented” police officer in Rancho Cordova pursued an unarmed 14-year-old boy for suspected possession of a tobacco product and rather than counsel the teen, chose to beat him.

In what Sacramento County Sheriff’s Office spokeswoman Sgt. Tess Deterding called “proactive policing,” Officer Brian Fowell attacked Elijah Tufono, pounding his face into the ground and punching him repeatedly, as the helpless teen tried to protect his body from an armed man who is sworn and paid to “serve and protect.”

The millions of Americans who viewed this video and were outraged are not wrong in their characterization of this incident as a criminal act. If we witnessed an armed grown man beating a child in public, we would demand his arrest, especially, if the child were a white boy.

Is a black and Polynesian boy any less because of his race? Shouldn’t this child be afforded the same protections under the law? Is this the Rancho Cordova Police Department’s idea of proactive policing?

“If we witnessed an armed grown man beating a child in public, we would demand his arrest, especially, if the child were a white boy.”

In the midst of a global pandemic that experts tell us disproportionately impacts people of color, must we also be the subject to this? It is traumatizing enough to experience our loved ones dying at unprecedented rates, have our places of worship closed, our small businesses unaided by bailouts, our low-wage jobs disappearing and our kids bored and restless because our under-resourced schools are the last to get distance-learning programs. Must our community also have to cringe in fear that our children will be the subject of public beat-downs by law enforcement?

Officer Fowell must be held accountable. The first step is to remove him from the force and charge him with criminal assault and endangerment of a minor.

We know how important it is to Police Chief Kate Adams to have the community’s trust. Acts like these destroy all efforts at building this trust. Until real, meaningful and swift action is taken to hold officers accountable for reckless abuses against our community, we cannot encourage our community to trust they are safe on her watch.

This community needs proof that the leadership of the Rancho Cordova Police Department will not hide behind the blue wall of silence, but will break through this wall, stand with the community and set an example for what happens when a police chief fiercely protects all the children on her watch—even a 14-year-old black and Polynesian boy.

Be the first to comment on "Will cop be held accountable?"