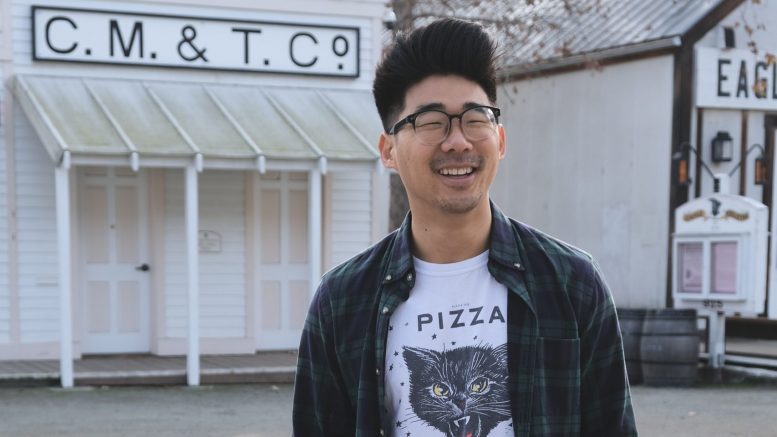 “Oddly enough, I don’t have very many followers in Sacramento,” Enoch Ku said. The statement is strange considering his project is titled, Ordinary Sacramento.

“I had met this photographer who was like, ‘Oh, there’s nothing more to shoot in Sacramento,’” Ku said. “If you think you have to travel somewhere just for a good picture, you’re missing out on the ordinary moments of life, beautiful moments of life, that are right in front of you.”

Through Ordinary Sacramento, Ku focuses his camera on the mundane. Each image is a simple scene–a crumpled poster in a store window, the shadow of a light post–but Ku finds abstractions and subtle tone. Each photo comes with a caption that is only the name of the street where it was taken.

Ku says that he began Ordinary Sacramento because he felt a need to slow down and appreciate the ordinary things. After working as a wedding photographer for years, Ku said he was constantly pushing himself, searching for the next job until he burned out.

“I was like, ‘Man, I need to slow down,’” he said. “That’s when I began to take my camera out, go on walks around my neighborhood, you know, take time out of my days to just slow down and just be.”

By slowing down, Ku not only noticed the ordinary things around him, but had a chance to look back on his own life and reflect on his experiences as the son of Korean immigrants.

My mom didn’t know what pudding was.

“You bring Korean food from home for lunch and you’re sitting down with your classmates and you open it, and like this foreign looking food and the smell. All the kids are like, ”Ew, what is that?’” Ku said. “I would always analyze other people’s lunch so I can go home and tell my mom, ‘I need you to pack this specific thing. Like, get some pudding,’ you know. My mom didn’t know what pudding was.”

Ku says he spent a lot of time thinking back about juggling his identity and about how he could move forward as an Asian-American. He also mentioned a common experience for Asian immigrants: learning that not all families take their shoes off inside their homes.

“’Wait, what?’” Ku said. “Like ‘my brain doesn’t work right now. You told me I should keep wearing my shoes?’”

It wasn’t just Korean-American culture that defined Ku growing up; he said that his Christianity also shaped him, pushing him to studying religion at UCLA.

I just want to share Sacramento. It’s such a beautiful city that, I found, I can enjoy even more because I’ve been able to just slow down and really take in these moments.

It wasn’t until after he went to Korea for three years that he realized that what he really wanted was to slow things down and returning to Sacramento was the way to do that.

Ku grew to love Sacramento and learned to appreciate the smallest details of the city. Currently, he is working on a book of photographs he made for Ordinary Sacramento.

“I just want to share Sacramento,” Ku said. “It’s such a beautiful city that I found I can enjoy even more because I’ve been able to just slow down and really take in these moments.”