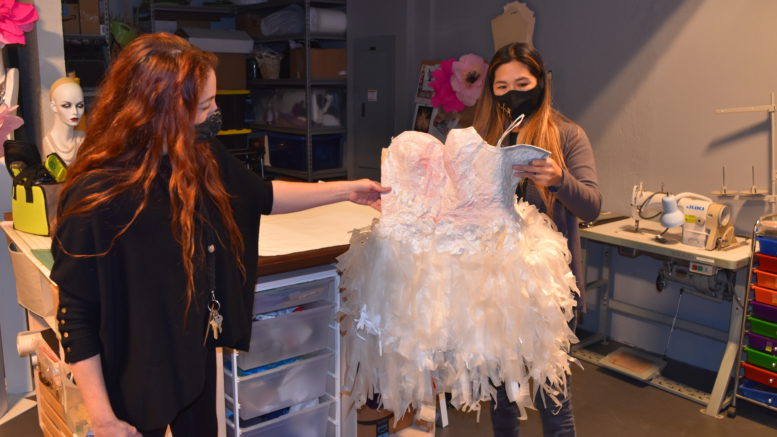 The sunlight is fading on the Old Sacramento waterfront as a lively event at one of downtown’s newest nonprofits wraps up.

A couple of members of the Sacramento chapter of the Sisters of Perpetual Indulgence stand outside, while a handful of artists are close to calling it a day, following a show by Kip Bridges, a Sacramento-based artist involved with the Sisters.

Everyone’s here because of the nonprofit that moved in August into the city-owned market space, an artist collaborative known as The Atrium, led by Shira Lane, a former filmmaker in Australia, Israel and Los Angeles.

Lane has rapidly ascended in the local arts scene over the last two years, making up for a lack of time in Sacramento with political savvy. Among her champions are Mayor Darrell Steinberg, political adviser Dennis Mangers and veteran consultant Wendy Hoyt, a member of The Atrium’s board.

“She got infected with an understanding that if you don’t get into politics, you better get out of the arts,” Mangers said.

Lane talks with bright energy, a lingering Australian accent and an easy laugh about uniting local artists, recently launching an online marketplace for them to sell their works and developing local cable TV programming and has been leading artists workshops online.

Lane’s fast emergence, however, isn’t going over so well with some members of Sacramento’s arts community, though they don’t want to air their complaints publicly.

For her part, Lane said it wasn’t her intention to ruffle feathers. “If there’s something that I’m doing that is not up to spec, it’d be cool if they told me,” she said. “If you want to tell me, I’m happy to work through things.”

In normal times, The Atrium might not have had a chance at landing a $219,430 city grant in September, one of more than 300 awarded to individual artists, organizations and nonprofits, totaling about $20 million of the $89 million the city received in federal COVID-19 relief money.

The city’s Arts, Culture, and Creative Economy Commission typically requires three years of financial statements from grant applicants. The Atrium didn’t receive its federal tax-exempt status until October 2019. Its sole tax filing so far showed $49,101 in revenue for 2019, with Lane working an average of 50 hours a week as founding executive director and receiving compensation of $8,400. Nonprofit executives in the capital region can easily make more than $100,000.

The Atrium received $100,000 less than it requested, while the other eight nonprofits in its division were fully funded.

During an Aug. 19 arts commission meeting, Doni Blumenstock questioned the amount of money going to “pretty high salaries and fees and so forth for the consultants and the people involved.”

In an interview, Blumenstock stuck by her assessment but also praised The Atrium’s marketplace project. “It’s worth funding. It just wasn’t worth funding at the level they were asking.”

Lane said all of the money is going to the online marketplace, including to hire three staff members. “I don’t want this to be money that we’re given, and then we’re done,” she told SN&R. “I want this to be something that actually makes a difference.”

Artists can put their work on sacramento.shop for free, with profits split 70% for artists and 30% for The Atrium. In return, Lane says she also offers business advice to artists, many of whom have little e-commerce experience.

According to Lane, more than 120 artists have already applied to be on the site. So far, the site features more than 15 creatives, including Safiya Neal, who says it’s a perfect place to grow her bath bomb business, Safiya & Co. Neal said staff at The Atrium photographed her products, made bar codes for each product, helped her write descriptions and listed the products on the website within 24 hours.

“They did it so professionally,” Neal told SN&R. “It’s like a well-oiled machine, it made me feel so comfortable.”

Lane also wants to encourage sustainability, integrating Upcycle Pop, a previous Atrium venture. Another artist on the site, Kat Martinez, is selling her abstract paintings for $40 to $175 to raise money to clean the oceans. “Doing it myself, via social media or word of mouth, is good, but it’s not as good as having an actual online shop,” Martinez said.

Mangers said he’s known Lane for two years, and said political connections are crucial to make up for a lack of local donor or corporate funding.

Lane said she met Hoyt and Steinberg while filming a commercial for the Power Inn Alliance and recently got to know SMUD board member Gregg Fishman, who just lost a bid for Sacramento County commissioner and who confirmed that Lane was paying him to do public relations work.

Be the first to comment on "On the fast track"