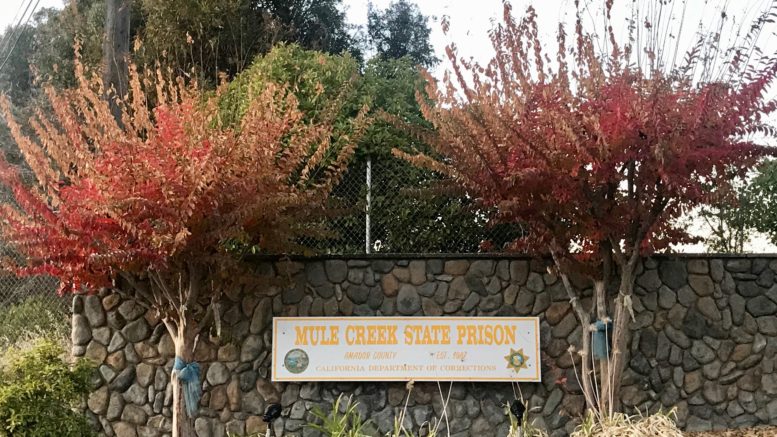 Investigations are underway at Mule Creek State Prison in Ione to determine how many inmates have stolen unemployment funds. Photo by Scott Thomas Anderson

Over the last two months, investigators across California determined that the dire events of 2020 are being capped by the largest instance of public fraud in state history.

According to the California District Attorneys Association and the U.S. Attorney’s Office for the Eastern District of California, tens of thousands of inmates—including convicted serial killers, rapists and 133 death row inmates—illegally obtained unemployment benefits, diverting funds that are badly needed by out of work Californians.

A group of elected prosecutors said during a press conference Wednesday that the fraud is happening inside county jails, state prisons and federal penitentiaries.

The revelation is particularly jarring for several rural district attorneys offices charged with prosecuting crimes inside state prisons. These prosecutors say early indications are that the scope of the fraud completely outstrips their resources. Nevertheless, they don’t have the option of deprioritizing the cases because, for the moment, the state Employment Development Department will only stop unemployment aid flowing to an incarcerated person if a DA’s office files charges against that inmate.

“The governor needs to turn off the faucet because these investigations are going to go on for months, and even years, especially in the rural communities that don’t have the resources,” said Amador County District Attorney Todd Riebe, whose office overseas Mule Creek State Prison. “It’s a black hole of taxpayer dollars. It’s grotesque.”

The first signs that convicts were widely sharing a technique to defraud EDD emerged in July, when a San Mateo County DA investigator named Jordan Boyd was listening to phone calls in that county’s jail for an unrelated case. Boyd heard an inmate telling a visitor about a new method the inmates were using to get paid.

“My inspector, rather than saying, ‘This has nothing to do with my case, I don’t need to listen to this anymore,’ was curious and listened to the rest of the conversation,” San Mateo DA Steve Wagstaffe recalled to reporters. “He listened in about this new scam that loads of inmates were taking advantage of.”

As Boyd followed the leads that would trigger the arrests of 22 San Mateo jail inmates, investigators with the California Department of Corrections and Rehabilitation were also detecting signs of the fraud.

It was CDCR’s Institutional Investigative Services, or ISU, team that informed Kern County DA Cynthia Zimmer that EDD claims were being made on behalf of inmates inside the five prisons that are scattered across Kern’s rural patchwork.

In some cases, inmates allegedly filed unemployment claims from inside the prisons, while in other instances an accomplice would file from the outside with the inmate’s identification. EDD would then send benefits to the outside conspirator in the form of a state debit card that requires no identification to use at an ATM. At that point, the accomplice could withdraw cash and begin to move it back to the prison inmate any number of ways, including in the form of money orders, deposits to an inmate’s commissary account or smuggled contraband, according to the state district attorneys association.

ISU agents soon made a similar notification to Riebe’s office in Amador County, as well as to Susan Rios, the DA of Lassen County, which is home to both High Desert State Prison and California Correctional Facility, better known as Susanville State Prison.

Trying to unravel what was happening, a number of DAs contacted U.S. Attorney McGregor Scott in Sacramento, prompting federal prosecutors to serve CDCR with subpoenas for records. This compelled the state to give the U.S. Department of Labor a list of its entire inmate population, which federal authorities then matched against data for unemployment claims made between March and August of this year.

According to a letter 10 county DAs sent to Gov. Gavin Newsom this week, the probe revealed 20,150 unemployment claims had been paid to, or issued in the name of, incarcerated individuals, totaling $140,253,207 in lost funds.

Zimmer said that, within that six-month window, her investigators and prosecutors are now tasked with handling at least 4,000 potential cases of EDD fraud.

“The fraud in Kern County alone is over $16 million,” Zimmer told reporters. “In my nearly four decades as prosecutor in this state, I’ve never seen fraud on this magnitude.”

Lassen County is a high Sierra ranching community of 34,000 people. Its DA’s office has one investigator and three prosecutors, including Rios. Based on the data from the labor department, their bantam team now has more than 1,500 cases of alleged EDD fraud to deal with.

The county doesn’t have the budget to hire an online forensic company to narrow down the search for evidence as some larger counties are doing.

“It’s a little overwhelming, to be quite honest,” Rios told SN&R. “That technology some other places are using is just not feasible for a county our size to pick up, given our financial situation. Our investigations are having to be done by hand, by listening to jail calls.”

The Lassen County Sheriff’s Office has dedicated two detectives to Rios’ team. ISU is also assigning several of its prison investigators to Lassen. Still, Rios doesn’t feel there are enough hands on deck.

Understanding that counties such as Lassen, Amador and Kern would face major investigative hurtles, the state DAs association and U.S. Attorney’s Office formed a joint task force. Reviewing the available evidence, the task force estimates that the amount of unemployment funds lost to criminals in 2020 could turn out to be in excess of $1 billion. It’s also estimating that 25% to 30% of inmates inside each state prison are involved in perpetrating the fraud.

Riebe noted this projection shows what his team, based in a foothill ranching community of 38,000, is up against.

“If you take the lowest end of that, 25% of the inmates at Mule Creek would be potentially a thousand new felony cases of EED fraud,” Riebe said. “I file annually between 130 and 150 felony cases coming out of Mule Creek, so this is seven times more than our annual caseload that we would anticipate getting from the prison. And it’s three times more than our overall felony caseload, including the prison, for the entire the county. It’s crushing.”

Given that gangs and other criminal networks on both sides of the prison walls are implicated in the fraud, Riebe and Rios say the task force is essential for mapping out the players and preventing duplicative investigative efforts.

“It’s a spider web,” Riebe observed. “We’re working together to share information, to use our combined resources, and to gather information from reluctant state agencies, because we need to find out who’s who.”

During the press conference, El Dorado County DA Vern Pierson, president of the DAs association, said that while the 17 fraud investigators who work for EDD have been cooperative, the department’s upper management has not. Pierson also said that EDD’s leadership is well aware that 25 other states currently utilize a cross-referencing data system to prevents prison convicts from filing for unemployment, but California didn’t implement that system.

“We could have avoided this nightmare,” Riebe stressed, adding that his office has thus far gotten little help or insight from EDD officials. “It’s a department under siege. Trying to get a shot-caller on the line to handle something is very difficult.”

Rios said that her office has been “hitting roadblocks” with EDD since its investigation started, though she’s hoping other state agencies will be more willing to provide information and assistance.

“If I can get assurances from the State Controller’s Office that this is a reimbursable expense, I may be in a position to bring on a second prison prosecutor for this sole purpose of working on this,” Rios said.

An EDD spokesman told reporters Tuesday that the department would be taking measures to close the systemic loopholes that had allowed convicts to make unemployment claims. Newsom issued his own statement saying that he had directed the California Office of Emergency Services to assist the task force.

But for the elected prosecutors on the task force, the action that’s most needed is an immediate change in EDD’s policy mandating claims continue to be paid to prisoners until official charges are filed against them. The prosecutors argue that a simple notification that an investigation is underway on an individual—especially ones who are easily verified as inmates—should be enough.

“I think we’re all offended that people who really need these benefits aren’t getting them, but claims continued to be paid those committing the fraud,” Rios said. “EDD has maintained that they cannot just turn off the benefits, so the money continues to funnel right out. It’s pretty wild.”

Be the first to comment on "For rural counties with state prisons, stopping inmate unemployment fraud is daunting"