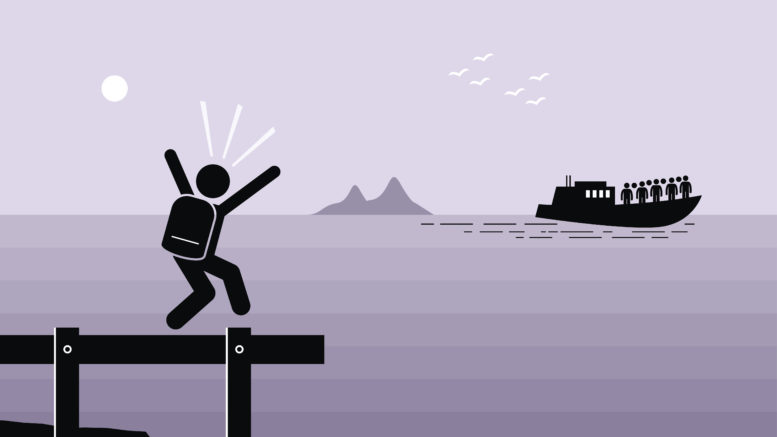 Sixteen years ago, Uncle Bill—which is to say my cousin’s Uncle Bill, an infrequent presence in my life whose reputation as a Southern-bred raconteur cast an ambient shadow—descended on our Thanksgiving celebration with his three ex-wives and their full brigade of offspring.

I remember this Thanksgiving like I remember a fever dream. Multiple family trees intertwined in my cousin’s cozy Northern California home. Cameos from my childhood seized center stage. Indiscernible revelry. I couldn’t turn around without bumping into some fourth cousin by marriage, much or little changed by the years gulfing our fleeting contact.

Uncle Bill must have been sick then, but I don’t think I knew it. His hair was grayer and maybe he was a little jowlier; maybe his eyes were puffier and dimmer. But he looked like the man I remembered. Like Paul Bunyan’s traveling salesman dad, with a voice that boomed through walls, usually followed by cannon bursts of laughter.

I could see him in the home of his younger brother and sister-in-law, my Uncle Don and Aunt Ellen, where I spent many summer weekends during adolescence. When they were together, Bill and Don sent their peers into fits of laughter with war stories of impoverished childhoods and wild adolescence. I remember something about a blinding and a can of Crisco. I remember two brothers taking an Air Force entrance exam and one turning to the other.

“R-a-t,” the other whispered back.

I must have seen Bill at Granny’s funeral. Bill’s mother was a small woman with a thin plate of permed hair and a sailor’s florid vocabulary. She lived in Stockton, and sat on the same couch facing the same television set when we visited. Her blind poodle sat on the carpet, its milky green irises drifting after idle chatter and daytime TV. Granny’s husband Ernie reclined in his chair like a fallen meteor. He hoisted us boys onto his wide lap and answered that he bit his nails when we asked why his middle fingers were stumps. For a year before she died, Granny wore a gauze flap over a hole in her neck. Sometimes she would lift it and make a noise like she was blowing her nose. Other times she would work a cigarette under it.

I wasn’t scared to look at her laid out in the coffin. She looked like herself, I thought. I only cried when I saw my dad and Don break down. I had never seen them weep and the realization that they could unmade me. I was 7.

On the drive to Don and Ellen’s after the funeral, my mother reminded her sons to offer their condolences. It felt unkind to remind my now-composed uncle his mother was dead, but I did as I was told. He hugged me and we didn’t speak of his enormous loss again.

Don and Ellen were living in Germany at the time of the raucous Thanksgiving reunion. Several hours into the cross-talking chaos of “remember when’s” and “I haven’t seen you since’s,” I ducked into the backyard and was flagged by three drunks on a patio deck. Two were my parents.

They insisted I get my palm read by Tante Jane, the most bohemian of Bill’s ex-wives. She wore many shawls, was air-quotes “fun crazy” and had the raspy timbre of a lounge singer. Before I could protest, she grabbed my hand and disappeared it into the Bermuda Triangle of her vast under-bosom.

As I noted her strength, Jane began reporting from the ephemeral realms. The news was bad. She shook her head reproachfully and proceeded to rip into my miserable, misbegotten soul.

“You have no love in your heart,” she concluded, swaying from side to side.

I shot my folks an, “Are you getting this?” look and got back tipsy grins. It was just me and Jane’s scathing spiritual assessment. She pulled it back at the end with puffy flattery, and it was a bit like having one’s bum powdered following a colonoscopy.

Released from her otherworldly grip, I flexed and counted my fingers. Jane’s son and daughter-in-law (or daughter and son-in-law) sheepishly thanked me for indulging her.

No problem, I said. Some day, when the world is paralyzed by contagion and the thought of gathering family in the same hot zone splits the country into screaming halves, I’ll write an unsolicited essay about the meaning of Thanksgiving. And Tante Jane will feature heavily.

The postscript happened the following winter. Uncle Bill was dead. His children arranged to disperse his ashes in Lake Tahoe’s, well, lake. The same Thanksgiving crew, plus or minus a few guests, boarded a chartered yacht and puttered out onto the gray water.

I watched Uncle Don make small talk with his and Bill’s rarely-seen little brother. Don had emphysema, but it wasn’t yet siphoning his every breath. It would be three years before the cancer filled his stomach and the surgeons cut Don to pieces trying to get it out.

I served my mom a rum and coke, which is the first time I saw the health nut drink either. She had multiple myeloma then and would soldier through it for another decade before the inevitable came. She sat with Jane, who was now carting an oxygen tank that fed two clear tubes into her nostrils.

Jane fixed me with mostly sober eyes and apologized for our last encounter. Intense discomfort formed a sort of vibrating heat layer around me. She assured me it was the booze and reefer talking—pedestrian spirits, not supernatural—and that she hadn’t really detected any repressed desires. Her words half-registered. I stammered out a total absolution to make it stop, this unnatural supplication by Grown Ass Woman to Awkward Manboy.

When Jane eventually shambled off to circulate, I scolded my mom for her unappreciated meddling. She threw back her shoulders and reminded me it was her inalienable right to lodge complaints on my behalf. Besides, it clearly upset me that Jane read my palm and concluded I was gay.

Mom repeated herself. Jane told me I was gay and that’s what upset me.

Is…that what happened? I wondered.

You know how someone will say something you know to be false because you lived it, but they’ll double down and you’ll question your own reality? Of course you do, you’re alive in 2020.

Somehow my mother had twisted the story of Jane’s reading into something else entirely. Maybe I shouldn’t have been surprised. In my teens, she made a semi-regular habit of visiting psychics, in part, to keep apprised of what was going on with her tight-lipped, broody sons. On multiple occasions, my brother and I found ourselves with the surreal task of defending ourselves against a psychic’s claims.

Maybe, to her, this was just another of those occasions.

As I tried to disabuse Mom of her version of events, I watched that distorted version circulate. I had been outed on a 70-foot pontoon named The Tahoe Princess and could only hope that, if there was an afterlife, Uncle Bill was there laughing his ass off.

Jane’s children and step kids took turns approaching me with shit-eating grins. More than once I found myself saying, “She didn’t say I was gay. She said I was a bad person.” Eventually I heard what that sounded like and stopped saying it.

At some point the funeral stopped being about my disputed sexuality. When it came time to see Bill off, we were handed helium-inflated balloons and asked to pen messages on them. I panicked trying to think of something to write to a man others knew and loved better. We scaled the cabin steps into the frigid air and held our red orbs against a gray-and-white backdrop. A fair-haired little girl read a poem to her grandpa. Balloons were taken by the sky. (Sorry about that, Tahoe. I know now that’s really irresponsible.)

And Jane, always the life of the party, grabbed the urn from someone and shook her ex-husband into a strong headwind. There was plenty of Bill to go around.

That was 15 years ago. I’ve attended many Thanksgivings and a few funerals since then. I sat silent and numb in a San Francisco ICU as what was left of Don vomited ice chips and looked resignedly upon oblivion. I held my mother’s hand as her body convulsed, hours after all recognition left her eyes.

Each holiday after a death feels like a Xeroxed copy of the one before. There are cliche acknowledgements of the absent person, but little profound is said. It’s like we remainders are actors in a play missing its lead characters, straining to keep the illusion going for a silent audience. Bill, Jane, Don, my mother—all these larger-than-life figures are somewhere else now. Or nowhere. I don’t really understand how death works.

I think of them from time to time, especially my mom. I think about how, if she were alive today, I would use a flamethrower to shoo people from her depleted immune system.

Don’t get me wrong. I, too, feel whiplashed by the events of this never-ending gap year, in which I sort of lost my job, bid goodbye to strangers, scream at relatives about positivity rates and basically feel like I’ve lost 85% of my mojo. Today I learned my Aunt Ellen contracted COVID-19 and that my dad saw her a week ago. Both are in their 70s and have been reluctant to interrupt lives from which so much has been taken. My arguments haven’t convinced them. But I’d rather be known as “the nag who shares depressing stats in the family group chat” to being an oblivious vector.

I’d give just about anything for one more adventure with my mom, one more opportunity for her to be accidentally hilarious, to botch a tale on my behalf, to unnecessarily come to my rescue. But Death closes a lot of doors. I refuse to help it.

If that means skipping a couple of turkey dinners, I have no problem with that. As long as it means avoiding the funeral too.

Love in the time of COVID-19

1 Comment on "A psychic aunt called me heartless at Thanksgiving. Things got weird at the funeral."