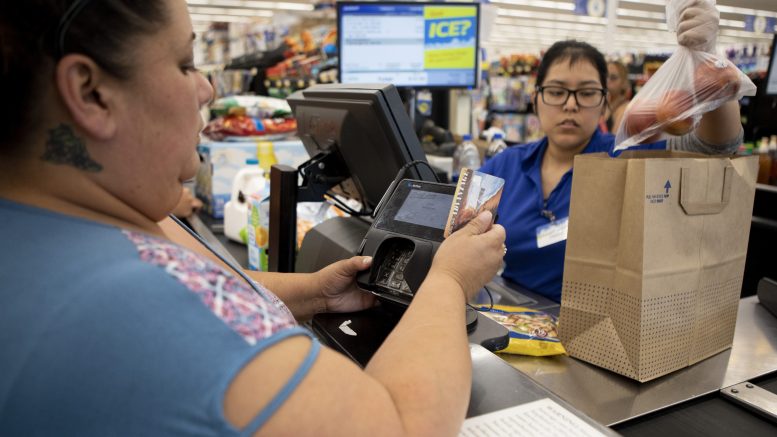 Antoinette Martinez uses CalFresh benefits to pay for her groceries. Latino and Black families in particular are struggling to afford food and rent during the coronavirus recession. (Photo by Anne Wernikoff for CalMatters)

Editor’s note: How bad will the pandemic get for families without more financial help? Three new studies show just how bad.

As politicians in Washington, D.C., haggle over what could be the last COVID-19 relief package before the election, new studies from progressive think tanks show how much is at stake for working families across California and the nation.

Without new legislation, the $600 a week federal unemployment supplement—which has helped many families stay financially afloat—ended the week of July 27. At the same time, eviction protections for renters are also about to run out in many places.

While a temporary $300 a week federal supplement helped 3.6 million workers until mid-September, it still left most with poverty-level benefits. Also, the new program’s eligibility rules were different: A worker must have at least $100 a week in state unemployment benefits.

That means 192,000 other workers won’t qualify, according to the California Policy Lab, and younger, less-educated and female workers are more likely to be left out.

Nearly one-third of all California workers have filed for jobless benefits since the coronavirus crisis began, according to a report by the California Policy Lab. The Aug. 6 report also found that without the additional $600 federal payment, half would receive benefits below the poverty line.

UPDATE: California is still down 1.7 million jobs six months into the COVID-19 recession, compared to 2.6 million in April, according to a study released Sept. 24 by the California Budget & Policy Center. About 657,000 of those are in the hardest-hit leisure and hospitality industry, which includes bars, restaurants, hotels and entertainment venues. And unemployment is especially bad for Californians of color, including 20% jobless rates among Asian-Americans, Blacks and Latinos, according to the analysis of federal labor data.

UPDATE: In late June and early July, about 1.9 million of California families with children reported not having enough to eat sometimes or often. That’s 16% of all households, and the rate was higher in Black and Latino ones, according to a report released Sept. 23 by the California Budget & Policy Center.

An earlier report from the California Budget & Policy Center warns that the coronavirus pandemic is worsening the burden of the state’s high housing costs. Poor families and people of color are most at the mercy of California’s affordable housing crisis—and they’re also the hardest hit by the coronavirus recession.

For instance, nearly half of Black households and 40% of Latino ones spend more than 30% of their income on housing. Those who lost their jobs to the COVID-19 recession are relying on the extra federal unemployment benefits to pay the rent. State benefits typically only cover less than half of a worker’s lost income.

“What we see is that families have struggled to afford housing due to high costs and years of discrimination, and now combined with job losses—all this puts Californians today at significant risk of losing a home or being unable to pay rent as the COVID-19 pandemic goes on,” Aureo Mesquita, co-author of the report, said in a press release.

In another study, the Center on Budget and Policy Priorities says that a growing number of families—especially Black and Latino ones—are struggling to pay the rent and put food on the table during the pandemic. The report estimates that 7 million children live in households that are behind on rent and that 8 to 15 million children didn’t eat enough because their families couldn’t afford it.

So the coronavirus relief package should focus on helping these struggling households, the center says. “Relief measures should be designed to reduce hardship so households can pay rent, put food on the table, and meet other basic needs and to boost the economy by creating a ‘virtuous cycle’ in which consumers can spend more, which helps the businesses where they shop stay in business and keep their workers employed, which in turn helps those workers maintain their own spending,” the report says.

And in a third study, the Economic Policy Institute says that cutting off the $600 weekly payment would be devastating for families. The money accounted for 15% of total wages and salaries in May, compared to the previous high of 2.5% in 2010 during the Great Recession.

Ending the payments would also damage the broader economy because that cash is being spent and keeping other employees from being laid off, the report says. Extending the payments through mid-2021 would boost the GDP by 3.7% and support 5.1 million workers, according to the study.

In a new analysis, EPI says that reducing the extra benefit to $200, as Senate Republicans are proposing, would cost 3.4 million jobs over the next year, including 557,428 in California.

All of these studies—and the alarm bells they sound—ought to be on the minds of leaders in Congress and Trump administration officials.

The Hill reports that progressive advocacy groups including MoveOn and the SEIU union are sending a letter Wednesday to congressional leaders warning that letting the $600 weekly payment expire would mean “economic calamity.”

Senate Republican leader Mitch McConnell says he wants to pass a stimulus package by Aug. 7, when Congress is scheduled to adjourn until after Labor Day. But Republicans, Democrats and President Trump are still far apart on what the package should include.

McConnell says he favors a package in the $1 trillion range that would include some more unemployment support and a second round of direct payments to families. But that’s nowhere close to the $3 trillion package that House Democrats led by Speaker Nancy Pelosi of San Francisco passed in May that includes $1 trillion just for extending the additional jobless benefits and for direct payments.

There are also disagreements, including among Republicans, on more money for COVID-19 testing and to help schools reopen safely, and on legal protections for businesses that reopen.

Working families are waiting to see if the politicians can make a deal during a contentious presidential election year. Of the many lessons the pandemic should have taught us, one is that partisanship gets in the way of the solutions we need.

Be the first to comment on "What’s at stake"