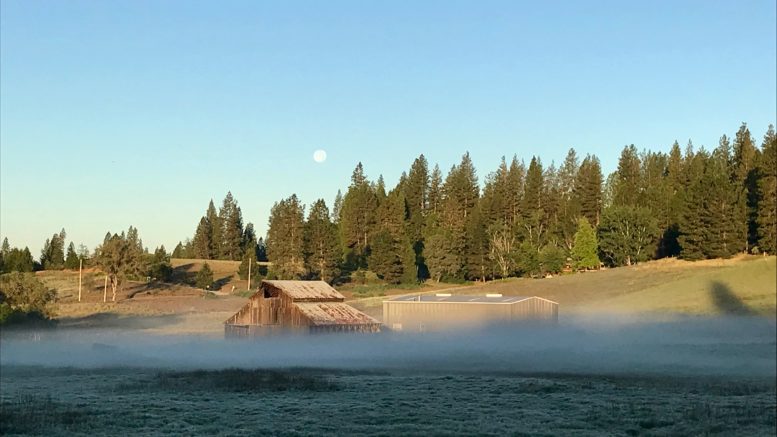 Farms and ranches across California will be counting on new water strategies in coming decades. (Photo by Scott Thomas Anderson)

State’s eco future is riding on reimagining how groundwater is recharged, moved and traded

For California water districts, 2020 has been a tough year.

A resurgent drought, record wildfires and mass unemployment have left many districts and their ratepayers scrambling. Amid these challenges, water managers must also plan to achieve the state’s mandate of full groundwater sustainability by 2042. On Nov. 17, the Public Policy Institute of California held a virtual conference to discuss experimental pilot programs that might help the state meet a critical moment.

California is currently the largest producer of crops and livestock in the nation, making $4 trillion and accounting for 11% of the overall U.S. agricultural economy. Yet scientists predict that warmer, drier conditions in the coming decades will threaten the state’s ability to remain a major breadbasket. The PPIC’s director of water policy, Ellen Hanak, began the conference with that sobering prognosis.

“In the past two decades, dry years have outnumbered wet years by three-to-one,” Hanak said. “Temperatures have been the highest in recorded history. The result is worse wildfires, less opportunity to replenish groundwater and degraded water quality in our rivers and lakes.”

Climate modeling indicates that groundwater will become increasingly important as surface water supplies from the annual Sierra snowpack diminish. This realization prompted the California legislature in 2014 to pass the Sustainable Groundwater Management Act. The law requires that the state achieve full sustainability for critically over-drafted groundwater basins by 2040. Jeffery Mount, a senior fellow for PPIC’s Water Policy Center, stressed just how difficult that goal will be.

“This is no easy task because we have been unsustainably managing groundwater for more than a hundred years,” Mount said. “So, changing course is going to be very, very difficult, with a lot of creative innovation needed. … The go-it-alone strategy is not going to work. And oftentimes, that is the case in California: We’re constantly fighting each other and going it alone.”

One new strategy for precise, cooperative groundwater sharing has emerged in Kern County, one of the largest and most complex water basins in the state. That’s where the Rosedale‒Rio Bravo Water District is piloting a program dubbed “the Craiglist for Water.”

District general manager Eric Averett describes it is an online platform that allows landowners to see their allotted groundwater supplies, or “water budgets,” and make targeted decisions about the usage. The platform also allows farmers and ranchers to enter into water market transactions, so those who have excess water on certain months can sell it to others who are in need. Averett said this ensures that no groundwater supplies are stranded.

“We want to jump-start this idea and hopefully scale it up to a larger level,” he noted. “So far we’ve been fairly successful.”

Methods of exchanging groundwater for surface water are also being explored. This is particularly true in Butte County. Though Butte is situated in a relatively “wet” part of the Sacramento Valley, it currently has a county ordinance that limits how much water can be exported to outside jurisdictions.

Paul Gosselin, director of the Butte County Department of Water and Resource Conservation, said the state’s groundwater goals are now compelling his agency to determine how landowners with different types of water rights can trade with each other, depending on conditions in a given year.

While there is currently no infrastructure to allow such water transfers in Butte County, Gosselin said local ag producers are looking to evolve their operations. “It’s really opened up a lot of those dialogues that hadn’t been occurring for decades,” he added.

But farming and ranching are not California’s only groundwater concerns. Numerous ecological systems across the state depend on groundwater and can be devastated if their basins are drained. One of the key speakers at PPIC’s conference was Sandi Matsumoto, director of the California Water Program at the Nature Conservancy. Matsumoto said that making the Groundwater Sustainability Act work will require water districts working more closely with environmental nonprofits on shared objectives.

As an example, Matsumoto pointed to a joint project now underway between the Nature Conservancy and the Colusa Groundwater Authority, one that is recharging a basin while also acting at a bird habitat.

“It’s that idea of multiple benefits,” Matsumoto said. “The Nature Conservancy brought the science about what the birds need and how they like their farm fields. And can we do that and sink water into the ground? It’s been an active pilot program for the last two years that has really promising results already.”

Matsumoto called it critical for water districts to stop contracting with hydrology consulting firms that don’t have experienced ecologists on their staffs. That, she said, can lead to environmentally risky assumptions getting built in to water projects. She ended her presentation by talking about taking her 9-year-old son on nature walks.

“What keeps me awake at night is that if we don’t radically change how we manage water in this state, 50% of the species in California that depend on fresh water could go extinct during his lifetime,” she said.