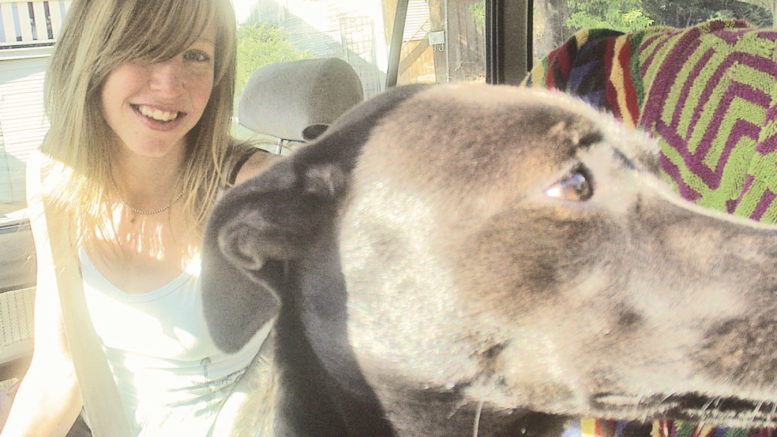 Two things to know about Allyson Seconds: She’s a woman who continually challenges herself, and she’s not particularly concerned with how you perceive her.

“Somebody was like, ‘Don’t you think it’s weird that people are going to know you as a weightlifter and not a musician?’ Actually, I’m neither of those things. I’m a person who does those things,” says Seconds.

And while neither of those things define her, the pandemic-related slowdown of one of her endeavors—the gym she owns, North D Fitness Collective—has resulted in more time with her music, including the re-release of her first album, 2009’s Bag of Kittens.

Its original release was came out quietly. “Totally fun project, no plans,” she says. “Just me wanting to grow, wanting to hear what I sound like.”

Seconds has been a singer since the start, but as a young child and into early adulthood, “it was always the harmony line. Always.”

That’s not a negative. She harmonized with friends including Kepi Ghoulie and with her husband Kevin, in addition to musicians as varied as the band Andrew Jackson Jihad and Sal Valentino of 60s staple The Beau Brummels.

But before Bag of Kittens, her sole turn as frontwoman was with New States, a short-lived band circa 1996 with James Williams and Nic Offer of the Yah Mos (Offer, later of !!!) and Tom Mackerness of Pope Smashers. Seconds categorizes their sound as “bossa nova garage,” lasting long enough for a Pacific Northwest tour, but not much longer.

While Seconds never stopped playing music, as the millennium hit, she expanded her list of projects to open True Love Coffee House with her husband. Though True love only lasted a few years, it was and is venerated as a welcoming venue for Sacramento musicians of all stripes, “slinging coffee” during the day to pay the bills.

In 2003, while Seconds was still co-running the coffee house, she began strength training, a love that would lead her not just to a new hobby but to a radical shift in her outlook.

“I realized I was kind of falling apart,” she remembers. “[True Love] was my first business, I didn’t know how to delegate, I was stressed out.”

She talked to True Love customer and Body Tribe gym founder Chip Conrad, who encouraged her to train with him. “I like learning things and I just said, ‘Yes, I’d like to do that.’”

Still, her shift to fitness was a surprise. “It was very organic, but I didn’t see it coming at all—100% nobody could have told me I’d be doing this for a living five years prior. I was like, ‘I don’t work out. I’m an artist and a musician. We don’t do that.’”

There is, of course, nothing contradictory about being a healthy musician, but feel free to insert your own Keith Richards joke here.

Five months of apprenticeship clarified Seconds’ commitment to health. “By then I was realizing, I need health, and strength, and I need to get back to myself.”

She stayed on, and 17 years later, she’s still running what’s now called the North D Fitness Collective. She describes it not as a gym but as a “movement sanctuary.”

North D isn’t gender-exclusive, but Seconds is committed to providing a positive space for all its clients. “Gym rooms have been dude territory, and I want [others] to feel like this [gym] is theirs.”

Like every business owner, Seconds has weathered pandemic closures as best she can. “What has the pandemic not done?” Seconds says, laughing. “It virtually shut us down for a while. We tried to move everything outside as soon as that was okay, just like restaurants, but then the wildfires hit and air quality sucked. So it’s just been a year of testing your tenacity and creativity, and I’m up for that challenge.”

Up for any challenge

“There is a theme in my life that is challenge,” Seconds says. As she’d challenged herself with weights in the early 2000s, she chose to challenge herself again in 2009, stepping back up front with her first solo album, Bag of Kittens.

“I got the idea in my head again,” she says of that first solo album. “I want to look back when I’m 80 years old and know I tried that…I wasn’t trying to become a known singer. I was literally trying to flex a muscle.”

“I’m not a songwriter, and I used to not be okay with that, because I was surrounded by songwriters,” she says. “And I was reminded by myself and by others who care about me and love my voice that you don’t have to be a songwriter… So I just created my own route.”

Her path was a collaborative one: “I thought, okay, I’ll reach out to a lot of these songwriters and ask them to write a song for me.”

While the initial plan was to gather songs from a wide circle of friends, the first song to come her way, “I Used to Say Your Name,” by Anton Barbeau, felt like she’d written it herself. “It had what I could call my vibe, I was just floored by it,” Seconds recalls.

What resulted was asolo album with songs penned completely by Barbeau, his instinct for her style the result of several decades of friendship.

Bag of Kittens came out quietly. The songs are indeed lovely. Seconds’ voice is reminiscent of Susanna Hoffs, best known for her time in The Bangles but who has also made some beautiful solo albums. Seconds is at the fore, but also tracked providing her own harmonies and those of collaborator Barbeau. Still, an album without promotion has a limited audience, and there was no tour to help spread the word.

More than a decade later, Seconds aims to reintroduce Bag of Kittens to the world. The re-release is available Nov. 17 on Big Stir Records.

“It was a meaningful time in my life to hear my voice,” she says. “It wasn’t like delving into my own ego. It was standing on my own.”

Bag of Kittens is available from Big Stir Records at bigstirrecords.com/allyson-seconds

Be the first to comment on "Flexing musical muscle"