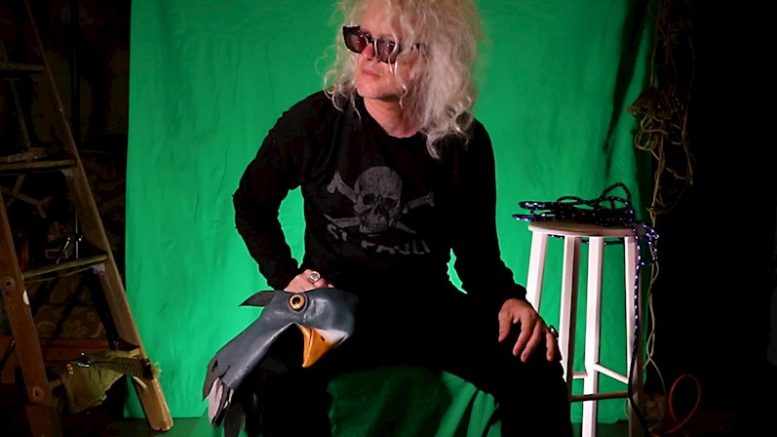 Musician Anton Barbeau is a Sacramento institution who…well, doesn’t spend a lot of time in Sacramento. Since leaving in 2006, Barbeau has traveled extensively—rarely in the same place for very long. His pre-pandemic home (as much as it is for such a frequent traveler) was Berlin, but Barbeau was in Spain when he saw Lady Bird, writer-director Greta Gerwig’s critically acclaimed 2017 “love letter to Sacramento.”

“So much of the film is set in very familiar circumstances. Half of the film is within a few blocks of my dad’s house. So it was very resonant in that sense,” Barbeau says. “I think originally after we saw Lady Bird, we thought, ‘Let’s make our own film called Manbird’—just kind of a joke where I wandered around the streets of Sacramento or whatever. But then I thought, ‘Wow, gotta make a song out of this.’”

Manbird evolved. That offhand joke did become a song and video, and that song grew to become an autobiographical double album with an elaborate, poster-sized album insert, an intentional homage to The Beatles’ White Album.

Barbeau acknowledges an autobiographical double album is likely not an ideal starting point for a new listener; it’s not an album that introduces people to what he jokingly calls “Anton’s bag of tricks.”

It’s true: Barbeau is known for standing proudly on the pop-psych side of the fence, but Manbird, spanning not just his musical career but all his experiences, requires songs that function as chapters of his life.

Similarly, “Back to the Egg,” with a title nod to the Wings nerds in the back of the house, is sweet and mournful: Back to the egg, black-eyed and bleeding.

“I think with this whole record, I’ve tried to be very careful, lyrically not to do filler lines,” Barbeau says. That tracks: whether singing about a childhood meeting with Reggie Jackson (“He was like the Beatles of baseball to me”) or feeling like an outsider as the city where he grew up changes (noting Sacramento’s “world-class parking meters”), there’s little doubt to his authenticity.

“It’s my hometown so I can kind of knock it, the way people can do that. It shaped me, whatever that means, I don’t even quite know.”

The knock on Sacramento’s increasingly homogenized landscape is a large part of what Manbird explores: What exactly makes a place home, and for how long?

“It’s my hometown so I can kind of knock it, the way people can do that,” he says. Still, “It shaped me, whatever that means, I don’t even quite know.”

Barbeau flew back to Northern California in March, his longest stint here since he left 14 years ago. “I just sort of grabbed a flight as soon as I could…and my flight getting out of Berlin was absolutely chaotic,” he recalls. “Canceled, moved, shifted, blah blah blah. Got home, here, as fast as I could. So one way or another, I’m here, I’m kinda grounded for the time being.”

And it’s while grounded in Auburn that Barbeau completed the video for “Manbird,” the album’s title track. In the video, Manbird-Barbeau travels through Sacramento via green screen in a gorgeous, elaborate, man-sized nest handcrafted by his partner and collaborator, Julia Boorinakis Harper.

While the “Manbird” video was originally meant to include scenes from both Sacramento and his home in Berlin as a reflection of  Barbeau’s own travel cycles, none of the overseas filming had started before the pandemic hit. Berlin only makes an appearance in the video as Manbird’s cover photo.

Manbird is scheduled for release on Sept. 18. Preorder it at antonbarbeau.bandcamp.com.

The land before ‘Lady Bird’