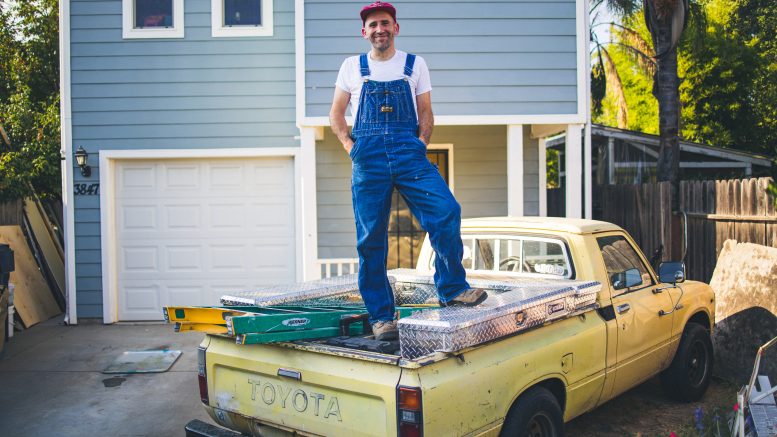 Musician Justin Farren in front of his Oak Park home.

Everything about musician Justin Farren has the Do-It-Yourself ethic baked in. The backyard of the Oak Park home he and his wife built from the ground up in 2007 doubled as a recording studio for his fourth album, Pretty Free. That album was a handmade affair, including an additional disc of Pretty Free played fully acoustically, a T-shirt and handmade booklet. At $100 a pop, it sold out in twelve hours.

Now, with production costs recouped, he’s decided to donate a portion of profits from the Oct. 8 re-release to the most DIY of charities: Habitat for Humanity.

“Honestly, I didn’t think that we would sell the first 100,” Farren says. “I thought $100 is way too much to ask of a single person, especially right now.”

But with the first run selling nearly immediately, Farren has hopes that Pretty Free’s second pressing can provide Habitat for Humanity of Greater Sacramento—and also the American Red Cross, which is assisting with wildfire relief—with significant donations. If the next pressing of 100 sells out at its original $100 price, he hopes to donate roughly $7,000 total

Habitat for Humanity provides a chance at homeownership to families who may not have a shot at affordable housing otherwise. The homes are built collaboratively with prospective homeowner and volunteers working side-by-side.

It’s not so different than Farren’s motivation for building his own Oak Park home, with the DIY seed planted during the early 2000s, when he and his then-girlfriend spent six months in Alaska. “[Alaskans have a] different set of ideas about what it is to be more self-sufficient, more community oriented,” Farren says, “because things need to get done in a timely way, before winter comes in order for everyone to have a safe and healthy winter.”

Make no mistake: the Do It Yourself The DIY ethic is rarely a lone endeavor, even during a pandemic. While it’s required some creativity, It’s one that has extended to Farren’s recording process and has allowed him to stretch both his creative and collaborative muscle.

“Brian Chris Rogers and I were able to do drums and, and rough guitar and vocal takes…last December [and] doing overdubs and stuff like that when the pandemic really set in,” Farren says. “And then we started just working remotely.”

That approach allowed Farren to work with friends in other states including Oregon and Texas as songs were reworked and evolved. “A handful of songs were sent off to different musicians,” he says. “They were just files that we traded on Google Drive. And then they would send me files back. So people recorded them in their own home studios and sent them back.”

And so Pretty Free was not just born but built, and its charitable DIY intention as well.

“Right out the gate, we had good luck, I think that we’ll be able to do it again,” Farren says of the upcoming October 8 re-release. “I feel like especially right now in the world, if there’s anything I can do that’s like unquestionably positive, just being helpful, I want to do it.”

Pretty Free is available for preorder at justinfarren.com