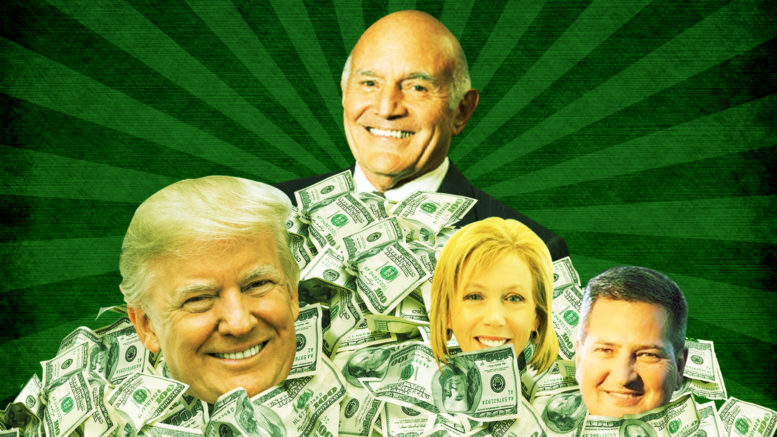 Sacramento building mogul David Lucchetti is willing to donate large sums to the causes he believes in. (Illustration by Serene Lusano)

Four years ago, before the world tilted, David John Lucchetti stood on a stage waiting to receive his latest honor.

It was May 2016. Sleep Train Arena’s curved hull shimmered from thousands of Sacramento State University students in black robes and caps. No one wore masks to ward off invisible microbes. Sleep Train wasn’t yet a triage center for critically ill COVID-19 patients. And no one associated the terms “shithole countries,” “children in cages” or “Chinese virus” with the American presidency.

These were simpler times.

Lucchetti, whose distinguished head sat stiffly on a satin gown, was there to receive an honorary degree for, as Sac State president Robert S. Nelsen phrased it, “his commitment to causes that benefit this region and the people of California.”

Lucchetti, a onetime P.E. teacher who took over his father-in-law’s construction business four decades ago, had received accolades for giving to various children’s causes, trying to keep the Kings from leaving Sacramento and dropping $18 million on a new pediatric wing that Sutter Medical Center named after him and his wife’s late father.

Since 2015, the president and CEO of Pacific Coast Building Products Inc. and dozens of related businesses has used more than $1 million of his personal and professional wealth to steer national, state and local politics to the right, an SN&R analysis of political spending has found.

Lucchetti has been the single biggest donor to Sacramento County’s conservative district attorney and sheriff and, this election, is spending hundreds of thousands of dollars to keep Donald Trump in the White House, reassert Republican control of the House of Representatives and defeat a California initiative to raise corporate property taxes.

These are the financial contributions that Lucchetti doesn’t promote or discuss. SN&R’s repeated attempts to interview him were ignored.

Four years ago, after the sash had been laid and the honorary degree conferred, Lucchetti offered two bits of advice to the young adults about to graduate into his world.

“What you do for yourself ends with you. What you do for others continues on,” he said. “And the other thing is, our future’s unknown, but we all know where we have come from.”

This is where Lucchetti came from—and where he hopes his money takes us next.

Origins of a mogul

The son of Stockton ranchers, Lucchetti attended what is now San Joaquin Delta College before transferring to Sac State in the 1960s. That’s where Lucchetti met future wife Christine Anderson on a blind date, according to a Sac State profile published when Lucchetti received his honorary degree.

Lucchetti, who played some college football, graduated in 1968 with a degree in physical education, married Christine, served in the Army Reserve and accepted a position as a history and P.E. teacher at Lodi High School. But this career path proved short.

“I had thought that was what I wanted to do the rest of my life,” Lucchetti told Made at Sac State. “But then I realized I wasn’t sure.”

In 1970, Lucchetti left education to work for his father-in-law, who was striking gold in the construction game and all of its ancillary veins.

Frederick Anderson Jr. started with an eponymous lumberyard in 1953, turned it into Pacific Coast Wood Products a decade later, acquired a couple of companies in 1971, a couple more two years later and so on. By the time Anderson died in 1997, Pacific Coast Building Products and its “family of companies” had evolved into a vast network of subsidiaries that make, move and install all kinds of building materials, from gypsum board to clay tiles, hardscapes to landscapes.

Under Lucchetti, who became company president around 1984, Pacific Coast continued layering its cake. The company has gone from grossing $750 million in 2002, according to the Sacramento Business Journal, to $1.2 billion this year, by one estimate.

Today, Lucchetti is associated with 29 businesses operating in a dozen western states and Hawaii. Nearly all of them are headquartered out of the same office suite in Rancho Cordova, state filings show. Pacific Coast Building Products serves as a holding company for seven of the businesses, the company’s website states.

Even companies that don’t list Lucchetti’s name on state business filings connect back to him, such as Pacific Coast Jet Charter, Inc., which advertises chartered jet experiences to the rich and environmentally indifferent, and La Squadra, LLC, a professional sports investment firm run by his son, Ryan.

As profits rose, so did Lucchetti’s profile. The California Homebuilding Foundation inducted him into its hall of fame. The Sacramento Metropolitan Chamber of Commerce named Lucchetti its 2004 Business Man of the Year and, four years later, its Sacramentan of the Year. Sacramento Magazine put him on its 2008 list of the 100 most powerful. By the spring of 2016, Lucchetti’s reputation was cemented with a sash and honorary doctorate in human letters from his alma mater.

Evolution of a political donor

According to the Federal Election Commission, Lucchetti has been giving money to Republican candidates ever since Bill Clinton was in office.

Lucchetti’s first recorded political donation came in the form of a $500 check to California Sen. John Seymour, a moderate Republican who would lose his seat to Dianne Feinstein during 1992’s “year of the woman.”

Both the Republican Party and Lucchetti’s political interests have skewed farther to the right since then.

In 2016, Lucchetti and his companies spent $50,000 to preserve California’s death penalty, $35,200 to elect Sacramento County Sheriff Scott Jones to Congress and $25,000 to make Republican John Cox the next governor. The latter two efforts failed.

In 2018, Lucchetti dumped $50,000 into a GOP fund called “Protect the House,” which was unable to prevent Democrats from seizing a House majority, and gave $33,900 to the National Republican Central Committee and $5,000 to the Great America Committee, which is run by Vice President Mike Pence. But Lucchetti also hedged his bets slightly during the midterms, giving $5,200 to Feinstein and $2,700 to Act Blue.

While Lucchetti didn’t contribute directly to Trump’s 2016 victory, he is all in on the reelection bid, heaping $45,600 to the president’s campaign and more than $23,000 to federal, state and local Republican Party committees, many in battleground states where the outcome of the election may be legally contested.

Lucchetti has also poured $121,000 into the National Republican Congressional Committee and $110,000 into Republican efforts to retake the House. At the state level, he spent $100,000 to defeat California Proposition 15, which proposes closing a tax loophole for commercial property owners with more than $3 million in holdings; gave $10,900 to the California Building Industry Association; and donated $10,000 to Californians for a Growing Economy and Safe Streets, a real estate PAC that’s behind a smear campaign in an Orange County supervisor race.

Meanwhile, Lucchetti might be getting the most bang for his buck on local elections.

Since May 2015, Lucchetti and two of his companies have spent more than $120,000 to reelect Sacramento’s antifa-trolling DA and sheriff.

District Attorney Anne Marie Schubert has benefited the most of any local candidate.

After his failed congressional bid, Jones ran for an unexpected third term as sheriff in 2018, and did so with $40,000 of Lucchetti’s money, more than Jones received from mega-developer Angelo Tsakopoulos.

Tab Berg, Jones’ frequent campaign manager, described Lucchetti as a significant political donor, but said those contributions were dwarfed by his charitable spending.

“Dave doesn’t have a foundation or big organization with an agenda,” Berg wrote in an email. “He contributes to individuals or groups he believes in.”

Lucchetti certainly believes in Schubert, which is why she’s lobbying to keep a new state law from limiting the amount she can receive from individual donors.

In Sacramento County, individuals are capped at giving $1,200 to county office-seekers—except when it comes to the top two law enforcement officials and county assessor, who can solicit and accept virtually any amount.

Starting Jan. 1, a state law will automatically lock in contribution limits for these politicians at $3,000 per donor—unless counties establish their own contribution ceilings.

Schubert is pushing hard to raise the cap to $25,000—and Lucchetti is a big reason why.

In gearing up for her 2022 reelection campaign, Schubert raised $10,230 through the first half of this year. Pacific Coast Companies, Inc., which handles the administrative workload for Luchetti’s building firm, was responsible for $10,000 of that.

This kind of spending on local races will be illegal if the county allows the state’s proposed caps to take effect next year.

Nicolas Heidorn, a consultant for Common Cause California, said the state’s impending cap is why the DA and her allies are trying to establish a limit more than five times the default amount.

“In other words, it may seem like they are adopting limits for these offices for the first time, but it is to preempt lower state limits from taking effect,” Heidorn wrote in an email.

After hearing concern from election watchdogs, the Sacramento County Board of Supervisors punted a vote until after the election.

Right now, it’s unclear whether Schubert would have to return any of Lucchetti’s money if the county enacts a lower cap.

“The right policy answer would be for it to be retroactive and have a grace period for candidates to return or donate excess funds,” Heidorn said.

As for Lucchetti, it’s indisputable that he reaches deep into his pockets for the causes he supports. He’s just not too keen to discuss all of those causes.