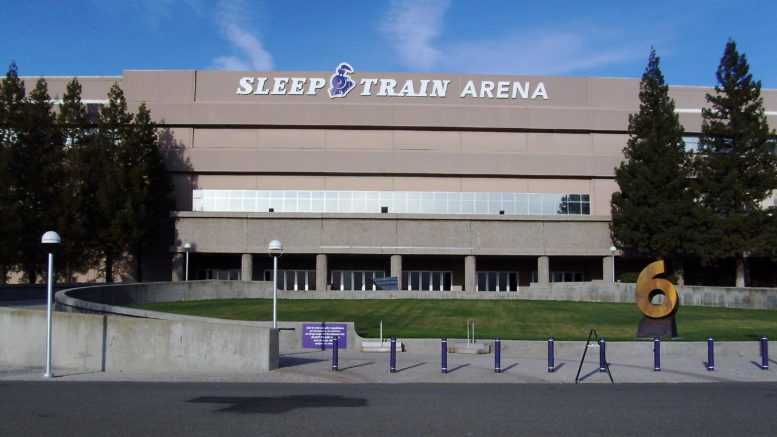 Sleep Train Arena, former home of the Sacramento Kings, closed in December 2016, much to the dismay of Natomas leaders. (Photo from Wiki Commons)

Once, Natomas leaders hoped that the Sleep Train Arena site would get a new life as a hospital.

But they were thinking of a high-tech medical center with thousands of high-paying jobs—not a makeshift hospital in the middle of a pandemic.

Here we are with the coronavirus crisis, however: The arena, former home of the Sacramento Kings, could soon be turned into a temporary field hospital with 360 beds for COVID-19 and regular patients. It’s one of more than 110 sites in all 50 states that the Army Corps of Engineers is feverishly working on to create room for the expected surge of coronavirus patients in the next few weeks.

UPDATE: On Friday, the state Office of Emergency Services and the Kings announced the conversion of Sleep Train and nearby former practice facility is starting.

“Our community has always come first, and that is more important now than ever,” Kings’ owner Vivek Ranadivé said in a statement. “The Kings are proud to help by providing additional space to accommodate a predicted surge in patients.”

Councilwoman Angelique Ashby, who represents Natomas, tweeted: “We are fortunate in Sacramento to have a space like the former arena to use during this time. Obviously, it is our hope that it won’t be needed. But if we do, it will be here – ready to serve our community.”

After the corps made the announcement on March 27, Ashby and Mayor Darrell Steinberg issued a joint statement: “We are working closely with the state on every possible option to increase hospital bed capacity as needed. There have not yet been any decisions made on any specific site.”

Jeff Beckman, president of the Natomas Chamber of Commerce, said Monday that he understands it’s a public health emergency and that the arena could be a good fit.

At the same time, he said, there will be residents anxious about bringing the potentially deadly virus into Natomas. “I have no say in it one way or another,” Beckman said. “That a tough decision for anyone.”

He and other business owners and community leaders in Natomas have been waiting—and waiting—for something to happen at the 84-acre Sleep Train site since the arena closed in December 2016 after Golden 1 Center opened downtown.

The Kings got the Sleep Train site, plus 100 surrounding acres, as part of the Golden 1 deal. City officials and the Kings have repeatedly pledged to find a “transformative” redevelopment plan, but have yet to follow through.

Beckman said the last time he met with Kings officials, in September, they again said that they were seeking the right offer.

“For everyone, it’s been very disappointing to not have any progress.”

The hospital plan fell by the wayside when Kaiser Permanente decided in 2015 to put a new medical center in the downtown railyards instead. Other ideas have included a technology park and an education campus. Most recently, a community group has pushed for moving the Sacramento Zoo from Land Park to the site. But that effort suffered a setback in November when the City Council declined to set aside hotel taxes generated in Natomas to help fund such a plan.

“For everyone, it’s been very disappointing to not have any progress,” Beckman said.

The last time I set foot in Sleep Train was in March 2018, when hundreds of personnel from the California National Guard, FBI, Cal Fire and other emergency agencies gathered for an all-day drill. The scenario: A 6.5-magnitude earthquake hits and authorities open a shelter at Sleep Train. But then armed terrorists get inside and blow up a supply truck with a dirty bomb.

This time, it’s not just a drill.

We’re in the middle of an unprecedented emergency that seems to get scarier by the day. When President Donald Trump, who initially downplayed the coronavirus, talks openly about the potential of 100,000 or 200,000 Americans dying, that should get everyone’s attention.

Be the first to comment on "Editor’s note: Wake-up call"