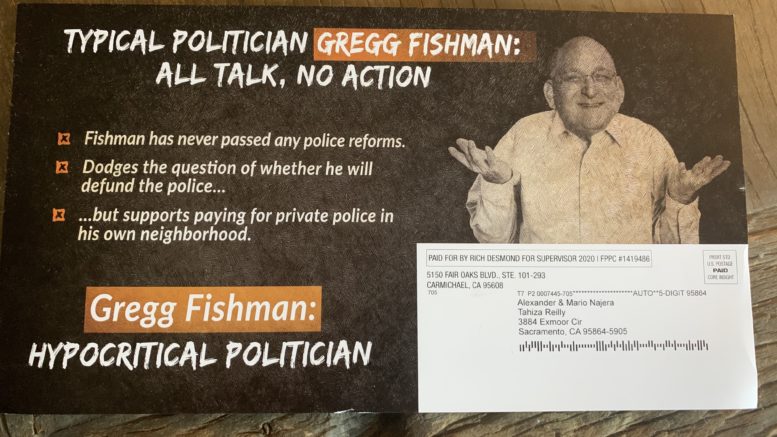 Gregg Fishman says the imagery in this mailer from opponent Rich Desmond is anti-Semitic.

The charges and countercharges are flying fast and furious in the final days of the race for a pivotal seat on the Sacramento County Board of Supervisors.

On Wednesday, Gregg Fishman called on Rich Desmond to apologize for a “hit piece” that he says is not only illegally deceptive, but also anti-Semitic.

The mailer calls Fishman a “typical” and “hypocritical” politician who is “all talk, no action” on police reform, even while private security patrols his neighborhood.

Fishman, who is Jewish, says after consulting with Jewish Federation Board, Mayor Darrell Steinberg and others, he believes that putting a photo of his face on top of a torso with hands raised in a “clownish gesture” is a “disparaging stereotype.”

“I have been a public person all of my adult life. I am used to the rough and tumble world of politics and campaigns,” Fishman said in a statement. “But this ugly anti-Semitic piece is raising fear and anger among the Jewish Community of Sacramento.”

“This is a last-ditch effort of a desperate campaign, and the absolutely false claim of anti-Semitic imagery demeans real anti-Semitism in our world,” the statement added. “This is simply an image of someone shrugging, a very common gesture…so common it’s used daily as an emoji in everyone’s iPhone.”

For his part, Desmond earlier posted a video complaining that Fishman and his allies are defaming him by unfairly portraying him as a partisan, right-wing politician only supported by millionaires. “This is simply not true,” Desmond says.

He urges voters to reject divisive national politics, saying: “We don’t need that at the local level.”

Desmond, a former California Highway Patrol commander who is the handpicked successor of Susan Peters, finished 12,629 votes ahead of Fishman, a member of the Sacramento Municipal Utility District board, in the March primary. Desmond led 43% to 26% in a five-candidate field.

The winner of the Nov. 3 runoff will determine the balance of power on the five-member board. If it’s Desmond, he would likely vote in a similar way to Peters and in tandem with Sue Frost. Don Nottoli would remain the swing vote on many issues.

If it’s Fishman, he would join Patrick Kennedy and Phil Serna in a majority that could change county policy on criminal justice, rent control and other priorities.

The election outcome could also decide the fate of county CEO Nav Gill.

Serna and Kennedy have called on Gill to resign after he hosted a department head meeting that violated public safety rules and led to a quarantine of several officials after one tested positive for COVID-19.

Gill has said he won’t step down. It would take four votes to fire him, and Fishman has already said he would vote to dismiss Gill for “gross negligence.”