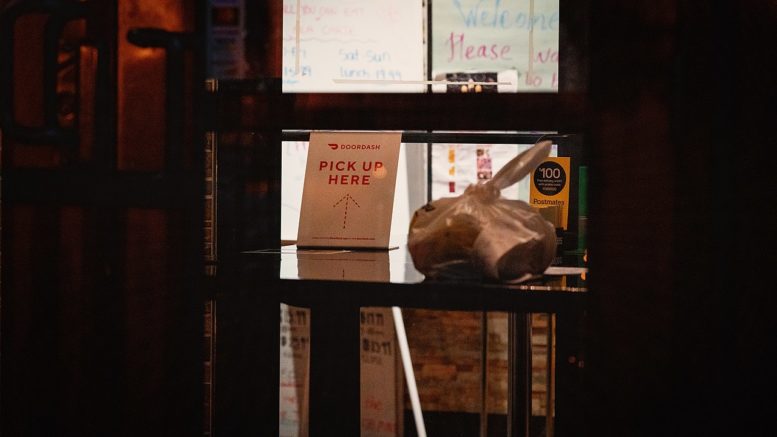 The California Restaurant Association warns that its members can’t make it just from take-out orders during the pandemic. (Photo from Wiki Commons)

California’s struggling restaurants have two major efforts on their menu to survive the COVID-19 economic collapse.

They’re pleading with patrons to dine out and to donate to workers in a new campaign during all of November.

At the same time, their trade group is supporting a potential class-action lawsuit that seeks to recover more than $100 million in fees paid by restaurants while shut down by public health orders.

California has nearly 60,000 restaurants that employ about 1.4 million people. The restaurant industry has been one of the hardest hit during the pandemic, especially cash-strapped, non-chain establishments. In September, the National Restaurant Association said that 100,000 restaurants—nearly 1 in 6—have closed permanently or long-term, that nearly 3 million employees were still out of work and that the industry is on track to lose $240 billion in sales this year.

On that bleak landscape, the California Restaurant Association is ramping up.

This week, its foundation announced that on Sunday it is launching “The Grateful Table Dine Out” event to encourage people to eat out and order take-out as often as possible to boost neighborhood restaurants. It is also asking Californians to donate directly to Restaurants Care, which provides chefs, servers, dishwashers and other workers with grants for groceries, rent, utilities and other basics. Since March, the program has helped nearly 1,200 workers, 79% of them people of color, the foundation says.

“We have the ability to support our favorite restaurants and chip in to help struggling restaurant workers,” Alycia Harshfield, executive director of the California Restaurant Association Foundation, said in a statement. “We’re encouraging every Californian to help the restaurant community get back on their feet leading into the holiday season. Your support directly impacts our neighborhood restaurants, the employees and their families, and together, we can bring them some much-needed hope and stability.”

But in many places, there are still restrictions on restaurants. For the last month, Sacramento County has been stuck in the red tier, which limits indoor dining to 25% of capacity or 100 customers, whichever is fewer.

Sacramento and other cities have tried to help restaurants stay in business, with direct aid and with programs to encourage outdoor dining. The Sacramento City Council approved $1 million for its Farm to Fork Al Fresco program, which has awarded grants to about 300 restaurants. Restaurants were also eligible for city loans to small businesses.

Still, the restaurant association says that many of its members face eviction because they were already dealing with rising rents and other costs. To keep diners safe, owners have had to buy personal protective equipment for staff and add outdoor seating, plexiglass dividers inside and other measures.

And owners are still on the hook for government fees and taxes.

This week, however, a lawyer filed claims on behalf of restaurants in Sacramento and four other counties to recover local and state fees for liquor and health permits and tourism charges. Other counties will be added, and the claims could eventually become a class-action lawsuit on behalf of all California restaurants.

A Sacramento County spokeswoman said the county does not comment on pending litigation.

Meanwhile, the restaurant association has worked with the state Department of Alcoholic Beverage Control to allow alcohol sales in outdoor seating areas and for pickup or delivery. It also asked the governor’s office for tax deferrals and filing extensions for small businesses, including restaurants.

The association had also asked for a delay in the scheduled Jan. 1 increase in the minimum wage—from $12 to $13 an hour for employers with 25 or fewer workers and from $13 to $14 for larger employers. Gov. Gavin Newsom rejected the request.

When will the show go on?