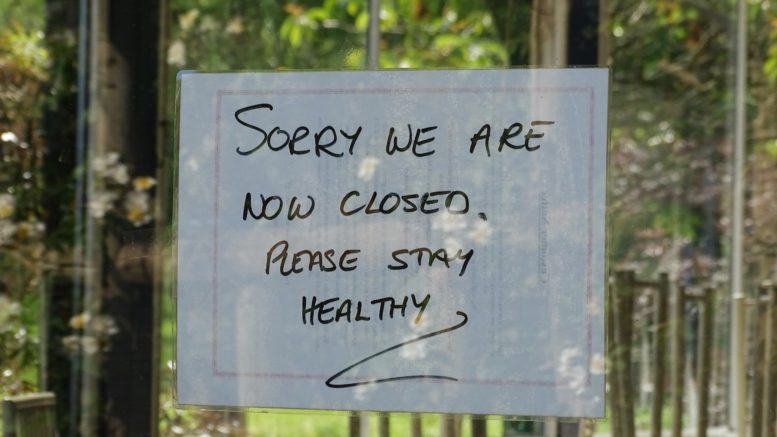 Photo by Belinda Fewings on Unsplash

But what about those businesses and groups that won’t follow the rules, and who might be creating coronavirus clusters?

County supervisors say that when the playing field is not level, it’s unfair to those businesses and groups complying with public health orders. If cases rise due to scofflaws and the county has to close down again, it hurts everyone.

And controlling coronavirus at workplaces is essential if Sacramento County is to reach its goal of reducing new COVID-19 cases and positive test rates enough to reopen more businesses by the end of October. The latest numbers out Tuesday show that the county has not lowered new cases enough to do that.

In their Oct. 6 report, public health officials told supervisors that while the vast majority of businesses and others are playing by the rules, they are on an honor system because it would be difficult to move to enforcement. For instance, the Sacramento County Sheriff’s Office made clear in June it would not enforce any mask requirements.

The county Department of Health Services said that of more than 5,000 businesses surveyed, about 4,000 said they were following social distancing and face covering guidelines. Complaints are received through the county’s 311 line; county Environmental Management and Code Enforcement respond with education.

Health Services Director Peter Beilenson specifically mentioned numerous complaints that a series of observances Sept. 27 to Oct. 3 by Flame of Fire Ministry in Rancho Cordova had exceeded the 100-person limit for indoor services.

But Supervisor Susan Peters warned that free speech is for everyone, not just protestors, and that the county must be “super-careful” about restricting religious groups. The county’s counsel said while some counties have prevailed in court for injunctions on worship services, Sacramento County has not taken that step yet.

About 10 constituents told supervisors that instead of more enforcement, they should end the local state of emergency, reopen all businesses and schools and stop mask requirements. But even if supervisors ended the local emergency, the county would still be under statewide public health orders.

Meanwhile, the city of Sacramento is starting to enforce an ordinance designed to protect employees on the job and lessen the spread of the virus.

The ordinance, which took effect July 15, requires businesses and workplaces to follow health and safety protocols, including daily cleanings and mask mandates. Violations can result in fines of as much as $25,000. Businesses that received COVID-19 relief from the city might have to repay the money.

Violations can be reported to the city’s 311 line. UPDATE: According to a Public Records Act request returned Thursday, 311 received more than 200 complaints of potential COVID-19 violations between July 15 and Oct. 7.

Some said employers weren’t giving time off to workers who had tested positive, or that infected employees were still on the job, or that workplaces weren’t being sanitized properly. Others concerned customers and employees not wearing masks or social distancing at restaurants and grocery stores.

Many of the complaints reported bars, gyms, nail salons, tattoo parlors and other businesses that were open before public health orders allowed them to operate. Other calls were about large gatherings, including house parties, religious services, weddings and sports events without permits. A good number of complaints were from outside the city of Sacramento and referred to the county.

Violations can also be reported to a job protection helpline (916 905-1625). The helpline, run by the Center for Workers’ Rights, has received only three complaints so far. But its executive director says that isn’t due to a lack of violations, but because of a lack of information about the ordinance and lack of enforcement by the city until a few weeks ago.

Employees can file a complaint and refuse to work, without pay. And employers cannot fire, discipline, discriminate against, retaliate against or reduce compensation for workers who do complain.

The state has done some enforcement; it sent out “strike teams” of inspectors to check on workplaces during a worrisome spike over the Fourth of July weekend. But the state—while urging businesses to “take every step humanly possible to reduce the risk of infection”—says enforcement is primarily up to local officials.

When workers complain, Cal/OSHA routinely sends letters to businesses, but only sends out inspectors in 5% of cases, CalMatters reports. And that inspection rate is far lower than in non-coronavirus cases.

Compliance by businesses—in addition to the behavior of families—will determine how quickly life will return more to normal.

As of Tuesday’s numbers from the state, Sacramento County was at 5.1 new cases per day per 100,000 people and a 2.8% test positivity rate. It also recorded a 4.0% positive rate in disadvantaged census tracts.

That’s a continued improvement from the two previous weeks, but not enough to be firmly on track to move from the “red” tier for substantial infection to the less restrictive “orange” tier for moderate risk.

To qualify for the orange tier, the county would have to lower new cases to fewer than 4 a day and keep the test positivity rate below 5% for two consecutive weeks. Or it could also qualify by lowering its test positivity rates overall and in disadvantaged census tracts below 2%.

So the soonest Sacramento County could move to the orange tier is Oct. 27.

Meanwhile, by staying in the “red” tier, the county can allow more schools to teach students in classrooms; Public Health issued a new order with guidelines for all grade levels to offer in-person instruction.

Even though Public Health continues to discourage gatherings outside immediate family, the new order also matches new guidance from the state on Oct. 9 to expand the circle to three different households.

But the agency also says that gatherings should only be outdoors and less than two hours, with social distancing, masks and hygiene. The gatherings shouldn’t include people who feel sick or in a high risk group, or include singing, shouting or other activities that increase respiratory droplets.

Also, names should be kept for contact tracing, and anyone who develops COVID-19 within 48 hours of a gathering should tell other attendees so they can get tested.

As of Wednesday, Public Health reported 462 deaths and 24,060 cases in Sacramento County.

Be the first to comment on "Is honor system enough?"