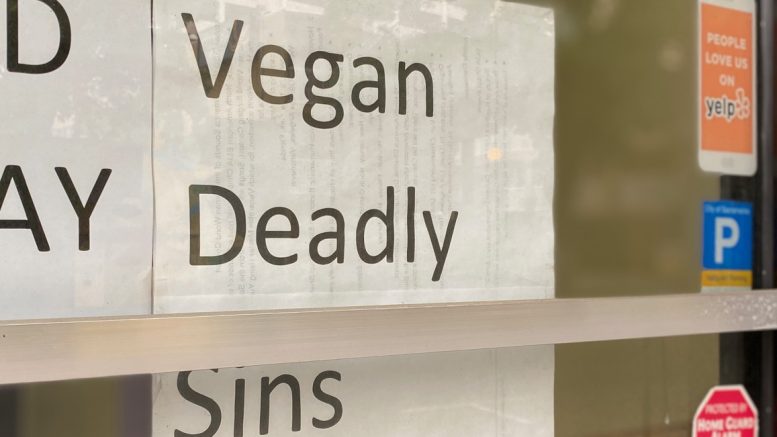 Vegan Deadly Sins: Pick-up only from the side entrance of E-Tea. (Photo by Lindsay Oxford)

Every Yelp review is the same: “I opened [insert food delivery app of choice] looking for something new, and Vegan Deadly Sins popped up. I had no idea it existed!”

Located within E-Tea at 900 15th Street, it’s a takeout-only restaurant of a style familiar to many longtime vegans: Asian-inspired dishes with the variety of mock meats that existed long before corporations suddenly decided even vegetarian food needed to “bleed.”

Its menu and presentation are in step with the competition, but also a confusing list of hits and misses. And oh—there’s part of the menu that’s not vegan. It’s in the dang name.

A brief detour to acknowledge my bias. I hate cutesy names in the food world. Absolutely despise them. More so when I can’t make heads or tails of why they got the name in the first place. Vegan Deadly Sins—what does that mean? Sin because it’s awful, or sin because there’s gluttony and perhaps even food-lust involved? I do know I’m not super keen on “deadly” in a restaurant name.

While there are plenty of dishes with simple names, there are places where Vegan Deadly Sins gets cutesy, as with “We Have Tofun Tonight,” “Pumpkin Non Stop” and, puzzlingly, something simply called “Cowboy.”

“I hate cutesy names in the food world. Absolutely despise them. More so when I can’t make heads or tails of why they got the name in the first place.”

It pains my grumpy heart to tell you that I really loved “Pumpkin Non Stop.” Of the several dishes I tried from Vegan Deadly Sins, it was my favorite, something I’d actively seek out. Firm slices of breaded, deep-fried pumpkin were simply seasoned with salt, pepper and jalapeno. What’s more, it was actual produce. Even my favorite vegan restaurants tend to go “meat” heavy, and I was happy to pretend that deep-fried goodness was somehow better for me.

Vegan Deadly Sins’ red bean paste sesame balls were excellent—but that leads me to another small gripe: The restaurant always tosses something complementary in the bag, and the day I ordered the sesame balls, my thank-you gift was…more sesame balls. It was a nice surprise, but I would have loved to have saved myself a few bucks or even used that extra cash to try something else.

With my other orders, that extra has been “Crunchy Rolling Pin,” an order of spring rolls that seem to be filled only with cabbage with no discernible accompaniment or seasoning. I had the same type of disappointment with the Tan Tan Noodles, a dish that’s known for a spicy peanut or sesame-based sauce (and, in the omnivorous world, often includes pork). While the noodles were well-cooked, they laid in a sloshy pool of grease as a lonely peanut drifted by. I didn’t get past more than a bite or two.

That said, there’s plenty on the menu that’s…well, it’s fine. It’ll do. The “My Love Together,” braised tofu served with broccoli and shiitake mushrooms, was nice, but lacked flavor. The Kung Pao “Chicken” was great, with a good sauce and featuring those fake meat disks we old-schoolers are used to. Unfortunately, the flavor and nostalgia trip were halted in their tracks when I ran into a crop of brown-tipped broccoli. Bummer.

Yelp users all found Vegan Deadly Sins through delivery apps, and many of them had the same complaint: The prices. With entrees about $16 apiece, Vegan Deadly Sin’s pricing is on par with vegan pop-up vendors, and with Beyond or Impossible burger-and-fries prices citywide.

App-based prices and tipping (you should be tipping everywhere you go, anyway, so don’t whine about that one) can drive those prices higher. Unfortunately, Vegan Deadly Sins needs to step up the basics—sauces, general flavoring…and yes, fresh vegetables—before warranting the price, in-app or out.

Be the first to comment on "Planet V Review: Vegan Deadly Sins"