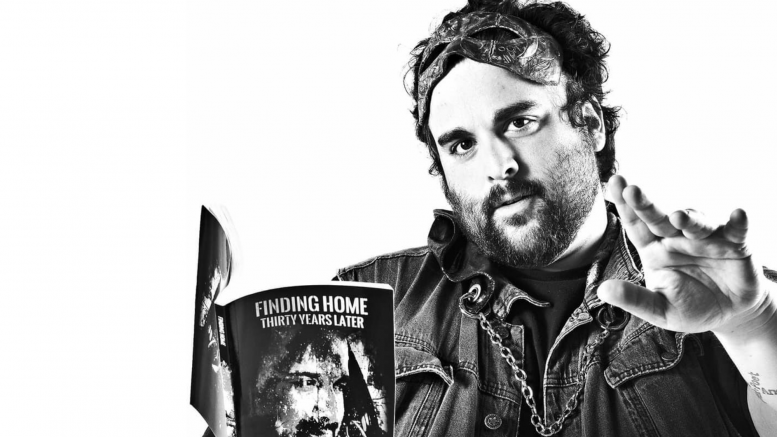 He says poetry saved his life. Now AndYes uses his words to share his experiences and uplift others

“It was the last discussion that he and I had together in person. He said that he finally understood it and that I need to keep going with it. And that was very validating because he’s one of the reasons why I started writing in the first place—just seeing what he would write out. I was like, ‘I want to do that too.’”

David Loret de Mola credits his late brother Frank as his inspiration to begin writing poetry. Moret, who goes by his pseudonym AndYes, began writing when he was 11 as a way to “dissect what was going on in my head.”

Growing up, AndYes says he was angry, would get into fights constantly and lash out in unhealthy ways.

“I would get the catharsis of beating someone up, which is very temporary. And then after that fades, I would basically turn it onto myself, and I would hate myself, which led to me attempting suicide attempted legitimately more times than I can count,” he said.

“I realized that corporate America might not have my best interests at heart. Go figure. And so I was going to have to make my own way. And what can I do? I know how to public speak, I know how to write poetry apparently. So I’m going to figure it out.”

But poetry provided a way to self-analyze rather than lash out. AndYes also credits a peer mediation program in New Hampshire that taught him how to understand himself.

“I don’t know why they picked me. I was the troubled kid who I would not picture being a good mentor at the time,” he said. “It’s one of the programs that changed my life–just being exposed to the idea of what positive discussion looks like and what being focused on fixing things, as opposed to being focused on how they’re falling apart, what that looks like.”

AndYes hasn’t stopped teaching, though he admits that he lacks the “godlike patience” needed to be a full-time instructor. Since 2013, he has visited classrooms to expose students to various art forms, including different kinds of poetry.

“It took me a while to actually get around to calling myself anything related to poetry ’cause so often in our education system, the idea of poetry is William Shakespeare in a monotone voice,” says AndYes, who calls himself a “punk poet.” “I’m trying to fight that.”

To pursue that goal, he has worked with organizations such as Planned Parenthood and has received grants to host workshops on self-expression and personal growth.

However, his career in poetry didn’t begin until he was fired from his job at Apple due to issues related to his depression.

“I realized that corporate America might not have my best interests at heart. Go figure. And so I was going to have to make my own way. And what can I do? I know how to public speak, I know how to write poetry apparently,” AndYes said. “So I’m going to figure it out.”

While he has been able to make his way, depression has made progress difficult.

“You have to be very self-driven, and a lot of days, especially during coronavirus and the pandemic, it’s been tough,” he said. “But I’ve been— for the past 18 years now— actively studying my symptoms and actively studying how I work my internal life, my internal mind, so that I can figure out when I’m in a depressive phase so I can put the right amount of work, so it doesn’t feel too daunting on me.”

Throughout the pandemic, AndYes has been working on a project he calls, Spoken Word Mondays. Currently in its fifth week, he plans to produce a video of his poetry every week for a year.

“I realized I only had like two poems and they were from like four years ago and I’m like, ‘I should really update and put out my current self to the world,’” he said. “It’s a daunting challenge. I’m trying not to focus on the 52 weeks of just week at a time.”

The first video, “Pretty Thoughts,” shows AndYes at Capital Public Radio reciting a short poem about being fat and wanting to be loved. Each word and gesture leads easily into the next line and even rapid fire alliterative verses come smoothly and precisely.

The poem is anything but monotone; there are moments when AndYes sings the lines, pausing just long enough to lead into the next bar. His eyebrows say almost as much as the poem itself.

It took months for AndYes to first step on the stage at Luna’s Café to recite a poem about forgiving a serial killer who had murdered his friend and about the needlessness of the death penalty.

“It was Frank who pulled me into Luna’s the first time,” AndYes said. “I loved the fact that people are getting up and expressing themselves, and even if it’s an ugly truth, even if it’s not the prettiest metaphor or the prettiest allegory, it’s still the truth about themselves. And that’s something I’d never really been able to express before vocally with others.”