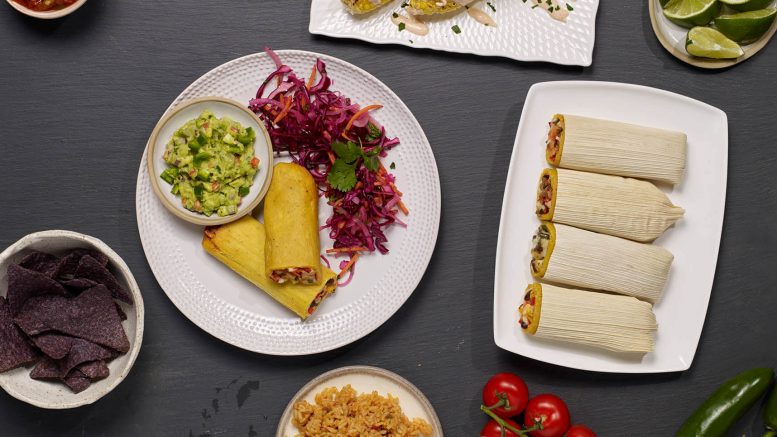 There’s a longstanding tension involving the expectation of multitasking and the mindfulness that is central to self-care. It’s also a battle borne out in the grocery aisle, as exhausted shoppers seek to find a balance between meals of utility and those of comfort—that is, being nurtured on both fronts.

It’s a gap Alpha Foods attempts to bridge with its line of microwaveable frozen tamales. The packaging touts the tamales as “plant based,” only referring to specific ingredients in each as “vegan.”

Depending on your side of the aisle, “plant based” is either marketing that avoids the much-maligned term “vegan,” or exactly the opposite—the worst thing you can call another vegan, akin to calling them a dilettante, or a junior varsity vegan.

Alpha Foods’ website is a little more loud and proud in proclaiming its product line as vegan. Unfortunately, their tamales are JV. Their use of the phrase “inspired by” and “with a twist” should be taken as a warning that comfort food is only a cursory part of the deal. Their tamales are, to quote the packaging, an “on-the-go” meal.

I have to admit the bias from my own emotional connection to tamales. Even in my ovo-lacto period, when I had tamales, friends made them especially for me, substituting the lard they usually used. I associate tamales with friends sitting around a kitchen table, socializing while we waited for a batch to finish steaming—warm memories of being both literally and emotionally nurtured.

It would be unreasonable to ask a mass-produced, single-serve product to do the same. However, as a vegan, that product is still in a way just for me, so why not give it a shot?

Even accepting that a mass-produced, “on the go” tamale wouldn’t be the same as handmade, I still had trouble coming around to the Alpha Foods iterations. Cooking instructions are included for microwave and for conventional oven, and I tried both methods.

The frozen tamales are wrapped in corn husks, just as fresh tamales (or even other, better frozen ones) would be, but without being steamed, the husks began to burn—especially as both methods required one-third longer cooking time (oven directions offered an oddly-specific 13 minutes a side). I removed the husks before the third iteration. Was I supposed to remove the husks before cooking? Nothing in the directions indicated.

In what I’m assuming falls into the “feature, not a bug” category, both cooking methods led to a hardened, crusty masa exterior, making it stiff enough to stand on its own. This is, presumably, what brings it into the handheld category of on-the-go-foods.

I was more fond of the faux-chicken fillings than the fake beef. The “Chick’n” (I really hate that word) versions had a better texture, more in line with similar Gardein versions. The “Beefy” version took me back to the earnest but slimy attempts at fake sausage from my earliest vegan days, circa 1996.

I will give Alpha Foods props for not overdoing it on the fake cheese. It’s common for vegan foods to be so proud of their faux cheeses that they are applied heavy-handedly, resulting in a mud-pie of goopy glop. The Alpha Foods tamales cheeses were present but subtle. Unfortunately, all three that I tried were light on seasoning with near-nonexistent salsa or sauces, to the point that I couldn’t really tell the “Chick’n” iterations apart.

In terms of nourishment and portability, both vegans and omni folks have plenty of options: wraps, pita (bonus points for a nice falafel), burritos and, lest we forget, the humble sandwich, literally invented for its ease of use. Adding a microwaveable tamale may be convenient, but adds nothing to the flavor nor social nourishment of the real deal.

Be the first to comment on "Planet V: Microwave tamales miss the mark"