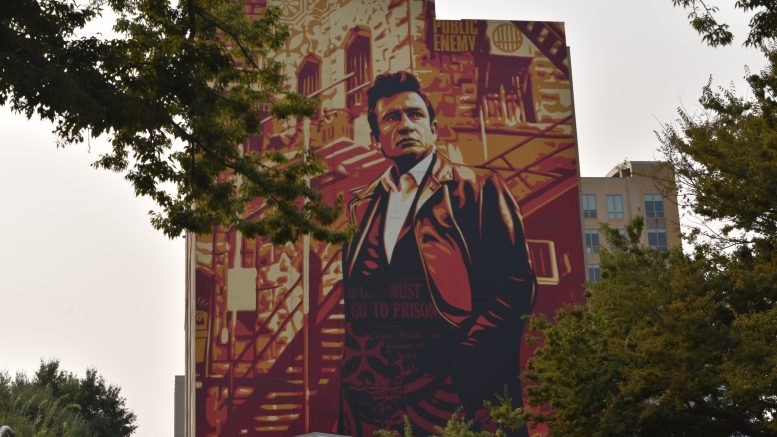 Raphael Delgado acknowledged the obvious: This year, Wide Open Walls will be different.

The annual festival, which has ushered in more than 100 murals throughout Sacramento since 2017, is slated to run Sept. 10-24. Just 13 local artists selected by Delgado, a Wide Open Walls board member, will participate this year.

That’s due to ongoing COVID-19 restrictions, though something else has been rippling through the festival, too. A city spokesman confirmed that the City Auditor’s Office is investigating founder David Sobon’s work with the city, including Wide Open Walls.

While the results of this investigation could take six to nine months, a review of documents by SN&R and interviews with several Wide Open Walls artists make clear the festival’s future is not a sure thing.

“There is a dark cloud…There’s questions that we haven’t answered,” Delgado said.

All the same, he knows one thing: “You can always count on the artists to perform and to do a great job.”

‘He can sell you just about anything’

“He’s kind of like ‘Better Call Saul’ in Breaking Bad,” Musser said. “He can talk. He can sell you just about anything.”

Sierra wrote to a Wide Open Walls board member in May, alleging a wide range of financial improprieties against her ex-husband. “He burns every bridge,” she said. “That’s how he operates.”

“Yes, we are being audited, that’s all,” he said. “It is what it is. It’s basically based on nothing but unsubstantiated information from an angry ex-wife. There has never been any other claims from anybody else.”

The results of this effort are highly visible. Look around the city at the legion of murals, particularly downtown, and there’s a good chance it’s connected to Wide Open Walls. People like Mayor Darrell Steinberg have been enthusiastic supporters. (SN&R has been a sponsor.)

UPDATE: The city has also financially supported the festival. In 2018, Convention & Cultural Services Director Jody Ulich executed a professional services agreement for as much as $50,000 with one of Sobon’s companies, David Sobon Events, Inc., “for costs associated with production of the Mural Festival event and for no other purpose.”

According to documents released Sept. 10 by the city in response to an Aug. 18 public records request by SN&R, Wide Open Walls treasurer Margaret Owens submitted a $50,000 invoice to the city in March 2018 that was paid one day later. Owens submitted another $50,000 invoice in August 2019, this time on the letterhead of Wide Open Walls, which gained tax-exempt status as a non-profit in June 2018, according to IRS records.

A form that Ulich signed in July 2019 stated that city “support of the Wide Open Walls mural festival is part of the Mayor’s Creative Economy initiative,” adding that the city had provided funding to the event in 2017 and 2018. Wide Open Walls was also able to use a City of Festivals grant in October 2018 to cover a $3,228.50 bill from the Sacramento Police Department for staffing and security during the festival.

“Yes, we are being audited. It is what it is. It’s basically based on nothing but unsubstantiated information from an angry ex-wife.”

Aside from Delgado, a dozen artists interviewed by SN&R say they have had, by and large, good experiences with Wide Open Walls.

Artists take a fraction of their commercial rate to paint in festivals such as Wide Open Walls, justifying long hours and sometimes harsh conditions with the rewards of public exposure, more social media followers and, sometimes, new clients.

And artists get to create works close to their heart. British artist David Puck, for instance, created three 15-by-15-foot murals in 10 days at Wide Open Walls in 2019 at $1,000 apiece.

Puck, who said he paints about mental health awareness and queer visibility, was visited while he worked on his murals by Steinberg, who wrote the Mental Health Services Act while serving in the state Senate.

“From my perspective and having worked on projects that are really bad and really do exploit people, I think that [Wide Open Walls] did really well,” Puck said.

Mabel Vicentef, a muralist from Buenos Aires in Argentina, also had a positive experience with the festival in 2019. She said Sobon picked her up from the airport, found her a place to stay and was “always asking if I needed something else.”

Stephanie Taylor, a local artist who participated in the festival in 2017 and 2019, said while Sobon could be “scattered as hell,” his heart was in the right place. “I know you can’t make everybody happy all the time, but he gets it done,” Taylor said. “I was really impressed.”

Still, artists’ experiences with both the festival and Sobon haven’t been uniformly positive.

New Zealand artist Elliot O’Donnell, who paints as Askew 1, received $2,500 to paint a mural during Wide Open Walls in 2017. The mural was painted over shortly after the festival, without O’Donnell’s knowledge, during a dispute over its content with its sponsor.

“You go to festivals that clearly are very artist-friendly,” O’Donnell said. “And then you go to ones that are not, where there’s something else going on, there’s another agenda. It seemed to me there was a political undercurrent, there was a lot of politicking going on.”

A possible reason for this: The perceived power of murals to boost land values in neighborhoods, such as where O’Donnell was painting. O’Donnell recalled Sobon telling him at an evening party during the 2017 festival, “That area is coming up, it’s going to be really great, and I just can’t wait to get rid of all the homeless people that are down there.”

Sobon denied making such a remark. He said he’d volunteered feeding the homeless 30 homemade burritos a day when he lived in Midtown and was sensitive to gentrification concerns with Wide Open Walls.

“Art is not going to move a homeless person out,” Sobon said. “Art will give them and all of our other citizens something beautiful to look at.”

“You go to festivals that clearly are very artist-friendly. And then you go to ones that are not, where there’s something else gong on.”

Musser painted a mural in 2017, receiving $2,500 as well. He also learned that prospective sponsors would gladly pay several times this to Wide Open Walls. Two months before the festival, Sobon included Musser on an email thread where a project manager for the Elks Tower Casino and Lodge agreed to pay $15,000 for a mural.

Although Musser returned to volunteer at Wide Open Walls in 2018, he reached his breaking point after attending a party—that Sobon had received $30,000 from a sponsor to host—in the Elks Lodge parking lot with lasers, a DJ, food trucks and people spray painting.

“To the people that have either been through it or know someone who’s been through it, it’s—and this is my opinion and an opinion of a couple other people—it’s not really looked upon with favor,” Musser said.

The disconnect has sometimes been pronounced between local artists and national celebrity muralists such the North Carolina-based Shepard Fairey, who painted the “Hope” portrait of former President Barack Obama and produced a sprawling mural of Johnny Cash at Wide Open Walls in 2018.

That same year, first-time Sacramento muralist Aik Brown said he waited four or five days just to get paint for his mural of Dia De Los Muertos in Oak Park. “It was like, ‘Hey, you’ll get your paint when you get your paint,’” Brown said. “I just kind of had to deal with it.”

Sobon confirmed past issues with paint, blaming previous curators and saying that’s why he’s producing the event himself.

Time is a critical factor in mural festivals, with many of the artists interviewed saying they worked all 10 days to finish, some starting at sunrise, taking a midday break from the Sacramento heat, and then working until dark.

Lifts and lighting aren’t always plentiful in the evenings. San Francisco-based artist Cecelia Perez said she had to work on top of her boyfriend’s truck with its light bar on while painting last year.

“From my experience, it was kind of disorganized,” Perez said.

Sobon is listed in the tax return as receiving no compensation for working 40 hours a week for the festival, though Wide Open Walls gave $12,000 to David Sobon Events Inc. Meanwhile, treasurer Owens received $14,063, while secretary Patrick Harbison got $6,250.

But Sobon, himself, is a different story.

Another federal lien went to Sobon and his second wife, Laura Sobon in 2010, totaling $90,376 for the 2003 and 2004 tax years. Laura Sobon said the lien originated because her ex-husband didn’t refinance a house out of her name that she deeded to him after they split in 2006.

“His lifestyle’s extremely extravagant. I live without, and I still have to pay taxes because of him,” Laura Sobon said.

But Owens, the treasurer, insisted during a brief phone call: “There’ve been no improprieties whatsoever.”