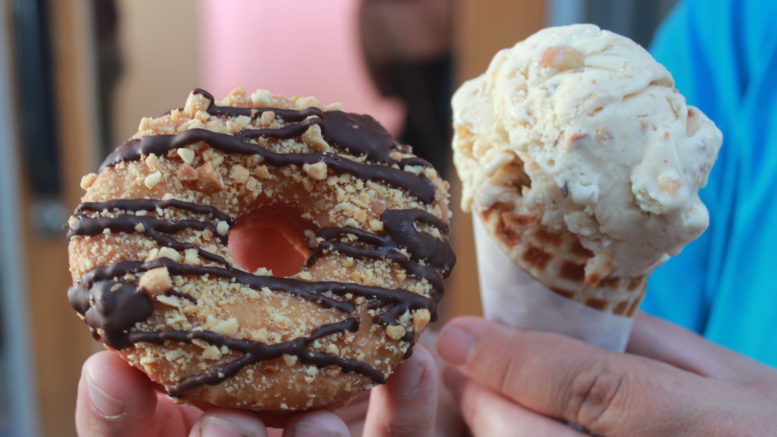 The Andre 3000, a vegan brioche doughnut with caramel glaze, dark chocolate drizzle and crushed peanuts is one dense pastry. But a Peanut Butter Drumstick waffle cone is delightfully superb. (Photo by Steph Rodriguez)

For years, my father worked graveyard shifts at a shingle plant in Shafter, a small town in Kern County. He slept while my brother and I were in school and he worked long hours while we were home. But sometimes, as the sun crept over the horizon, he’d wake us up with, “I bought doughnuts.” We’d spring out of bed and run to the kitchen where a square, pink box held all of our favorites: old-fashioned, maple and chocolate bars, blueberry cake donuts and classic rainbow sprinkles. We’d sit at the table and talk about our days and listen to how his nights had been as we enjoyed the early morning together.

I held onto this memory as I stepped into Milk Money, a sweet shop located in Midtown’s Ice Blocks corridor, where small-batch craft doughnuts and ice cream are served six days week. At Milk Money, the doughnut of the day is posted on Instagram at 6 a.m. and it sells out quick. Its offerings are playfully named such as A Lime Called Quest, Clockwork Orange and other fun variations, including Hello Kitty, Ludacrismis and Figgy Pop ($3.50 each).

One evening, my family and I stood in line under the pink neon sign that read “Makin’ dough” and found out that the Andre 3000 (a vegan brioche doughnut with caramel glaze, dark chocolate drizzle and crushed peanuts) was the only doughnut left.

As fans of hip-hop duo Outkast, we ordered some, plus doughnut holes ($3) and a waffle cone packed with Peanut Butter Drumstick ice cream ($4.50). The doughnut was very dense instead of the light and fluffy sweets of my past. Sure, dark chocolate and peanuts are a pair made in confectioner’s heaven, but that’s nothing to write home about.

The doughnut holes were also heavy. The ice cream, on the other hand, was superb: creamy, salty and sweet with all the familiar flavors one would expect from the words Peanut Butter Drumstick.

On our Sunday morning visit (we weren’t going to miss out on variety this time), we ordered the two options behind the dessert case: The Milk Money and a classic lime-glazed doughnut with rainbow sprinkles. We also snagged a scoop of peach ice cream ($3.50) and an ice cream sandwich ($8).

The sandwich is customizable depending on what cookies and ice cream are available. We ordered a peanut butter cookie sandwich with soy vanilla ice cream, which had a chalky flavor that didn’t hold up well when sandwiched between two cookies that tasted as though they’d been left out all night. The standout during this visit was the peach ice cream, which tasted like grandma’s peach cobbler: savory, buttery and packed with bold peach flavor churned into a single scoop.

Milk Money’s house pastry is an orange creamsicle-glazed brioche doughnut with coriander and brown-sugar streusel. It’s absolutely delicious. Its use of coriander was just enough to give the doughnut a warm, spicy fragrance that plays nice with this sweet treat. The pastry dough was thankfully not as dense as the Andre 3000. Instead, it was sturdy enough to dunk into coffee, but rich and tender like brioche. The lime glaze on the rainbow-sprinkled version was a bright and delightful citrus twist on this old-time favorite that reminded me of Trix cereal.

As my son and I shared a rainbow-sprinkled bite, I was reminded of those early mornings waking up to that pink box filled with glazed goodies. Whatever the occasion, Milk Money may be the place to treat your inner sweet tooth.

Be the first to comment on "Review: Treat yourself"