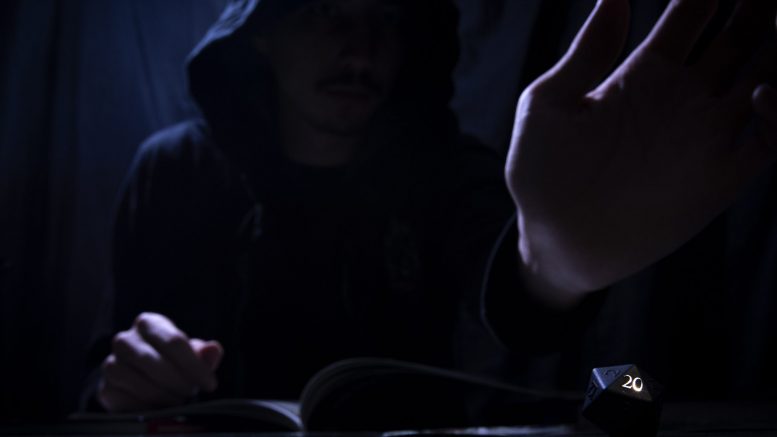 Break out your dice and get ready to roll those Nat 20s while the stay-at-home order persists.

You’re standing in front of a simple wooden door with a brass handle. When you press your ear against the tattered wood, you hear depraved snarls and the unmistakable sounds of claws against a concrete floor.

What do you do?

In real life, you probably wouldn’t open the door. But in a tabletop role-playing game, a reasonable response could be kicking it down—sword drawn— ready to face whatever waits on the other side.

So what is really behind that door? Find out in “Journey to Scovidria.”

Tabletop role-playing games have existed since E. Gary Gygax and Dave Arneson first published “Dungeons & Dragons” in 1974. In the game, the “Dungeon Master” creates an imaginary world for players to participate in writing a story.

Since stay-at-home orders took effect in March, D&D and other role-playing games have increased in popularity, providing a reprieve from unpleasant realities and offering a fantasy world entirely of your own creation.

During the COVID-19 pandemic, Kiefer has used an online service called Roll20.net to play D&D with professional writers across the country.

When Kiefer began playing D&D at age 12, he already had an interest in writing, but D&D offered something unique—collaborative storytelling.

“It’s a way to write a novel as a group, and it’s actually pretty hard to collaborate in a narrative way in any other form—at least that I’ve found,” Kiefer said. “The [Dragon Master] can give you a framework, but you can radically change the framework. You can just turn and leave the map if you want to.”

In his current adventure, Kiefer’s teenage cleric Tortle is joined by Naomi Williams, a Sacramento writer and author of the novel Landfalls who had never played D&D before Kiefer invited her.

Williams says that as the pandemic, heat wave, wildfires and “the upcoming election and the dismantling of democracy” have given her more and more to worry about in real life, D&D has provided an outlet to a fantasy world where those problems can be set aside for a while.

“You’re able to have a situation occur and you can discuss at the table, ‘What’s going to happen?’ It all helps you view aspects of life outside of that game in a whole different way.”

“D&D has been a big spot of joy in my life. I think it can be easy to feel guilty for feeling any joy, and that’s actually not good,” Williams said. “It’s okay to take two hours and just, you know, kick the s–t out of bad guys and help your friends.”

More than a game

While tabletop role-playing can be an escape, Vincent “Scooter” Hamilton, who runs the Sacramento community group Time2Tabletop believes that the games can provide more than fantasy. For the past three years, Hamilton has incorporated their cathartic experience to teach social and emotional skills in schools.

“They can deal with the real mess going on around them in a safe way instead of going, ‘So why do you think you’re having troubles with Tommy?’ Nobody wants that,” Hamilton said. “It really does let you get yourself out in the open.”

During the pandemic, Hamilton says Time2Tabletop has continued to meet for Tuesday game nights on Twitch.tv. He’s also teaching new players how to play online through the group’s Facebook page.

“A lot of people have gotten more into D&D because they’re like, ‘Man, I’ve always wanted to try this.’ Now it’s there,” Hamilton said. “We don’t have to make time to do it. The time is right in front of them.”

Yet, the financial difficulties caused by the pandemic have made maintaining Time2Tabletop difficult.

“Two of our biggest streams of revenue was, of course, working in the schools with curriculums, and the other one was putting on six or seven events per month at local breweries,” Hamilton said. “We were like, ‘Okay, we can’t do that.’”

Hamilton isn’t alone, Abbie Delozier-Harris, owner of Tables & Tales game store in Elk Grove, has also lost revenue due to canceled events. “We lose about $10,000 a month with no events going on,” she said.

But she says that the loss is more than financial. “It’s been especially difficult on a lot of the people who have social anxieties and things like that because a lot of time this is the place that they’re coming,” she said. “Now they’re isolated.”

According to Delozier-Harris, playing games such as D&D can help children and adults alike develop critical thinking skills in an environment that allows them to take risks without fear of real-life consequences.

“You’re able to have a situation occur and you can discuss at the table, ‘What’s going to happen?’” she said. “It all helps you view aspects of life outside of that game in a whole different way.”

Delozier-Harris says that though her store is unable to host in-person events, online tools including Zoom and Discord are effective ways to get started playing the game.

Discord communities such as Sacramento PC Gaming Group provide ways for people to meet despite social distancing guidelines. For Christopher Yang, playing online is a necessary precaution for his members, one of whom is older than 70.

Yang first began playing in 2001 and met his group through Adventurers League, the official campaign of D&D publishers Wizards of the Coast.

“That group’s been pretty steady, which is rare because most of the time you can’t really get people to play longer than a couple of months,” Yang said. “We’re on year two of playing together, so it’s been a long time.”

Currently, Yang is the game master for his group playing “Pathfinder.” He says that people who want to learn to play shouldn’t worry too much about the rules and simply learn as they go.

“If you just start a game and just start playing it, when you come up against scenario that you had experienced before, you can just see what happens when you get there,” Yang said. “It’s so much easier to just play, than trying to learn every single rule.”

His perspective is echoed by many players. “They give you all the rules you need, if you’re a rule follower,” Kiefer said. “But a lot of time you could just go, ‘I’m going to try to scale the fence.’ Okay. Roll a D20, and then you just sort of ballpark.”

The sentiment is repeated in the official rule book for D&D: “The D&D rules help you and the other players have a good time, but the rules aren’t in charge.”

2 Comments on "Adventure in place"