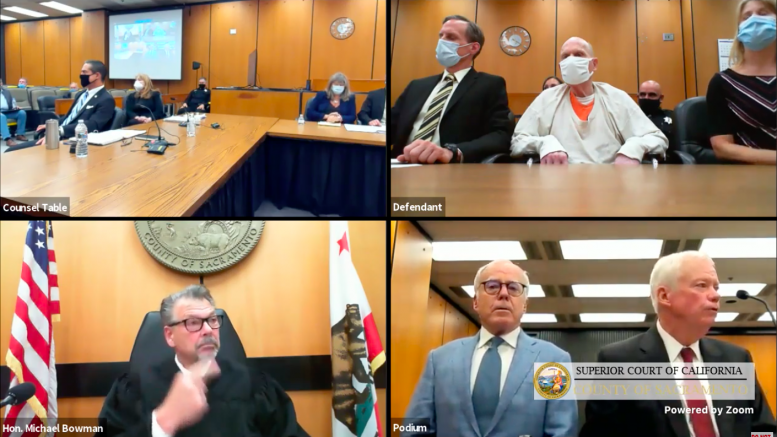 Bruce and Rob Harrington address the court during the third time of victim impact statements in the sentencing phase of Golden State Killer Joseph DeAngelo. DeAngelo murdered the Harringtons' youngest brother Keith and their sister-in-law Patty in Orange County in 1980. The brothers later advocated for a DNA collection law.

In his final public moment, Joseph DeAngelo couldn’t muster the courage to look at them.

One after another, the women stepped to the courtroom podium and told their stories. Onetime newlyweds, fiancees, Sacramento transplants and native daughters towered over him as he sat unmoving in a wheelchair prosecutors said he didn’t need. They spoke calmly and directly about the night a masked, muttering psychopath invaded their homes and tried to infect them with his smallness.

More than 40 years after he slunk away into the night, they faced him in the light and showed him he failed.

The serial predator who was called the East Area Rapist, Golden State Killer and a half-dozen other nicknames before he was identified as DeAngelo in 2018 would always be small. Soon he will be nothing.

The 74-year-old DeAngelo was sentenced Friday to die in prison and have his remains unceremoniously dumped in a pauper’s grave. The Aug. 21 sentencing followed three days of wrenching statements from survivors of his violent sexual assaults and from loved ones of the 13 people he murdered, often in barbaric fashion.

Michelle Cruz spoke Thursday about her sister Janelle Lisa Cruz, DeAngelo’s last known victim. Janelle was 18 on May 4, 1986, when DeAngelo infiltrated their family home in Irvine and entered her bedroom. Michelle, one year younger than her sister, described a gruesome attack. Janelle had recently gotten her braces removed. Medical examiners found teeth in her hair and lungs and indentations from wrist and ankle bindings, Michelle said. The family was forced to keep her casket closed during the funeral.

“I feel sorry for his soul,” Michelle said.

She said she became consumed with finding her sister’s murderer, spending six to eight hours a day rearranging clues, quizzing investigators and talking to reporters and other victims’ relatives. She said she moved often, trying to elude the invisible monster she hunted and suspected was hunting her.

That all ended in April 2018, when a surprised DeAngelo opened his door to authorities and could only say that he had a pot roast in the oven. A task force dedicated to the decades-old cold case had uploaded a preserved DNA sample to an open-source genealogical site, finding a partial match that eventually led them to to DeAngelo’s Citrus Heights home.

“No more thinking he would try to find and kill me too,” Michelle told the court. “Now my life is no longer concentrated on finding out who killed my sister.”

For the first time in three days, DeAngelo tilted his head in the direction of the speaker, but kept his eyes averted.

Michelle continued in a steady voice. He’s just a vicious rapist and murderer, she said, “Nothing more. I hope he rots.”

She’ll get her wish.

‘You have been defeated’

Friday’s sentencing closed a dark chapter that began in 1973, when a string of ominous break-ins began in Visalia. That was the same year DeAngelo got married and began working as a police officer in nearby Exeter.

DeAngelo, who confessed last month to more than two dozen horrific crimes in exchange for a sentence of life in prison and not the death penalty, committed his first murder in 1975, when he shot the father of a girl he attempted to kidnap. The next year, while he was working for the Auburn Police Department, DeAngelo began a series of home-invasion rapes in the eastern suburbs of Sacramento County.

It was one of those suburbs, Rancho Cordova, where five attacks occurred, that a young couple walking their dog encountered DeAngelo in 1978. Brian and Katie Maggiore ran. He pursued and gunned them down.

By this time, DeAngelo had already begun committing rapes in other cities—Stockton and Davis, then down into Contra Costa and Santa Clara counties. Authorities and the media dubbed him the East Bay Rapist.

Then he migrated to Southern California, where he targeted homes with young couples whom he’d bludgeon to death, earning nicknames like the Diamond Knot Killer and Original Night Stalker.

On Tuesday, several of DeAngelo’s Sacramento survivors addressed the court about the confessed serial rapist and killer’s lack of humanity. They shared with withering frankness how he whined to his mother, wandered their kitchens and scurried away with wedding rings and other trophies following his sadistic attacks. One was a 22-year-old newlywed new to California when DeAngelo crept into her home, bound her husband and raped her.

“I’m not that same person today,” she told him. “I forgive you. Kindness is a sign of strength, not weakness. This is for me, not for you.”

The mother of Debbie Strauss, a DeAngelo rape survivor who died of cancer in 2016, two years before her perpetrator’s arrest, said Strauss departed this life with a grace and legacy DeAngelo would never know.

“Her children and grandchildren are left with the memory of a fair and just person,” Dolly Kreis said of her late daughter. “The legacy you leave for your children and your grandchildren is one of a serial murder, a serial rapist, a serial thief and a serial terrorist. … What a despicable piece of humanity you are. Today, Joseph DeAngelo, you have been defeated.”

A beautiful garden, a big sale