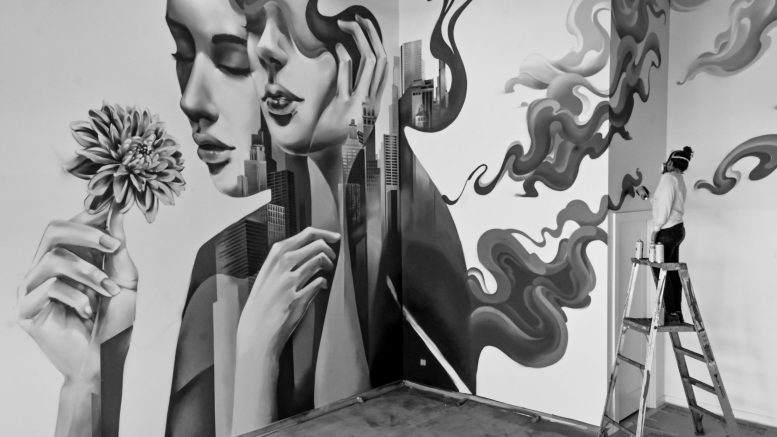 Franceska Gamez is co-founder of 1810 Gallery, a member of Trust Your Struggle Collective and co-organizer of Art Hotel and Art Street

“1810 really started because we couldn’t find many places that wanted to show our s–t,” says Franceska Gamez. “There wasn’t enough contemporary, lowbrow spaces that really wanted to touch on street art.”

When Gamez co-founded 1810 Gallery in 2015, she wanted to create a space that would feel more like a community than a traditional gallery. However, the business side of the art world caused Gamez to begin neglecting her own work as an artist.

Gamez said she had wanted to be an artist since she was seven. A class project in third grade asked, “What do you want to be when you grow up?”

However, when she moved to Sacramento for college, she found it difficult to even know where to begin her artistic pursuit.

“I started off as a business major,” she said. “I knew that art was the thing in my life, but at that point, there wasn’t really much of an example for me to even know what being a freelance artist is and how to even begin that kind of hustle.”

She was born in the Philippines and raised in the Bay area. Coming from an immigrant family, she said there was some pressure to find a more financially stable career.

It wasn’t until her second year as a business major that a sculpture professor convinced her to “come to the dark side.”

“It was ran way more legit as far as having contracts, a business license, all those things, it kind of really opened my eyes. I was like, ‘Damn, I should have really stuck to my business major.’”

“At the time I was still super scared to take the leap and do this for me,” she said. “He, for lack of better words, really brought me under his wing and showed me how to hustle.”

They embarked on one of their first collaborative efforts in 2013, a small studio space in an apartment on Tomato Alley, where Gamez began to push herself in her art, surrounded by fellow artists including Waylon Horner, S.V. Williams and Molly Devlin.

“That was really when I got my foot in the door and met a ton of amazing artists, ’cause it wasn’t just like a studio gallery space,” Gamez said. “It was kind of all around like a creative hub.”

To pursue her art, Gamez needed to make sacrifices, including lowering her standard of living.

“We lived in this janky-ass house where my rent was like 300 dollars… sharing a three-bedroom house in Midtown with like six, seven people,” Gamez said. “It taught me a lot, ’cause now I’m still frugal… It was everything I needed to grow as an artist and grow as like an independent human being.”

Gamez says that her experiences with the Tomato Alley studio prepared her to run the 1810 Gallery, but the initial challenges were daunting.

“It was ran way more legit as far as having contracts, a business license, all those things, it kind of really opened my eyes. I was like, ‘Damn, I should have really stuck to my business major,’” she said. “It’s always a constant work in progress.”

After leaving the Tomato Alley gallery in 2015, Burner was approached by Sacramento artist John Horton. Along with Gamez, they had the chance to operate the first and only gallery attached to the Warehouse Artist Lofts.

In 2016, Gamez and Burner started another new project. In a brick building on 7th and K streets at the site of the former Jade Apartments, Gamez and Burner—with fellow members of M5 Arts Collective—transformed the space into what they called Art Hotel.

Although it was only open for nine days in February 2016, the installation attracted more than 14,000 attendees and featured the work of nearly 100 artists.

“That’s when it really clicked. I was like, ‘Oh s–t, people really dig this stuff, you know?’” Gamez said. “It felt really empowering to know that people weren’t only listening, but they were like relating to the stuff that I was putting out.”

Gamez asked herself how her art, especially her murals, could impact the world. “Because it’s out in the public and it’s accessible, I’ve learned that, you know, art can be a social practice and it can be a way to communicate a great message,” she said.

One mural which she believes carries a strong message was made in collaboration with Burner in an alley off 24th Street. It depicts Elijah McClain, a 23-year-old Black man who was killed by police in Aurora, Colorado on Aug. 24, 2019.

In the mural, McClain has his eyes closed and is playing a violin—an instrument he taught himself—as a bright orange and yellow phoenix holds a broken chain in its beak. The bottom half shows a silhouetted figure holding an upside-down American flag with a quote from Khalil Gibran: “Darkness is dawn not yet born.”

“The phoenix rising from the ashes represents transformation and change, also breaking the chain of injustice,” Gamez said.

Impacting people with her art is a strong motivation for the work she is now pursuing. One of those people was her older brother, who surprised her at Art Street, the follow up to Art Hotel.

“He started crying, and my brother is not the type to cry,” Gamez remembers. “He made me cry, and I said, ‘Damn why are you crying?’ He said, ‘I’m just so proud of you. Like you’re really doing it, you know?’”