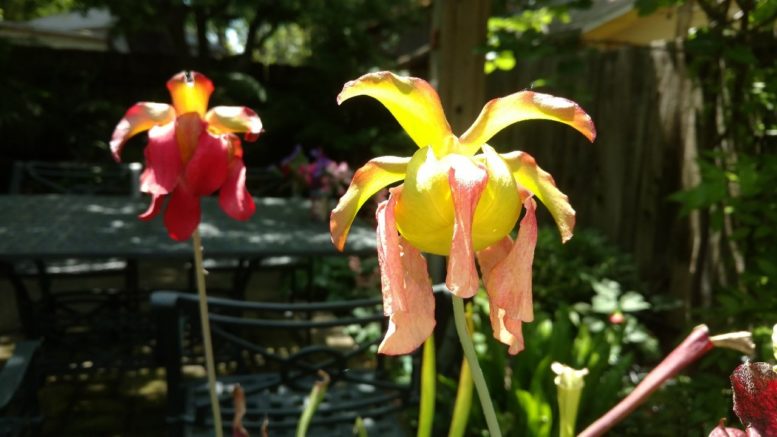 Flowers on pitcher plants growing in Midtown look like they're from another world. (Photo by Debbie Arrington)

Who doesn’t love a flower that gobbles up bugs? That’s part of the allure of carnivorous plants.

“Our stuff is a little bizarre, a little different,” said Eric Trygg, past president of the Sacramento Bromeliad and Carnivorous Plant Society. “People love the idea of bug-eating plants.”

This weekend, the club will present its 49th annual show and sale at Shepard Garden and Arts Center in McKinley Park. It marks the first time this popular event will be held on Father’s Day weekend.

The show “was always the last weekend in July – and hotter than hell,” Trygg said. “That’s wildfire season and the last couple of years, there was so much smoke in the air, people were told to stay inside. That’s also the last weekend of the State Fair, so we had that conflict, too.”

So the club made the move when the dates became available at Shepard Center, Sacramento’s hub of club activity. Plus, Trygg said, carnivorous plants make great gifts for dads.

Why do people gravitate towards these plants?

“They visualize violence or something out of ‘Little Shop of Horrors,’” said Trygg. (Remember Audrey, the man-eating houseplant?)

“There’s a mystique about these plants,” he added. “They’re beautiful; they’re weird. People think of Venus flytraps, but there are actually more than 650 varieties of carnivorous plants including some native to California.”

Carnivorous plants always have had a special mystique.

“When explorers and missionaries discovered these plants [often in exotic places], they came up with stories about plants eating babies or whole monkeys,” Trygg said.

But it’s curiosity that brings most newcomers to this plant show.

No fingers, but lots of mosquitoes, flies and more. The captured insects break down inside the plant, releasing nutrients. “They’ll eat anything they can catch,” Trygg said. “They’re pigs. You never have to feed them; they feed themselves.

“Look inside a pitcher plant and you’ll see all these bug carcasses and black goo [from decaying insects]. It’s kind of gross, but kids love it.”

And that fascination from younger generations strengthens the club, Trygg said.

“We’re one of the few garden clubs that attracts young people,” he said. “We have that advantage over begonias or African violets, for example. If your club doesn’t get new blood, it dies.”

Just like a pitcher plant in need of flies.

Find hundreds of unusual and rare exotic plants on display and for sale. Admission and parking are free.

Be the first to comment on "These plants feed themselves"