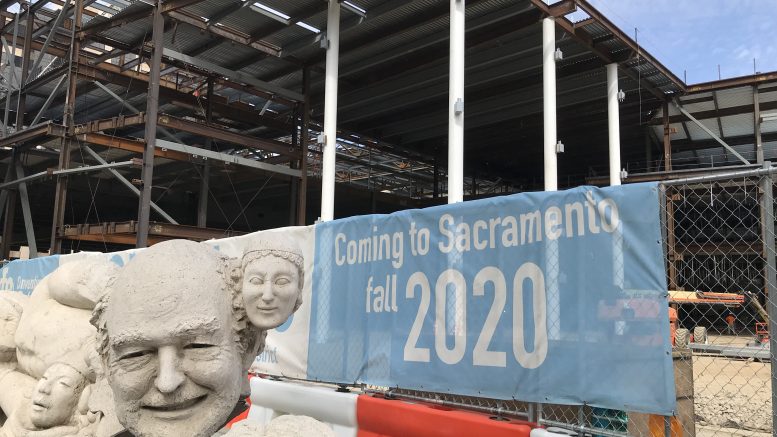 Construction is well underway on the Sacramento Convention Center expansion and Community Center Theater renovation. But the hotel taxes the city is counting on to pay for the project have fallen dramatically during the pandemic. (Photo by Foon Rhee)

Local businesses aren’t the only ones bringing in far less cash due to the COVID-19 recession.

So is city government, which may be forced to dip into its “rainy day” fund to make payments on time for Golden 1 Center and the Sacramento Convention Center.

The City Council must decide how to cover shortfalls to repay money it borrowed to build Golden 1, expand the convention center and refurbish the Community Center Theater. City Treasurer John Colville is making recommendations that council members considered Tuesday night, but also giving the pros and cons of other options so can get direction to come up with a final plan for approval.

In his report, Colville projects a $6.1 million shortfall for the Golden 1 bonds from March, when the pandemic started, to December because parking revenues from city garages, street meters and tickets plummeted as stay-at-home orders, the arena shutdown and business closings meant fewer people attending events or eating at restaurants.

Colville recommends that half the shortfall be covered by a $8.8 million reserve in the Golden 1 account, though that will use it all up 10 years sooner than planned. He says the other $3 million could come from the city’s $55 million “rainy day” account, the only available source in its general fund.

Another option is to dip into the general fund for the entire shortfall, which the city is required to do if no other sources are available, but that “rainy day” money may be needed to prevent service cuts.

The treasurer says the city could also restructure the bonds, but that would increase overall interest costs.

The city borrowed $273 million for Golden 1, while the Sacramento Kings financed the rest of the $556 million project, which also includes the practice facility.

UPDATE: Tuesday night, Councilman Steve Hansen urged the city to negotiate with the Kings to increase their lease payments to help cover the shortfall, pointing out that when the council approved the arena deal in 2014, it was told the general fund would be protected.

“I don’t think it’s fair for them to stiff on this,” Hansen said.

For the convention center and theater project, there’s an even larger shortfall of $10.1 million from March to December 2020 due to a collapse of hotel tax revenue from March through June, only 26% of the total from the same period last year. Several major downtown hotels closed temporarily as the convention and travel industry was devastated, Colville says.

The treasurer recommends trying to refinance the bonds that are due on June 1, 2021 and June 1, 2022. That would improve short-term cash flow until hotel tax revenues rebound, he says, but will increase the total interest costs.

UPDATE: Hansen called it a “difficult pill to swallow” for the city to owe $90 million more over 30 years to fix cash flow for two years.

Councilman Jeff Harris also said he doesn’t want to increase the city’s debt. “It’s sobering, but it’s real,” he said. “We’ve got a real problem on our hands.”

Colville told the council that it needs to act in October to proceed. If hotel taxes are reduced as much next year, he warned, the bonds will be “underwater” and the city will not be able to refinance.

The treasurer outlines three other options, but they all have drawbacks. For instance, dipping into the general fund would be fast, but only the “rainy day” account is available.

The city borrowed about $300 million for the convention center expansion and theater renovation, which are to be ready to host events early next year, plus the $16 million modernization of Memorial Auditorium, which reopened in May 2019. Debt payments were set to rise from $15.4 million in 2019-20 to $21.7 million in 2020-21.

The city has never defaulted on debt, and if it does, that will lead to higher borrowing costs on future projects, Colville warns.

But, he adds, “no one knows how long the COVID-19 pandemic will last” or the impact on city revenues.

Measure A will make equity a core value

Be the first to comment on "Bad timing on bonds"