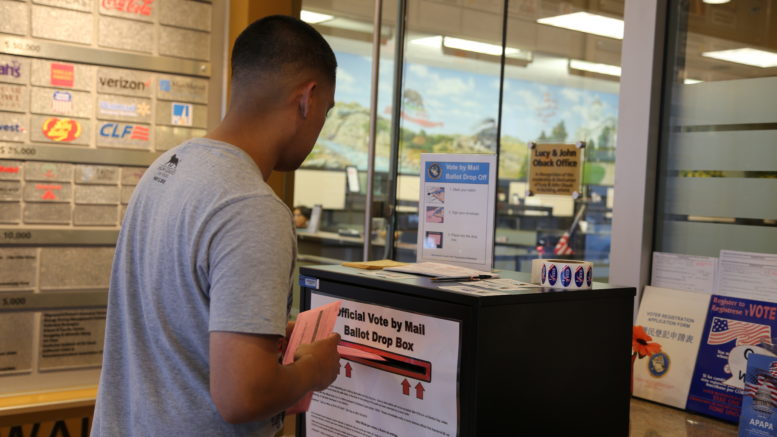 After March 3 primary, a long campaign before a long ballot on Nov. 3

With the dust finally settling from the March 3 primary, it’s not too early to point toward the Nov. 3 general election, which looks even more complicated and consequential.

There is the all-important presidential race, of course. But closer to home, voters will have no shortage of other important choices.

In California, there will be a batch of big statewide ballot measures.

Already qualified is a referendum financed by the bail industry to overturn the 2018 state law to end cash bail. Also eligible for the ballot are another attempt to allow stricter local rent control, an effort to pull back on prior sentencing reforms and even a bid to change Proposition 13—the politically untouchable property tax limit—with the so-called split roll to tax commercial property at market value.

Other statewide measures that supporters are trying to get before voters include ones on cannabis, consumer privacy, divorce, medical negligence suits, plastic waste, a ban on gas-only vehicles and a push by Uber and Lyft to exempt themselves from a new law protecting gig workers.

In Sacramento, voters will almost certainly decide on a half-cent countywide sales tax increase to fund road and transit projects for the next 30 years—a second try after a similar measure failed in 2016.

On March 3, Sacramento voters rejected Measure G, which would have reserved 2.5% of revenues—or about $12 million a year—for children’s and youth programs. Headed to the Nov. 3 ballot is an alternative proposal from Mayor Darrell Steinberg that would guarantee 20% of revenue growth, or $2.5 million to $3 million more a year.

There could still be a local rent control measure that would strengthen protections beyond a plan passed by the City Council. And a Sacramento group has filed notice that it plans to collect signatures for a measure to impose a 0.5% tax on a company’s revenues exceeding $50 million to fund mental health treatment for homeless individuals.

Besides ballot measures, there will also be lots of local candidates working the phones and knocking on doors before Nov. 3.

While votes are still being counted and the county elections office has until April 3 to complete the tally, it appears there’s a runoff in the District 8 City Council race between Mai Vang, a Sacramento City Unified School District trustee, and Les Simmons, a pastor and community activist. It appears more certain there’s a runoff in District 2 between incumbent Allen Warren and Sean Loloee, owner of Viva Supermarkets.

There’s also apparently a runoff for the District 3 seat on the Sacramento County Board of Supervisors, pitting Rich Desmond, a former Highway Patrol commander, against Gregg Fishman, a Sacramento Municipal Utility District board member.

There are several runoffs for local legislative seats after top-two primaries. And after a top-two congressional primary, incumbent Democrat Ami Bera will go up against Republican Buzz Patterson, a former White House military aide.

Also in November, Sacramento County’s smaller cities join the election fun. Two City Council seats are up in Citrus Heights, two in Folsom, two in Galt, two in Isleton, three in Rancho Cordova and two in Elk Grove, plus the mayor’s seat.

The campaign leading up to the March 3 primary—moved up from June to give California a bigger voice in the presidential contest—was like a sprint. The eight-month campaign toward Nov. 3 will be more like a marathon for candidates and voters alike.

Though it may be a slog, voters can’t complain they don’t have enough to decide in 2020.

Be the first to comment on "Editor’s note: The campaign slog"