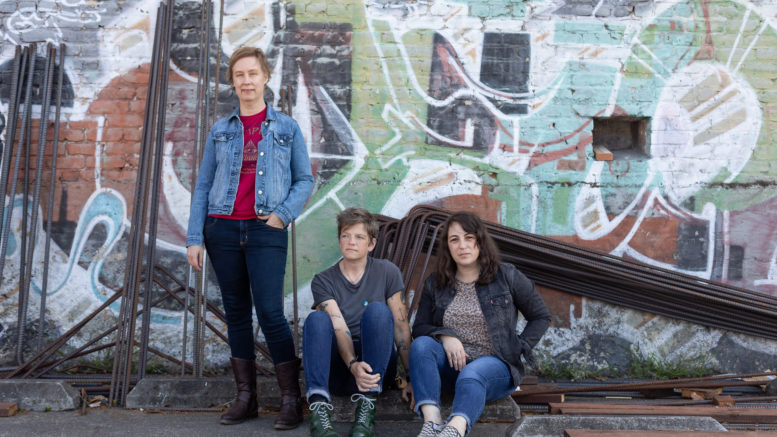 Sacramento musicians are still creating music, so here are new albums to vibe to

Shannon Betker took a song she wrote in the ’90s and revived it with band mates Jenny Klug and Stephanie Espinosa. Now, “Insight” with its busy bass lines and heart-thumping percussion is one of the most popular songs with fans and is featured on Clevers’ new self-titled album that Betker received last week from Europe. The pandemic slowed shipping, but it’s finally here.

“Each person brings their own vibe to the songs and makes it their own,” Betker told SN&R.

The nine-song record printed on black vinyl is available for purchase on Clevers’ Bandcamp and also at Phono Select Records starting this weekend. The band draws influences from the likes of Sonic Youth, Siouxsie and the Banshees and even a little Isaac Hayes, heard in the song “Wonderment,” which has beautiful reverb that dances along with Betker’s hypnotic vocals.

“I really want to start practicing again. I have written some songs since the stay-at-home order so I want to get together and practice to see what Stephanie and Jenny bring to the songs.”

“We decided to form because we love each other and Eric and I just wanted to play a ton of music,” Murray says. “It’s been great just playing music with your best friends all the time—at least before the pandemic.”

Themes of change and growth are heard throughout the album, especially in the song “Emotional Baggage Claim” with lyrics such as:

Murray’s honest songwriting and heartfelt vocals give Lousy Advice an open diary feel that reveals a woman just trying to figure out life with all its complications.

“I hope that any musician out there continues to just create, create, create,” she says. “We have so much time, people complain about never having the time to do things and now we have the time. I hope that people and artists and musicians are embracing that right now, and using it as a way to keep them moving.”

Nojay
Albums: Where the Pines Scrape the Sky and Bleach!
Jam: “Nojay Forever”

Experimental hip-hop artist Nojay will release two sibling albums on June 5: Where the Pines Scrape the Sky and Bleach! He says each has themes of coping with hardships, growing up and finding yourself.

“It became this really thought-out, cathartic piece of work that I finished back in January,” he says. “When quarantine kicked in, I had nothing to do. I was pretty ahead in all of my classes so I just started to make a bunch of music out of survival.”

Nojay says the album Bleach! is the opposite of When the Pines Scrape the Sky, but both are about him trying to find his place in this world.

“When the Pines Scrape the Sky, takes on a more positive, hopeful approach, and Bleach is what happens when you resort to bitterness and isolation,” he says.

Where the Pines Scrape the Sky will be available on all major streaming services such as iTunes, Tidal and Spotify, while Bleach! will be available for free on Bandcamp and SoundCloud. With musical influences across the board, including David Bowie, Kendrick Lamar and Frank Ocean, Nojay says he’s also inspired by the city he loves: Sacramento.

“Sacramento most of all, as a place and as a culture. The whole art and DIY scene inspires everything,” he says.

This trio is loud, fast and even wields a lap steel. Frack! released its full-length album Accelerant in January, recorded with Tim Green at Louder Studios in Grass Valley. Green has worked with Melvins, Karp, Sleater-Kinney and more.

The album takes the pulse of the world with all its injustices and wraps it up into a hard-hitting compilation of songs that encourage all to fight back.

“It’s good to be upset about injustice. Hopefully, Accelerant helps people release some of their anger and blow off some steam,” Frack! wrote to SN&R. “But in the end, it’s just punkish rock music. If it’s cathartic or gives someone some energy to power through this crappy time, then that’s awesome.”

Watch the music video for the song “Veils” here.

Sacramento musicians Patrick Hills, Lys Mayo and Bryan Bickel are Death Tapes, a hardcore/metal band that you need to listen to immediately. Mayo is on drums and vocals—and her menacing screams and shrills will give you goosebumps. The guitars are distorted, the drums fast and chaotic and everything just blends together.

Mayo says the song “Revive” was written in December about isolation, which is chilling given the state of the world with lyrics such as:

For fans of Sacramento hardcore, back in the golden days of the Orangevale VFW Hall shows, there’s even a tribute to the former local band Killing the Dream in the song “Grow.”

The Globs
Album: The Weird and Wonderful World of the Globs
Jam: “Hey Kid!”

The Globs are just a fun band all around. The music? It’s pop, it’s punk, it’s garage and its latest album The Weird and Wonderful World of the Globs has a little something for everybody. The album took three years to make, but I’m glad it finally released since we all need new punk rock in our lives.

The song “Hey Kid!” is an upbeat delight to throw on and sing along to when in need of a mood adjustment. It’s like happy medicine.

Be the first to comment on "Turn up the volume"