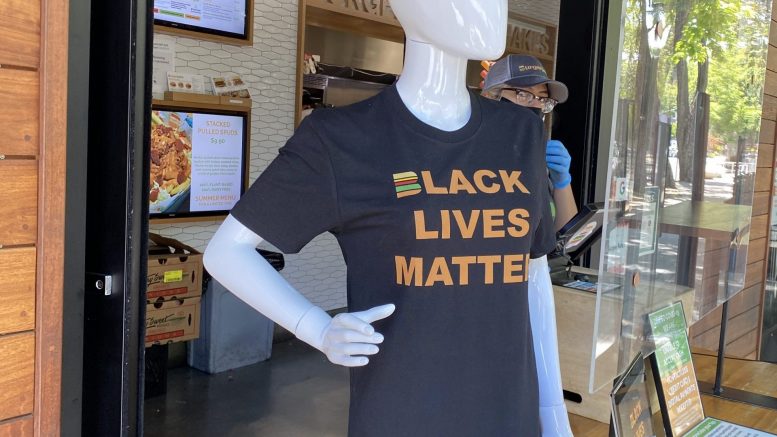 Burger Patch, the Sacramento vegan fast food restaurant, recently released a "Black Lives Matter" T-shirt with its signature "B." It's not sitting right with some activists. (Photo by Lindsay Oxford)

Burger Patch, Sacramento’s king of vegan fast food, has been a philanthropic force since opening last year. Its “Patch Match” program has donated a portion of its sales to a different Sacramento nonprofit each month.

In the wake of nationwide protests against police brutality, Burger Patch chose Sacramento Building Healthy Communities (The HUB), a nonprofit with ties to South Sacramento’s African-American community, as the June recipient.

Burger Patch also went a step further, raising money with an employee-designed “Black Lives Matter” T-shirt with its burger-styled “B” incorporated into the powerful rallying cry. The shirt sells for $15, with profits going to The HUB.

“We’ve seen too many organizations, particularly white-owned organizations, stand on the sidelines for too long,” said owner Phil Horn. “We felt like we had an opportunity to take a stance and show that it’s not just words, but that we’re going to put our word and our logo and our product and our brand behind this effort to make meaningful change that is long overdue.”

While the T-shirts have been well received on social media, some Black activists are not as impressed.

“I think it could have been delivered much differently … but I guess it’s a nice starting point,” said Adrianne Pennington, co-founder of TLC: The Liberation Collective and AYA: A Radical Black Healing Collective and past member of Black Lives Matter Sacramento.

“Allies are absolutely necessary in this fight, I recognize that,” she added. “I’m not for the Black Lives Matter with the Burger Patch logo … I don’t know how you take that seriously.”

Kim Williams, manager of The HUB, said she was unaware her group would be receiving proceeds from the T-shirts until she was presented with one. While she said she’s grateful for Burger Patch’s fund-raising, she may have had a “different conversation” had she been aware ahead of time.

“I think right now, when there’s such an awareness on what’s happening in our country along racial lines … there’s people who are coming now to the understanding of what African Americans have been dealing with,” Williams said. “And so we can look at that from not just social services and practices and policies, but also in business … how do you bridge those two together?”

Be the first to comment on "In bad taste?"