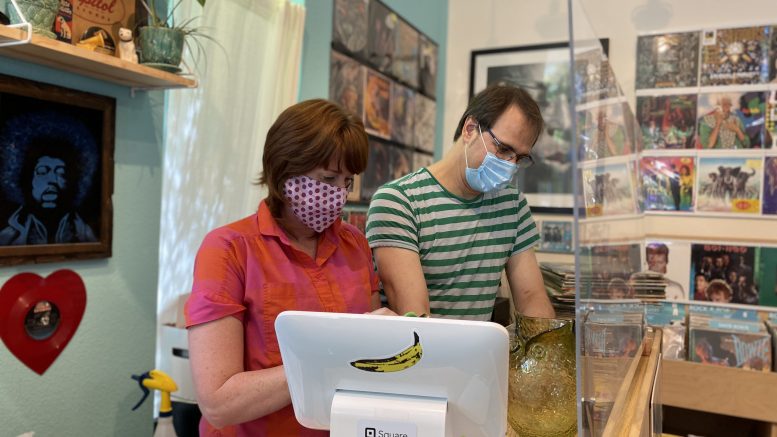 Laura and Tim Matranga are the owners of Kicksville Vinyl & Vintage, one of six record stores in Sacramento that reopened with uniform safety standards. (Photo by Lindsay Oxford)

Kicksville Vinyl & Vintage was open for just a week at its new location before public health regulations forced it to close temporarily during the COVID-19 pandemic.

“We had one great week and then we had to shut down,” said Laura Matranga, half of the store’s husband-and-wife team.

They’ve since reopened, one of six stores that chose to open at roughly the same time, May 28-30, with uniform safety standards—a nod to the reality that record shoppers tend to hit every store in town.

Delta Breeze, Kicksville, Medium Rare Records & Collectibles, Phono Select, Rocket Records and Waxidermy worked together to ensure that customers, employees and their families take as many precautions as possible to stay safe. For shop owners, this is their livelihood, and surviving the pandemic isn’t an option.

For Johnson, whose wife is a nurse, it’s personal. “She’s a front line worker, and I’m thinking basically she’s the one who has to deal with people’s indiscretions at the end of the day,” he said. “I can’t just pretend like this doesn’t exist … Behaving safe is relatively easy for our business … That’s part of why I feel it’s kind of inexcusable to not take precautions.”

All stores adopted a mask requirement, nearly a month before Gov. Gavin Newsom’s statewide order on June 18. Social distancing is now common practice by limiting the numbers of customers allowed inside, based on square footage. All stores require customers to use hand sanitizer when entering and supply gloves on request.

Ironically, one of the two stores unable to open on the designated weekend was the store that originally pushed for the coordinated opening. Medium Rare’s location at the Warehouse Artists’ Lofts and fears of vandalism during the George Floyd protests made opening on schedule a no-go.

“Every disadvantage possible was handed to me,” DeAnda said, laughing. “But it’s OK. I’ve never once had to fear bankruptcy or any weird thing like that.”

His concern: “I was taken away for … 60 days of talking about music to people every day.”

The other store was Waxidermy—“400 square feet, in all its glory,” jokes owner Jeff Hassett.

He stayed closed until June 12, due to concerns about how quickly businesses were being allowed to reopen, and removed the center bins from his store for proper social distancing.

“It was really cool to see all the people that came in the Friday I opened,” Hassett said. They said, “‘Hey, we just wanted to make sure you were gonna make it,’ and made an effort to spend money even though I hadn’t put new records out. That was cool.”

Every store has a common thread throughout their coronavirus stories: When they reopened, Sacramento’s record buyers showed their support—with masks and hand sanitizer.

Be the first to comment on "Record store solidarity"