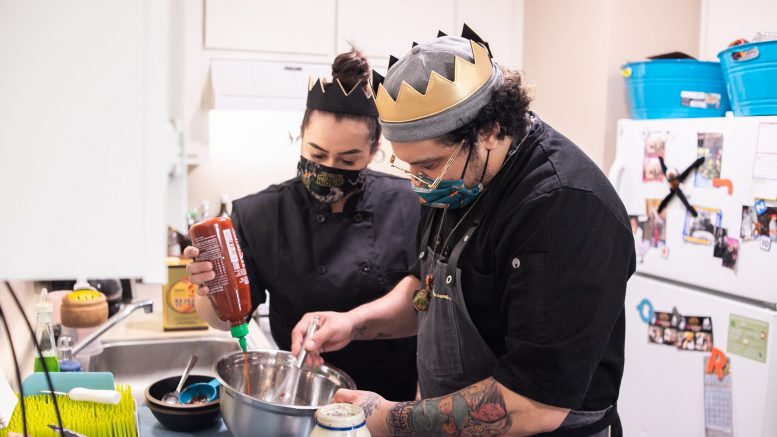 JD Snead (right) and his wife Amber mix ingredients for the sauce that goes into their Hawaiian poke bowl. Together, the couple operates the Michelin Minivan in Sacramento. (Photo by Nicole Fowler)

When he and his wife both lost their restaurant jobs as the coronavirus pandemic shut down businesses, JD Snead says he started cooking for his sanity.

Then, he says, “I realized that I could probably be selling these plates just by promoting them on Facebook and Instagram, and just being well-known in the restaurant and bar industry.”

So Snead started a new business model: He cooks his favorite dishes with his wife, Amber Snead, and delivers them door-to-door as the Michelin Minivan.

They are among the caterers and personal chefs who have switched to contactless delivery service, using the skills they’ve honed throughout their careers to continue their passion for cooking.

“I started making a week’s menu and I would drop it on Sunday night,” Snead says. “My specials I usually run on the weekends are my chicken adobo—it’s a Filipino dish marinated in soy sauce, sugar and vinegar, and it’s just reduced down to some deliciousness. And then, I also do a Korean barbecue on the weekends. I’ll make beef bulgogi and we make all of our own sides, like the banchan.”

Snead says he wants people to recognize him for his Filipino and Korean food, but with a name like the Michelin Minivan, he has the freedom to venture off to Italian, Hawaiian and even Mexican dishes, with plates ranging from $10 to $25, with a $3 delivery fee.

He’s been “cheffin,” as he calls it, since 2015, moving from bartending at Shady Lady to the back of the house at Kasbah to learn every aspect of the industry. His heart is always set on making comfort food, with the touch and taste that he grew up with.

“I know a lot of people don’t know about Filipino food, so I start out with the chicken adobo. You can’t go wrong when you hear soy sauce, sugar and vinegar over rice. That’s not so crazy,” Snead says. “Being a Filipino American myself, I grew up on the recipe and I’ve been perfecting it over the years. I can’t give you the recipe because I don’t keep track I just cook with feeling and tasting as I go.”

Using Facebook and Instagram, Snead says the Michelin Minivan preps and dishes out 300 to 400 orders a week. The couple also accepted donations during the George Floyd demonstrations and delivered hot food to medics and protestors at Cesar Chavez Plaza.

“There’s not a lot of things in life that you can get perfect. Cooking, you can get the closest to perfection as far as how you want it to taste, how it looks and then once you give the person the food, those eyebrows. You know, the ‘Mmm this is good’ eyebrows? It’s the eyebrow,” he says, laughing.

For Jeremy Katz, known in Sacramento as The Wandering Chef, his personal chef business switched from catering parties and private dinners to delivering door-to-door each week.

“What I’m delivering to you is a plate of food like you would be ordering in a restaurant,” Katz says. “I made a tuna and shrimp tempura tar-tar. I did a Lebanese-spiced meatloaf right in the beginning, and people really loved that because it’s pretty unique. I also did a miso-fried chicken, which people really responded well to.”

Katz makes two to three original dishes per week, sharing his rotating menu on Facebook and Instagram. But many customers order familiar dishes and comfort food during these uncertain times.

“The truth is, it really feels like people are looking for comfort food, or food that they can identify with,” Katz says. “With the way things have been, people want ease, they want quick, and I think because there was so much ambiguity and concern about what restaurants were doing it the right way, people are more inclined to take the person that isn’t operating in a restaurant setting with 10 other people working around them. It seems like a safer way to go.”

Before the pandemic, Juan Alvarez’s catering company served the masses, but he, too, had to adapt to people dining in. He created a weekly delivery service that offers sandwiches, tacos and full-on Cajun shrimp boils with head-on shrimp, red potatoes, corn on the cob and andouille sausage sold by the pound.

“We stayed busy for almost three months now,” Alvarez says. “Although I’m pretty old-school when it comes to customer service, I always advocate for the personal side of interacting with someone directly as opposed to going through a third person. I think a lot of people still feel that way.”

With food delivery giants such as DoorDash and GrubHub taking their cut from local businesses, these Sacramento chefs aim to keep costs affordable while offering restaurant-quality dishes from chef to table.

“I think feeding someone a meal, it speaks from the heart of the person who’s preparing it,” Alvarez says. “It tells you a lot about the person—where they’re from, where they’ve been, their emotions. Cooking is a bonding experience for a lot of people. We become cooks to nurture people and nurture ourselves. It’s an act of love, preparing a meal for someone.”

For a listing of Sacramento-area restaurants, go to sacramento.newsreview.com/local-dining.

Be the first to comment on "From chef to table"