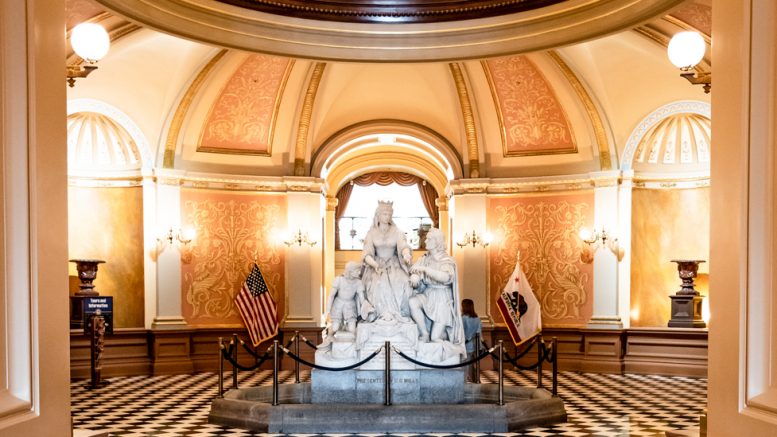 Legislative leaders announced June 16 that a statue of Christopher Columbus and Queen Isabella of Spain will be removed from the state Capitol. (Photo by Matt Fraser)

Essay: The statues of John Sutter and Christopher Columbus glorified white supremacy and needed to be removed. There are other places that should be recognized instead.

Preservation Sacramento, as a citywide historic preservation advocacy nonprofit, supports the position taken by the National Trust for Historic Preservation on Confederate and other monuments whose main purpose was the glorification of white supremacy.

While California has few Confederate monuments, statues of figures like John Sutter and Christopher Columbus taught the same lesson—that American history belongs to white men. These monuments reinforce past trauma, a constant reminder to Black, indigenous and other people of color that they were subjugated under white rule.

The statue of John Sutter that was removed from Midtown was installed in 1987, too recently to qualify as a historic artifact. Donated by the United Swiss Lodge of California, it was located on Sutter Hospital property across the street from Sutter’s Fort. It was not funded or supported by the city or state, but visitors undoubtedly associated the statue with the fort.

The Sutter statue’s lesson was similar to Confederate monuments that perpetuated a counterfactual “Lost Cause” myth of the antebellum South and its poisonous stereotypes about slavery. The pastoral image of Sutter as agricultural patriarch and a kind father figure to the Maidu and Miwok people he terrorized and enslaved was just as false, concealing the facts with a noble smile.

The statue of Christopher Columbus and Queen Isabella in the state Capitol rotunda is a historic artifact, only a decade or so younger than the Capitol itself. However, its purpose was the same—a reminder of European dominance over the New World, with California representing the final phase of conquest via manifest destiny.

Removing these statues, historic or not, is a step toward the greater good of ensuring racial justice and equality. Some may be relocated to recognize their history and place them in proper context.

Their removal is not an erasure of history; it is the first step toward reversing a greater cultural erasure and the emergence of a more inclusive history of Sacramento. That legacy must include the people and places associated with those who, until recently, were seldom memorialized in bronze or marble or listed as landmarks.

“Removing these statues, historic or not, is a step toward the greater good of ensuring racial justice and equality.”

The city of Sacramento already pursues that goal by identifying and preserving historic sites associated with communities of color, including places such as Shiloh Baptist and Kyles Temple AME Zion Church in Oak Park. The city is also considering nominations for properties associated with civil rights attorney Nathaniel Colley. Last week, we asked the city to add the Alder Grove housing projects on Broadway (already listed as the New Helvetia Historic District in the National Register of Historic Places) to the Sacramento Register of Historic and Cultural Resources.

Many other places deserve recognition and should become historic landmarks: the Royal Chicano Air Force murals, mid-century Modern buildings designed by local Japanese-American and Chinese-American architects and sites associated with civil rights leaders and LGBTQ activists. These places, and the people associated with them, can inspire and engage the public with a more inclusive history.

Similarly, Sutter’s Fort—and the California State Indian Museum that shares a park with the fort—can tell a more inclusive story of Sacramento’s early history and the indigenous people who lived here millennia before Sutter arrived.

Plans to build a much larger California Indian Heritage Center in West Sacramento are long deferred, possibly even longer due to COVD-related state budget cuts, but we can use the museums we have to tell that greater story now. We owe it to our descendants to share our legacy in a manner that is thorough, honest and inclusive to all.