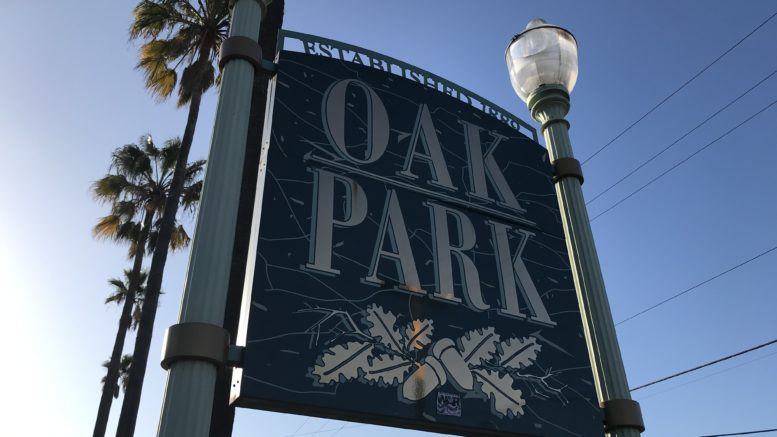 All across this historically African-American neighborhood, investors are moving in, redeveloping entire blocks into new businesses and condominiums. Broadway is now home to KC Kombucha, where a husband and wife produce drinks of the same name, and Vibe Health Bar, where cold-pressed drinks and acai bowls dot the menu.

Oak Park’s cost of living and demographic profile is changing as well. Skyrocketing prices have forced out some residents, provoking a conversation about what this neighborhood used to be—and whether that should change.

The history of Oak Park is not as bright as the long, drooping ornaments that now light the businesses on Broadway Boulevard.

The formation of neighborhood dates to 1887, when real estate developer Edwin Alsip set aside 56 lots that would eventually become Sacramento’s first suburb. Oak Park consisted primarily of blue-collar workers, most of them white, but it was also home to black and Mexican-American families. By the end of World War II, however, many of their jobs faded away.

The postwar downturn, in combination with other factors, led to the demographic shift that allowed Oak Park to develop a largely African-American identity. The destruction of Sacramento’s West End neighborhood pushed many displaced black residents into the neighborhood, as they were not blocked out by racially restrictive covenants. Economic growth came with this new population, who took over businesses abandoned by white flight.

But just as the neighborhood was beginning to establish itself anew, the construction of Highway 50 and Highway 99 cut it off from the rest of Sacramento. This eventually led to an increase in poverty and a subsequent rise in crime, which further alienated the community.

Yet, even during this time, Oak Park’s historic cultural roots flourished. The Guild Theater, with its distinct Moorish Revival architecture, was a premier destination for decades, hosting vaudeville shows, musical acts and other events. The Belmonte Gallery, an avant-garde coffee shop and art gallery, became a center of leftist causes, just as political activism became a critical component in Oak Park.

The Sacramento chapter of the Black Panther Party was based out of the neighborhood from 1968 to 1971. The city’s first African-American interest newspaper, The Sacramento Observer, was founded in Oak Park in 1962. Some organizations, such as the Women’s Civic Improvement Club, remain operational to this day, providing a variety of social services to local residents.

Churches were also integral to the community. Among the oldest still standing are the St. Paul Missionary Baptist Church and the Shiloh Baptist Church, where contemporary African-American intellectual icon Cornel West once listened to the impassioned sermons of the Rev. Willie P. Cook.

Oak Park’s demographic change over the past few decades is often thought of as a natural consequence of development-driven gentrification, as more affluent, mostly white residents moved to the area. While this explanation rings true, the neighborhood has also been altered by other ethnic groups.

Hispanics, for example, now account for 42.5% of Oak Park’s population. There’s also a large presence of Pacific Islanders and the neighborhood’s Hmong community is rapidly growing as well.

“There is a diversity of people moving here, more than people may think.”

“Yes, gentrification is happening,” Ware acknowledged. “But there are also minorities who are a part of that gentrification. There is a diversity of people moving here, more than people may think.”

Still, the struggle to stay is never far.

In South Oak Park, UC Davis’ Aggie Square development has raised the latest shadow. Proponents of the 25-acre planned research and tech satellite campus claim that it will bring jobs and innovation. Skeptics say that it will also lead to increased housing prices and further dislocation for poorer residents as students and faculty move in. To old-timers, it’s a constant reminder that development comes with consequences.

“The entirety of this place is changing, it’s being transformed, even as we speak,” Ware said. “It’s changing all the time.”

Such is life in Oak Park.