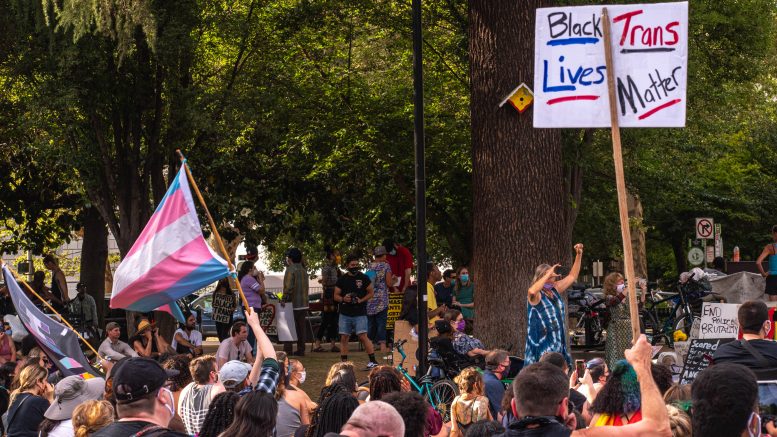 Dozens gathered for the Rise for Trans Lives rally at Cesar Chavez Plaza on June 11. (Photo courtesy of Nancy Chan)

Essay: During this year’s Pride month, the Sacramento LGBT Community Center is in full support of “Black Lives Matter.”

Each June, the Sacramento LGBT Community Center hosts our largest community engagement event of the year, Sacramento Pride. During Pride month, we must remember that Pride started as a riot.

Fifty-one years ago, a crowd led by Black and Brown trans women fought back against the police harassment and persecution to which the LGBTQ community was commonly subjected. Six nights of rioting followed and sparked a civil rights movement to replace public shame and criminalization with collective pride.

Today, SacPride is making an effort to continue to center and amplify the voices of our Black LGBTQ community in support of the “Black Lives Matter” movement throughout our week-long virtual celebration. Most of our segments have been created or led by our Black community, and I’m excited to see continued engagement online.

The weeklong broadcasts will air from Sunday, June 21 to June 28 and will be available to watch at sacramentopride.org and on our social media channels as well (@SacPride and @SacLGBTcenter). We have multiple broadcasts lined up, including showing folks how to celebrate and activate Pride from home, celebrating our LGBTQ graduates, a live trivia night, DJ battle and much more.

Pride is a celebration that helps commemorate the progress that we have made thus far; however we have a lot more work to do.

Earlier this week, the U.S. Supreme Court stood for the rights of LGBTQ+ people, affirming that we have the right to be protected from employment discrimination under federal law. Although this is a significant shift towards permanent acceptance of LGBTQ+ rights in America, we know that discrimination and harassment continue.

Black LGBTQ people, especially transgender people, still face deadly intolerance and discrimination at the intersection of their identities, reminding us that none of us are free until all of us are treated equally under the law and by society. Just last week, two more Black transgender women, Riah Milton and Dominique “Rem’mie” Fells, were killed, as was Rayshard Brooks, another unarmed Black man killed by the police this weekend in Atlanta.

There are far too many intentional gaps in federal law that allow for discrimination in federally funded programs at hospitals, colleges, adoption agencies and public accommodations including hotels and restaurants.

The Supreme Court’s decision stands in stark contrast to the Trump administration’s actions. Last week, the Department of Health and Human Services instituted a rule that seeks to roll back anti-discrimination protections in the Affordable Care Act for LGBTQ people—in the midst of a public health crisis.

The next step is for Congress to use the Supreme Court’s decision to align with the overwhelming majority of Americans and pass the Equality Act to ensure full federal non-discrimination protections for all LGBTQ people.

“Black LGBTQ people, especially transgender people, still face deadly intolerance and discrimination at the intersection of their identities, reminding us that none of us are free until all of us are treated equally under the law and by society.”

At the Sacramento LGBT Community Center, we are working to create a community where LGBTQ people are not only safe and welcome, but able to thrive. We support the health and wellness of the most marginalized who have been mistreated by society. We advocate for equity and justice in public policy and society. And we work to build a culturally rich LGBTQ community where everyone has a sense of belonging and value.

We must call for everyone in the LGBTQ community and our allies to act together and fight for an end to systemic oppression and inequity that has a devastating impact on the most marginalized in our community. Visit sacramentopride.org/take-action-now to learn more about actions you can take to create change for a more just and equitable society.

Be the first to comment on "Just getting started"