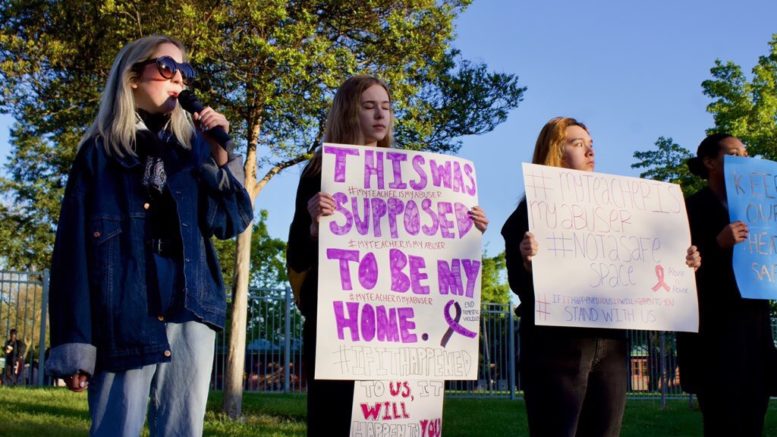 Dozens of Laguna Creek High School students protested the return of drama club instructor Sarah Goodenough last year. Goodenough is now claiming she was bullied out of her job.

A discredited drama teacher is flipping the script on why she left her job last year by claiming she was bullied by the students who say she bullied them.

Sarah Goodenough filed a civil claim against the Elk Grove Unified School District on March 18. Goodenough was Laguna Creek High School’s theater instructor from 2016 until May 1, 2019, when she resigned amid student allegations that she was emotionally manipulative, verbally abusive and, in at least one instance, physically assaulted a student who babysat for her.

Goodenough briefly became the subject of the #MyTeacherIsMyAbuser hashtag on Twitter and campus protests when the district announced she would return to duty following an investigation into allegations made by students and parents.

But in a claim filed with Sacramento Superior Court, Goodenough and her attorney William A. Munoz are attempting to rewrite the narrative that she was a temperamental authoritarian whom the district didn’t do enough to rein in.

“The only thing she did wrong was she’s gay,” Munoz told SN&R. “When she came out as a lesbian, all her relationships changed dramatically.”

Munoz says his client came out at the beginning of the 2018 school year and that the situation only came to a head with her students when Goodenough discovered that they were trying to recast the fall production of A Midsummer Night’s Dream that she was directing and decided to cancel the show.

“There was no issue before that,” he said.

But several members of the drama club, some of whom identify as LGBTQ, said there were many, many issues before that, including Goodenough plumbing her students for personal information that she then used against them, leaving them in the company of adults who hadn’t been fingerprinted and exploding at them during the October 2018 performance of Midsummer, leaving sobbing children behind the curtain.

“They had been shamed and pushed down and silenced,” parent Amy Pogue told SN&R last year. “I mean some of the things she said to these children. She told one of these students she was too fat to act.”

Munoz, again, claimed the opposite.

“These kids are bullies,” he said. “She felt threatened by these students.”

The one thing that Goodenough and the students do agree on is that the district failed to investigate the allegations in a meaningful way. Both sides say they weren’t interviewed during the months-long investigation and that the cursory process that stripped Goodenough of her adviser role while reinstating her made no one happy.

After she left Laguna Creek High, Goodenough filed an employment discrimination claim that the district rejected because it was “untimely,” according to her court petition. Munoz, who is representing three other teachers with lawsuits against the district, said they’re petitioning the court for relief from that technicality so that the claim can move forward.

The petition filed in court states that Goodenough’s claims against the district “rise from continuous harassment, discrimination, and retaliation that occurred from August 2016 through May 2, 2019 while Petitioner was employed at Laguna Creek High School” and caused her a slew of damages, “including humiliation, anxiety, damage to her reputation, and stress suffered as a result of EGUSD’s wrongful conduct.”

Elk Grove Unified spokeswoman Xanthi Pinkerton confirmed the claim, but said it was the district’s policy not to comment on pending litigation.

Munoz said his client has been unable to find another teaching job since she left Laguna Creek, with one job offer rescinded the day before she was supposed to start. He said SN&R’s coverage might have had something to do with that. According to the California Commission on Teacher Credentialing, Goodenough has a valid license to teach under her former married name “Woodward” until June 1.

While the legal petition names Elk Grove Unified as the respondent, Munoz said he and Goodenough haven’t ruled out going after “the students who defamed her.”

Jacqueline Laybourn, a Laguna Creek High graduate who became one of Goodenough’s targets, according to students and parents, said in an email that she was “not at all shocked by any of this.”

Season of the Wiz

Be the first to comment on "Theater of the absurd (lawsuit)"