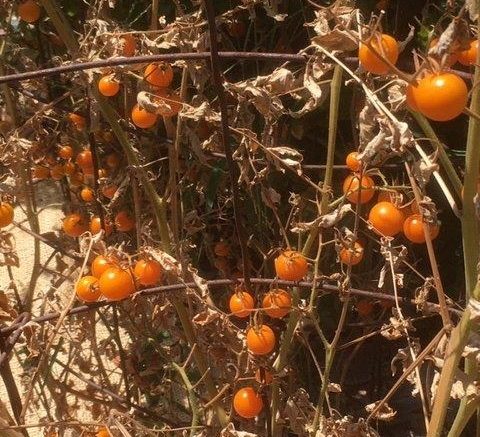 Record heat and falling ash—what’s a pandemic gardener to do?

Many Sacramentans got seriously into food gardening while staying home during COVID-19 restrictions. Then, weather and wildfires brought their expected harvests to an abrupt halt.

Foolproof tomato varieties suddenly died with fruit still clinging to the vines. Zucchini—usually so prolific it’s the butt of countless jokes—aborted its baby squash. Gritty white flakes clung to leaves and vegetables yet to be picked.

It’s the sort of experience that makes backyard farmers want to throw in the trowel.

First, don’t panic. Our summer weather has not been normal. Following a very hot July, Sacramento hit an all-time August high of 112 degrees. When it gets that hot, plants shut down and go into survival mode.

Local gardeners noticed that Sungold cherry tomatoes, in particular, were dying mid-summer even before the August heat hit. Considered among the sweetest homegrown tomatoes available, this popular variety often produces loads of little yellow tomatoes week after week, all the way into November.

Instead, vines died while the ripening tomatoes still clung to the plants.

It’s enough to make backyard farmers throw in the trowel, but they shouldn’t panic.

Placer County master gardener Pauline Sakai first brought this situation to our attention. After a call to readers to share their experiences, we quickly discovered Pauline’s dead Sungold was not alone. We received more than 50 replies. And Sungolds weren’t the only variety having issues.

“Wow! I was so relieved to hear I’m not the only one in Sac with terrible tomato luck this summer.,” wrote reader Enid Pritikin. “BOTH our Sungolds and our Early Girls were total flops.”

Sungold sudden death syndrome puzzled experts; was it a new disease or some kind of fungal wilt?

Closer inspection of the dead plants revealed they died of heat stress—and that was before August’s record-setting streak.

As temperatures continued to climb, tomato production stopped altogether. Tomatoes won’t set fruit when afternoon highs are above 95 degrees. Their pollen dries up and flowers drop off.

In this weather, zucchini develop little baby squash that start out OK, but never seem to develop. They rot before reaching 4 or 5 inches long due to insufficient pollination.

The wildfires made conditions even worse. While skies are smoky, bees return to the safety of their hives. They’re not out, working the squash blossoms, as they normally do on a summer’s day.

Extreme heat further complicates bees’ lives. If temperatures top 100 degrees (as it has many days this month), worker bees need to bring a quart to a gallon of water back to their hives. They’re too busy to pollinate.

So, female zucchini blossoms—which start forming baby squash before the bees arrive—never get the attention they need. Without proper pollination, the squash rot before they mature.

Yet, amid all this smoke, most plants will be just fine. They deal with smoke better than we do. As they process carbon dioxide, they also help filter out smoke, cleaning the air.

The most vulnerable crops to smoke: Grapes and tomatoes. Both can absorb smoke into their skins, causing “smoke taint” to their flavor. (Winemakers say it’s like licking a wet ashtray.)

As for falling ash, it can actually be beneficial to plants—if it’s mostly from grasslands, and not charred buildings and cars. Just make sure to wash your backyard produce really well.

Be the first to comment on "Summer garden woes"