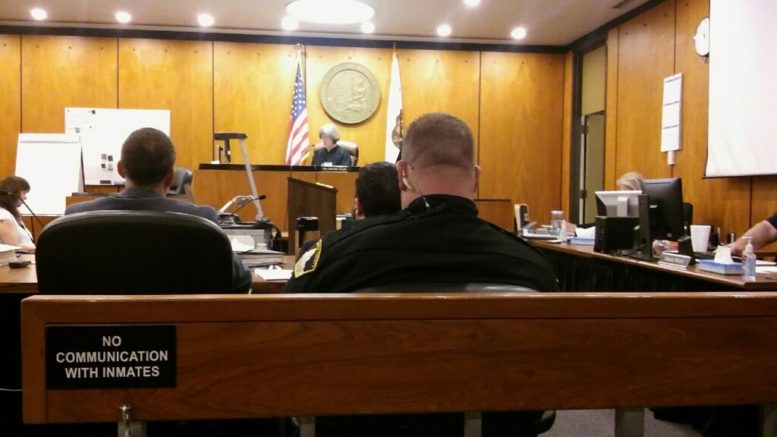 Thirty years after the Supreme Court allowed child victims to testify through live video, Sacramento still makes them face the ones who allegedly hurt them

Randall O’Neal Slaton told the 5-year-old girl to stay quiet or else he would hurt her even more. When she spoke up two years later, the girl learned she wasn’t the only underage victim related to her rapist.

Jose Placencia Iniguez was convicted of sexually abusing five girls, all family members, ranging in age from 6 to 14.

And Vladimir Sinigur told a relative and the police about his three child victims—before pleading his innocence in Sacramento Superior Court.

They’re among the ugliest crimes imaginable, perpetrated against the most trusting of victims. In Sacramento County, the only way these children get justice is if they summon the courage to face their abusers in court.

“In almost every sexual assault case, the victim has to testify for us to prove our case,” explained Chris Ore, the supervising deputy district attorney who oversees his office’s Special Assault and Child Abuse Unit. “Getting that child to actually talk in court is one of the most stressful jobs in the world.”

Sacramento’s criminal justice system can make it a little easier for the children on whom so much relies.

A different way, but not in Sacramento

In 1990, the U.S. Supreme Court narrowly decided that allowing a child to testify outside the courtroom via a live video feed struck the right balance between protecting the rights of the defendant and the soul of the witness. In the decades since, California and other states have increasingly turned to closed-circuit television testimony as a way to buffer children from the people they’re being asked to implicate.

It works like this: The jury and the defendant stay in the courtroom with the CCTV monitor. The judge, prosecutor, defense counsel and child witness convene in a different room. The child has to face the camera so that the defendant and jury can see and hear the testimony, and defendants must be able to communicate with their attorneys at all times.

“In the context of a criminal child abuse prosecution, CCTV can be used as an accommodation for a child witness who would otherwise be traumatized by testifying in front of his or her alleged sexual abuser,” the National District Attorneys Association noted in 2012.

The Judicial Council of California outlines other alternatives to a child testifying inside a courtroom. Possibilities include having attorneys submit questions for a child development expert to ask, or even closing the courtroom and hearing testimony in the judge’s chambers.

“On deciding to take the testimony of a child, the judicial officer should balance the necessity of taking the child’s testimony in the courtroom with parents and attorneys present with the need to create an environment in which the child can be open and honest,” states the California Rules of Court guidelines.

In September 2016, Gov. Jerry Brown signed a bill adding human trafficking to a list of crimes that permit remote video testimony by minors, a list that already included violent and sexual offenses as well as other serious felonies. Assembly Bill 1276 also raised the eligible age of child witnesses by video from 13 to 15. When it took effect the following year, AB 1276 joined similar laws in at least eight other states, according to the office of Assemblyman Miguel Santiago, a Los Angeles Democrat and the bill’s author.

The ACLU opposed the bill, arguing that it “strayed too far from the circumstances” that the Supreme Court established for the use of live video testimony, and was likely to lead to violations of a defendant’s constitutional right to confront witnesses.

At the time AB 1276 was signed, both Alameda County’s district attorney and Los Angeles County’s sheriff applauded expanding the criteria and noted that it reflected decades of evolving legal opinion.

“In recent decades, federal and state courts and lawmakers have recognized the importance in reducing the trauma experienced by minors who are victims of various crimes, leading courts to reject constitutional challenges in the use of live video testimony,” then-L.A. Sheriff Jim McDonnell said in a statement.

So why isn’t this practice used in Sacramento County?

A Sacramento Superior Court spokeswoman said that it’s considered a “conditional examination” if a child testifies remotely in a sexual assault trial because the testimony isn’t played in real time for the defendant or jury, which would basically make it inadmissible.

And Ore said that it hasn’t been necessary in recent history, and that it’s more convincing to put children on the stand. “The jury wants to hear from the victim,” he said.

He also contended that survivors can find the experience of testifying “a little empowering,” because it helps them recapture the power their attacker tried to take away.

“I got to say what happened and the person that did it didn’t get to say anything,” Ore described. “They just had to listen.”

But getting children into the witness box remains challenging.

Ore supervises a team of six full-time prosecutors, each juggling as many as 18 cases, plus a victim’s advocate and a support dog named Reggie. Even with child sexual abuse a vastly under-reported crime, Ore’s unit is buried in work. The Sacramento County Sheriff’s Office fielded more than 600 child sexual abuse allegations last year, Ore said.

Ore says his team spends a lot of time emotionally preparing the underage witnesses—explaining the courtroom’s physical layout, its almond walls and corkboard ceiling, the judge’s raised bench and the cramped gallery, the narrow aisle that cuts a path to the witness box, where they will sit, possibly for hours, watched by 12 silent strangers and one familiar defendant.

Children as young as 4 do this in Sacramento County. They often don’t know enough to be afraid, Ore said. “Half the time, they don’t know the wrongness of it.”

It’s the older children, the ones in middle and high school, who require the most convincing, Ore says. He says it’s not uncommon for survivors to come forward in adulthood, years and sometimes decades after the abuse occurred.

But not every child victim can testify. And the reasons are undeniably grim.

In January, Kendra Nichole Czekaj was fatally struck by a car after leaving the Children’s Receiving Home of Sacramento, where she had been placed about three weeks earlier. The 12-year-old was supposed to take the stand against her father, Carewin Vinuya Czekaj, who faced a dozen felony counts of sexually abusing her over three years.

Because Kendra died, prosecutors were forced to drop most of the charges.

While Czekaj admitted some crimes to police that DNA evidence was able to corroborate, a confession alone would not have been enough to convict him of all counts, Ore said.

That’s because a centuries-old legal concept called corpus delicti—Latin for “body of the crime”—states that evidence is necessary to prove that a crime occurred and that the confessor is the one responsible. In a murder case, that requires a corpse. In a child sexual assault case, Ore explained, “Usually that proof comes from the testimony of the victim.”

A month after his daughter’s death, Czekaj, 35, pleaded no contest to three felony counts of lewd and lascivious conduct involving a minor. His sentencing is scheduled for June.

The California Department of Social Services is investigating the circumstances surrounding Kendra’s departure from the Receiving Home, and her mother is considering a civil lawsuit against the home, which an SN&R investigation found is responsible for more than half of all missing persons reports in the city of Sacramento.

Meanwhile, new victims are being made every day.

The ones we know about

Since the beginning of March, authorities in Sacramento County have arrested five men for allegedly committing or soliciting sexual acts with minors, according to an SN&R review of booking logs. Two are no longer in custody, jail records show.

Because nine out of 10 child molesters are either family members or close acquaintances, Ore said parents should pay attention to who their children spend time with, and should speak to their kids if they observe troubling changes in hygiene, weight, mood or behavior.

The DA’s office has announced four successful prosecutions of child rapists this year so far. In each case, the defendant pleaded not guilty, resulting in a jury trial at which the young victims presumably testified.

Michael Alan Khatoonian sexually assaulted a 10-year-old girl while her mother was in the bathroom of his home, and then again while the mother sat on the other side of the couch. Khatoonian, a convicted arsonist, fled the state during his trial and was tracked down in Michigan.

Authorities found Iniguez hiding in Mexico and extradited him to the United States, where a Sacramento jury found the 42-year-old guilty of 14 felony counts in December.

In January, a jury convicted Sinigur of 18 counts of felony child sex abuse. Like Iniguez, the 31-year-old Rancho Cordova man now resides in San Quentin State Prison, and won’t be eligible for parole until the 23rd century.

When Sacramento police arrested Slaton last July, they discovered he had been molesting another female relative, this one just 10 years old. Last month, a jury convicted Slaton, now 43, of seven felony counts of child sexual abuse, including two of sodomy. He faces a maximum sentence of 125 years to life in prison.

His sentencing hearing was postponed to May 4 because the coronavirus outbreak forced the court to suspend operations.

Essay: We can prevent child abuse

Be the first to comment on "When children take the stand"