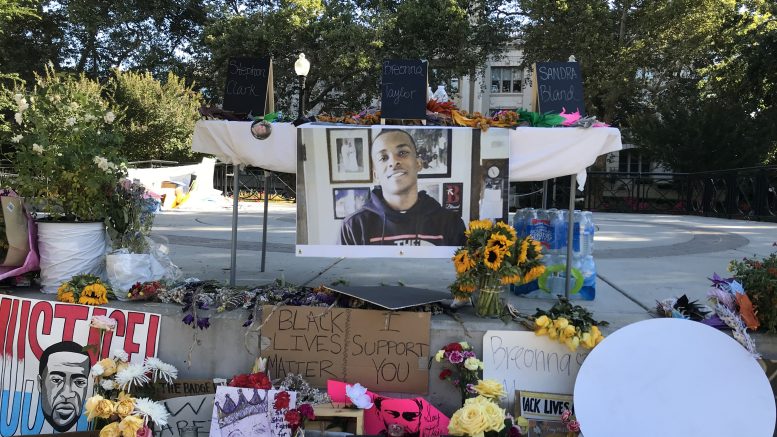 Cesar Chavez Plaza is a center for protests for police reform. (Photo by Foon Rhee)

Re: “The right response to George Floyd” by Katie Valenzuela (Essay, June 4):

I fully support the councilmember-elect’s call to reduce the police budget and invest the money instead into social services, mental health crisis intervention, etc. Good on her for being brave enough to shift the policy conversation in this direction, in the face of what I’m sure will be significant push-back from the police union.

I hope my own council member (Eric Guerra) will support this as well. It will not only address many of the legitimate grievances giving rise to the protests. It’s simply the smart and right thing to do.

Yes! We need fewer, better trained police (those who won’t feel it is justified to kneel on a person handcuffed behind their backs and kill over $20) and more social workers and housing to help the homeless. Katie Valenzuela’s changes must be implemented.

Defunding law enforcement departments is ludicrous. Reform is more like it, in my humble opinion.

You can’t reform rich people by continuing to give them their riches…When you take away the money that allows them the resources to “act,” you can then rebuild the person showing them how to become more tactful and resourceful with less. Defunding is necessary. Reform is impossible without defunding. Both must happen.

Wouldn’t it be nice if white people actually meant it when they said they respected and trusted Black people, and tried to understand what they were talking about instead of making assumptions and discounting their work and needs? Maybe we could educate ourselves instead of continuing to be insulting and judgmental. If you want to be an ally, that’s a good first step.

Re: “What police reform could look like” by Foon Rhee (Editor’s note, June 3):

The first thing for police reform is to hire a Black police chief. Also important is to vote for city council persons who are Black.

Focus on police is misguided

Dismantling the social contract has been a bipartisan, multi-generational project. Blaming the police for the fallout of that project is like blaming the chicken pox on the sores. They’re just the symptom. It’s like trying to steer your car with the rear view mirror: both futile and dangerous.

Send a letter to the editor (150 words maximum) at sacramento.newsreview.com/letter-to-the-editor