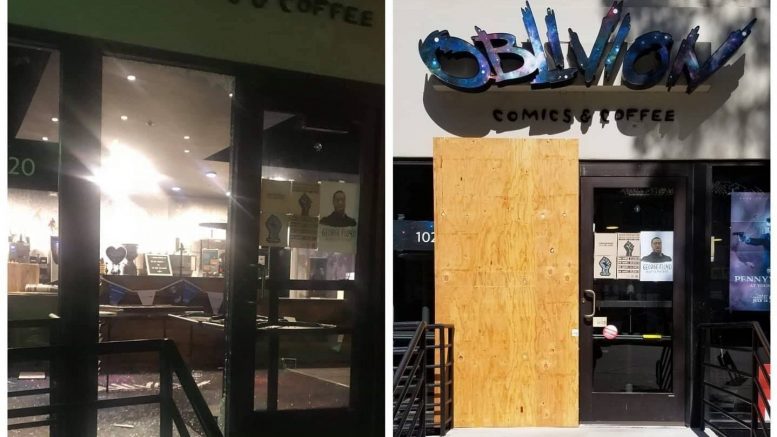 Oblivion Comics and Coffee was one of several Sacramento businesses that were vandalized during the George Floyd protests. (Photo courtesy of Oblivion Comics & Coffee)

“How can we sell comics with words like ‘Justice’ or ‘Freedom’ on the covers if we ourselves remain silent and unwilling to speak out against injustice and systemic racism? … We support #blacklivesmatter and stand in solidarity with the protestors around the world who are demanding justice and change to a system that continuously allows the murder of innocent Black people. Without justice and without change, there can be no peace.”

This post appeared on Oblivion Comics & Coffee’s Facebook page on May 31. That night, as crowds filled downtown to protest the death of George Floyd and countless other Black people killed by police, several people—there is debate as to whether or not these people were involved in the protest or simply opportunists—vandalized and stole from many local businesses, causing significant damage to those already hurting from the COVID-19 pandemic lockdown.

Oblivion was one of those businesses.

Less than a week after SN&R interviewed Oblivion co-owner Laura Benson about the challenges of reopening a business with such a unique retail-plus-cafe model, the store closed again after the damage, which included a smashed window, destroyed coffee bar and theft of merchandise.

“I will admit that when our shop was looted, we were definitely very upset. It really hurt, just in general,” Benson said. “But what we understood was this was protest, and we understand what has to happen.

“We’re trying to see this from the perspective of the people who are experiencing racism, systemic racism,” Benson said. “Even though our business was hurt by it, we still want to see change and this is probably just a small sliver … of what Black and Brown people in general experience.”

Still, the next day, Oblivion announced its store was closed again. The city advised businesses to stay closed during the protests. Benson said damage to the store was too significant to immediately welcome customers back. Instead, Benson and her business partner Neil Estaris used the time to board up their windows and clean up the indoor damage.

“We did close for a few days, and we went ahead and opened and we’re currently doing business as we have been. We just have our side door open instead of our front door and people can order from that. And we are also doing delivery service and pickup [for food] and curbside [pickup for comics].”

At the urging of customers eager to help the business rebuild, the shop opened a GoFundMe that has already exceeded its $5,000 goal. Given the potential for damage as protests continue, Benson and Estaris are being cautious about repairs: “We’re being a little more wary on the window, but there are things inside we do need to replace, at least potentially, so we’re just kind of looking at what we can go ahead and do now and what we can hold off on,” Benson said.

“… With all these shutdowns across the world and the pandemic … it’s the perfect time to make all of these drastic, needed changes. Because it’s not going to go back to normal that quickly. So we need to use this opportunity to create a new normal.”

Benson and Estaris’s said their commitment to draw attention to the need to combat systemic racism is sincere.

“We have to make change, and we if we can use our own business as a platform for this as well to show support for this, we’re going to use it,” Benson said.