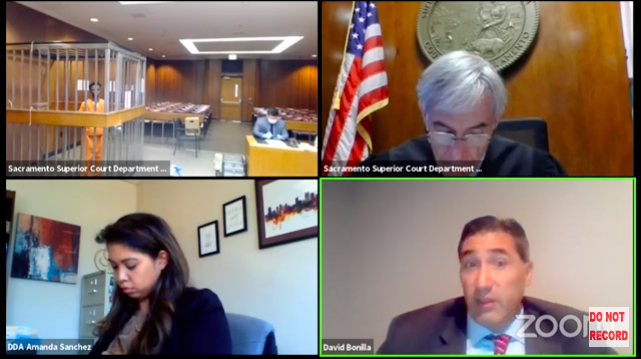 51 people were arrested for burglarizing Sacramento stores in aftermath of George Floyd’s death. Here’s how one judge is setting bail.

The judge and the prosecutors sat in their offices staring into their computer screens. The public defenders and bailiffs stood in their usual places, but with masks covering their faces and muffling their voices.

Mekhi C. Lewis, wearing jail orange, stood in a courtroom holding cell spritzed down with disinfectant, and said “yes” when the judge asked him if he consented to have his hearing conducted via Zoom’s video conferencing platform.

It was the June 4 docket call inside Sacramento County’s thinned-out jailhouse courtroom. Dozens of names and little time to spare.

Lewis, a 19-year-old Sacramento man, was one of dozens of people to be swept up during several days of protests against police brutality, which have grown larger and more peaceful since a Minneapolis police officer fatally asphyxiated George Floyd outside a deli on May 25.

An SN&R review of booking logs identified 75 arrests in Sacramento County between May 27 and June 8 related to the civil unrest that Floyd’s killing reawakened. Fourteen of the arrests were for failing to leave the scene of a riot and 51 were for committing a burglary during a national state of emergency, which President Trump declared in response to the global COVID-19 outbreak in March.

A separate yet familiar state of emergency has reemerged in a nation roiled by a public health crisis and skyrocketing unemployment. Since Floyd’s death, riot officers in numerous cities have confronted unruly protests with sometimes overwhelming force. Hundreds of videos of officers committing what appear to be unprovoked attacks on peaceful demonstrators have prompted firings and investigations, sympathy protests in other nations and new legislation seeking to disarm law enforcement agencies of their crowd-busting tactics and legal shields.

The Sacramento City Council cited an increase in criminal behavior in declaring a local state of emergency on June 1. The Sacramento County Board of Supervisors followed suit a day later and blamed the civil unrest—not law enforcement’s response to it—for forcing its hand.

Superior courts in California, meanwhile, remain impacted by a stalled effort to phase out cash bail. In Sacramento County, half of those arrested either had to buy their way out of jail or stay behind bars because they couldn’t. Of the 37 arrested individuals who had bail set, 12 had it set at $100,000 or more. Another two female protesters were jailed for a couple days before being released, while six people were denied bail altogether.

The local criminal justice system quietly churns thousands of feet below the national debate about police power. Lewis and his co-defendant are now churning with it.

Lewis and Jivian R. Saleem, 20, also of Sacramento, were both arrested June 2 in Folsom, where the two young men were accused of stealing items from a closed Nike outlet store. According to a summary of the probable cause declaration, police responded to the open-air Folsom Premium Outlets shopping center shortly after 1 a.m.

Security guards came upon the Nike store with its front windows smashed and merchandise stolen, and chased a group of individuals standing outside a nearby Zales store. Police responded and set up a perimeter. Officers eventually found four individuals hiding in a tree on the outlet mall’s premises and $800 worth of Nike apparel with the tags still on inside of a BMW.

Both Lewis and Saleem were booked into the downtown Sacramento jail on charges of committing burglary during a state of emergency and for prowling, and each was set a bail amount of $100,000. On June 4, they were arraigned on felony looting and second-degree burglary counts and a misdemeanor count of receiving stolen property.

Lewis’ appointed attorney wanted the judge to consider her client’s youth, otherwise spotless record and his community ties in her request to lower the 19-year-old’s bail amount. Judge Michael Savage instead hiked the defendant’s bail to $250,000. He later did the same for Saleem.

Referring to officers’ probable cause declaration, the judge said, “That is looting conduct during a state of emergency.” Turning to the defense attorney, Savage added, “I find that he is a particular risk to the community.”

Both men returned to court five days later hoping to have their bail amounts lowered.

Saleem’s attorney said his client couldn’t afford the bail and asked the judge to lower it to $50,000, adding that Saleem would stay with his mother if released. Savage rejected the request. Saleem exited through the holding cell and Lewis took his place.

Lewis’ attorney David Bonilla, who video conferenced in, emphasized his client’s clean record and the relatively low value of the stolen products in asking for bail to be lowered to $10,000.

“I understand the court’s thinking at the outset of setting the bail that it wouldn’t be prudent to have somebody bail out right away to be on the street, but the climate has changed significantly,” Bonilla contended.

Before the judge made his decision, Deputy District Attorney Amanda Sanchez noted that police found a ski mask in Lewis’ jacket pocket and keys to the suspect vehicle in his possession. Judge Savage told Bonilla he didn’t think the climate had changed.

“I do find that type of conduct—looting businesses during national emergency—does pose a high risk to the community,” Savage said. “I don’t know how much has changed in a week, but I’m not convinced the bail wasn’t appropriately set at the outset. So I’m going to leave bail set as remained for now.”

As of June 9, at least 20 of the 75 people arrested during the recent unrest remained inside the Sacramento County jail.

California had a rare opportunity to lead on police reform. Here’s what happened instead.

Be the first to comment on "First there was civil unrest. Now there are bail hearings."