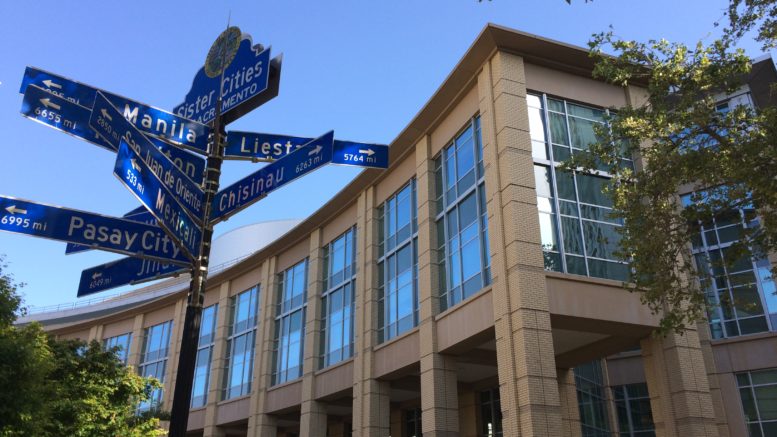 Sacramento officials are putting together the annual budget in the shadow of the coronavirus pandemic. (Photo by Foon Rhee)

It’s budget season at Sacramento City Hall, and in normal times the dark cloud would be the rising costs of pensions and retiree health care.

But the coronavirus pandemic has changed everything. With the economic shutdown and massive job losses, the recession that everyone expected eventually is happening now, and all at once.

The city projects a $33 million drop in revenue through June 30 in the general fund, which pays for public safety and other basic services, plus another $60 million decline in the fiscal year that starts July 1.

UPDATE: On April 30, City Manager Howard Chan released what he calls a “status quo” 2020-21 budget proposal, which does not include any cuts in public services, but no major additions, either. It does include three “mission critical” adds: an IT security analyst, the mental health team in the police department and a cold-storage unit for the city’s film archives.

The spending plan lets the city “cautiously and pragmatically move forward,” Chan wrote in his transmittal letter to the City Council. But he warns that more adjustments will be needed to account for COVID-19 because it “will be months before we know the full impacts to our City, our businesses and our residents.”

Because the city has been saving for a rainy day since the Great Recession in 2007-09, it’s in far better shape to weather the coming storm. As of Jan. 1, the city had a $33.5 million surplus in its operating budget, plus $55 million in its “economic uncertainty reserve.”

To balance the budget, the city would suspend putting $6.5 million more into that fund, among other steps. Before COVID-19, the city had projected a $2.7 million surplus in the 2020-21 budget, after accounting for the costs of new labor contracts.

But now, a major source of revenue—the sales tax—is plummeting under the stay-at-home order that took effect March 19. About half of city sales taxes come from general retail and food products, and many businesses in those sectors are closed.

Sales taxes make up about 30% of all revenue in the general fund, had been rising with a strong local economy and were projected to reach $194.5 million in 2019-20. That amount includes the Measure U sales tax, which voters agreed in November 2018 to increase from a half cent to a full cent.

But after surveying 17 other California cities and working with its sales tax consultant and the District of Columbia economist on the impact of the COVID-19 outbreak, the city is now expecting the $90 million in decline in general fund revenue over the next 15 months. That covers sales taxes, parking revenues, hotel room taxes and the business operations tax.

Another big revenue source—property taxes—was projected at about $168 million in 2019-20. Sacramento and other cities are still getting that money on schedule. Gov. Gavin Newsom rejected some calls to delay the April 10 deadline to pay without penalty after local governments warned that the semi-annual collections are essential when other revenue sources are drying up during the pandemic.

The City Council is scheduled to hold public hearings and debates in May and June—likely done remotely—and to pass the budget before July 1, when the next fiscal year starts.

Responding to the pandemic is the biggest challenge yet for Chan, who had the good fortune of starting as city manager in February 2017 during a robust local economy.

While the city hasn’t laid off or furloughed many employees during the coronavirus crisis, it has frozen hiring for non-essential jobs, suspended all travel and is looking at all non-essential construction projects that aren’t already under contract.

At the same time, the city is increasing some spending in response to the pandemic, including a $1 million economic relief fund for local businesses.

Officials are seeking savings and continue to review a new study that suggests 26 ways to cut costs or increase revenues—a total of $69 million to $79 million a year, plus $20 million to $23 million in one-time money. Many of the ideas, however, met immediate resistance from Chan and department heads and have been opposed previously by city employee unions.

Meanwhile, the work on neighborhood investment and economic justice projects funded by Measure U is on hold. The community advisory committee and the panel of investment experts are not meeting. And the city’s economic development staff is focused on the small business loan program and other pandemic-related efforts.

But the promises and goals of Measure U are still alive, the city says.

“The City recognizes when we move into the restoration period of this pandemic, inclusive and equitable economic development will be more important than ever,” spokesman Tim Swanson said in an email.

Mayor Darrell Steinberg championed Measure U, and his office says more money for neighborhood investments might come from the $89 million the city received on April 21 from the $2 trillion federal coronavirus relief bill. That money must be spent by Dec. 31 and can’t be used to fill a hole in the budget, but only to address damage from COVID-19. The city is hoping more federal aid to states and cities is on the way.

“We are looking ahead not only to how we can balance our budget, but also how we can invest in our city’s economic future in a way that both addresses the pain people are experiencing and builds on the momentum that we had prior to this pandemic,” Steinberg said in a statement. “This is a time where being creative and flexible is at a premium because you never know how you’re going to accomplish what you set out to do.”