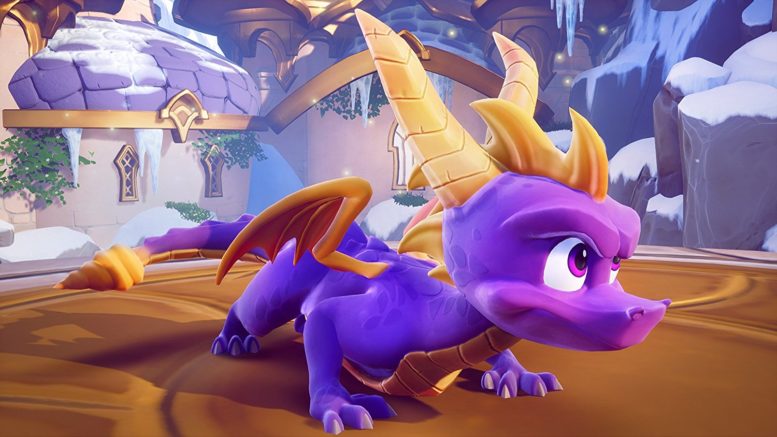 How is it that “Spyro the Dragon” is the best game to play during the stay-at-home order? I mean, just look at this guy.

As bars rang for last call, nightclubs shut their doors and restaurants flipped their chairs after Gov. Gavin Newsom’s stay-at-home order, gamers found themselves immersed in digitally rendered worlds, waiting out the coronavirus.

More than a month later, SN&R whisked some Sacramento gamers away from their digital worlds and brought them back to reality for a bit to ask the tough questions: What games have you been playing? What’s the best game to play during a global pandemic? And why is it Spyro the Dragon?

In it, you design artwork to sell to “persnickety” patrons while navigating the confusing art world. “The machine learns how and what you make, and you start to learn how and what people respond to in the game,” Burgoon said.

This can lead to some absurd situations.

“For a while, every single painting I did had to include a cartoony butt,” Burgoon said. “It got really ludicrous and silly, but by the end of it I had 30 of these drawings, that were all little butts.”

Burgoon prefers to play indie games, reveling in the work of small crews, limited only by their creativity.

“Indie games are just people in their garage, people starting their careers,” he said. “Go on Steam and [take] a chance on something that isn’t a triple A game … Just try something different.”

What about Spyro the Dragon?

“So Spyro is your favorite game I’m guessing?” Burgoon said.

How could the only purple dragon in all of the Dragon Realms not steal your heart?

Gilbert Galam created the Sacramento PC Gaming Group three years ago to organize LAN parties for his friends. The group has grown to more than 1,000 active participants.

As the stay-at-home order keeps getting extended, gamers have found ways to maintain friendships, even if they are unable to meet IRL.

“It sucks because the meetup culture was really core to our identity,” Galam said. “The trade-off is that we see more people playing games indoors, and we really want to support that.”

Galam’s go-to games during quarantine include first-person shooters including Valorant, the April release by Riot Games which pits squads of five against one another in a fast-paced kill-or-be-killed bloodsport.

“Valorant has become a big organizing tool; a lot of our members have been playing that together. The custom games feature and the matchmaking, it’s really easy to connect with,” Galam said.

According to Galam, gaming has helped the people in his group stay grounded and connected to the social world.

“For a lot of people in our group, gaming has become a gift right now,” he said. “For the more social people, it’s helping them keep their sanity, to be honest. It’s helping me keep my sanity.”

However, the burning question remains, what about Spyro the Dragon?

For some Sacramentans, the games they play actually serve their business interests.

STAB! Comedy Theater began streaming on Twitch in mid-March, and it’s in the middle of a seven-day fundraising marathon stream dubbed, “STAB!athon.”

“We thought a way to build our Twitch presence was to add a little bit of gaming,” said Jesse Jones, co-founder of STAB! Comedy Theater. “I thought the Jackbox games would work well to bridge the gap between comedy and gaming communities.”

The Jackbox Party Packs are collections of games with absurd titles such as Drawful, Fibbage and Tee K.O., made for people to try and out-funny one another.

While the theater is closed to the public, viewers can hop into a Jackbox game with STAB! on Twitch.

“I can be doing this in the theater by myself and connecting to up to seven more players around the country, and even more people joining in the audience,” Jones said. “It’s really ideal for this situation.”

Jones admits that if he had access to a Nintendo Switch console he wouldn’t be streaming nearly as much. “I just would have been home, playing Animal Crossing all day,” he said.

Also available on the Switch? Spyro: Reignited Trilogy, the high definition update to the trilogy which launched the Spyro phenomenon.

Dan Herrera has been streaming his gameplay on Twitch under the moniker, Danotage, for five years, and since the stay-at-home order took effect, he says his life has been pretty much the same.

“What’s special with this line of work, we do everything from home anyway,” Herrera said. “It hasn’t really changed much, other than going out to get food.”

Still, Herrera says that he’s noticed he has returned to the kinds of games that he first played on Twitch, ones that built his following.

“We’ve gone back to my roots of what we used to play with my community, which is a lot of simulation games,” he said.

One such simulation game is the recently released SnowRunner by Saber Interactive, which puts you behind the wheel of a big rig plowing through extreme environments.

“While that doesn’t sound like a bunch of fun, it kind of makes you forget that you can’t go outside much,” Herrera said.

One of his favorite games to play on stream is Enter the Gungeon, a pixel art-laden, isometric, procedurally-generated dungeon crawler where the goal is simple: Keep moving forward, and fight using anything you can pick up.

“Every time you play it, you get a different experience,” Herrera said. “Especially in a crisis, in times like this, it’s easy to go back and say, ‘Oh, this is a game I remember, and it doesn’t feel repetitive to me.’ It’s like I can see the magic behind it all again.”

A great game with magic that doesn’t feel repetitive? You mean like Spyro the Dragon?

“Spyro the Dragon is a fun game, and that brings up a great point: Try not to play anything too serious,” Herrera said. “The biggest thing is going to be having fun, and the moment you start to get frustrated, that’s when you want to stand up and leave, and that’s obviously not the goal right now.”

So, as you glide through the Dragon Realms, freeing your crystallized comrades, beating down gnorcs with a satisfying ram and burning helpless sheep alive (Spyro’s credits assure you that no real sheep were harmed), be sure to have fun.