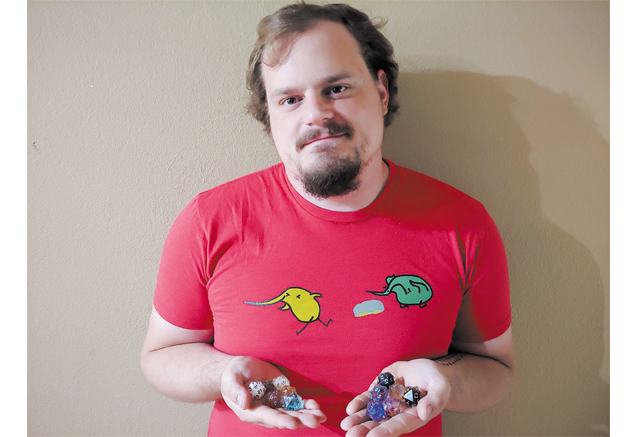 For those who dream of becoming their own boss, sometimes it’s necessity that turns the dream into reality. For Christopher Smith, creator of Kuroheim Item Shop, impending layoffs motivated him to start his own business, and quickly. Though a lapsed gamer—he’s since rejoined the fold as a 5th Edition Dungeons & Dragons player—his work became creating resin dice that are works of art on their own.

Why did you begin making dice if you weren’t gaming?

That’s right, I wasn’t playing a game…when I started. But I [found I was about to be laid off] and I was like, “Okay, well why don’t I do something that makes me my own boss where I don’t have to deal with other people and threats of being laid off or anything like that…

I have a bunch of [friends] who are really big into tabletop gaming. And I thought, hey, this might actually be a good idea. And I went online and looked at other people’s prices and I thought “Wow, those are really, really overpriced.” I knew I could do it at least just as good, but for a lot cheaper.

What kind of materials do you use?

To make the dice themselves—because there’s a lot of other steps, because I do my own molds, make my own masters, there’s a lot of other stuff, too—but the dice themselves, mostly just a two-part epoxy resin…To get the colors you need, I use alcohol ink, which is a water and resin soluble ink that doesn’t mess with the ratios, and mica powders like you’d find in makeup and stuff like that…

You want it to be hard as rock when you’re done with it, and if you put too much into it, it’ll get all gummy or it won’t cure, and it’ll just—it won’t be something you can use at all.

So it’s a little bit like making a cake?

It’s very much like making a cake. There are less ingredients involved, three, maybe four things if you’re getting complicated. But it’s pretty much like that. If you mess up with the ratios, then you get something completely different, a lot of times unusable.

Do you mostly sell through Etsy?

That’s correct. I probably do about 90% of my sales through my Etsy shop. I originally didn’t think that Etsy would be my main seller, because I’d go to these Con[vention]s, and people would buy my stuff. And I thought that was pretty neat until the pandemic hit, and I had to figure out what the heck to do before rent’s due the next month.

So it has helped you make it through?

Yes, this whole process of starting my own business….finally getting it up and running and having actual sales happen is very promising and definitely really helping me staying me afloat so I don’t have to call someone else boss.

Do you take custom orders?

A good amount of people [ask] if they’re looking for something very specific that I just don’t have on my shop…I’m very happy that I do those commissions because they test my creative bounds more than anything else, because they’re asking for something that either I didn’t think of, or something I’ve never really experimented with before. And that makes me feel really good when I can send one of those guys out.

Be the first to comment on "Fifteen Minutes: Christopher Smith, resin die maker"