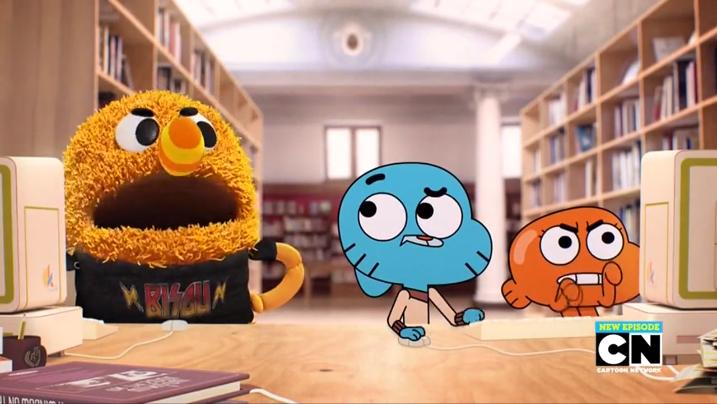 "This isn't the way to Sesame Street!"

Watch: The Amazing World of Gumball
What: A hybrid animation show on Cartoon Network
Who: Creator Benjamin Bocquelet
How: Hulu, YouTube

I was going to recommend Hunters, an Amazon Prime series about a secret society of mostly Jewish Nazi hunters set in the 1960s. But then my 5-year-old’s raucous laughter turned me onto a kid’s show about animated characters navigating the real world. Hear me out:

The Amazing World of Gumball is about a blue 12-year-old named Gumball with a cat for a mom, a dad and meddling kid sister who are pink bunnies and an adopted brother who’s a goldfish named Darwin. Still with me? Anyway, the show does a great job presenting kids with real-life issues such as puberty, school crushes and getting into mischief, but with such wonderful sarcasm and pre-teen humor that it all goes down brilliantly. Check out some of Gumball’s sick burns:

“Hey, you were the one who said he’s about as cool as world music.”

“The only thing your mom is good at being is super average.”

“Did you bring your door? ‘Cause you’re gonna get slammed.”

Take note, parents. Our kids have better shows than we did and they come with even better disses. —Steph Rodriguez

Read: The Feral Detective
What: A bizarre, bravura detective novel for those of us still bewildered by the 2016 election
Who: Pop culture-steeped smartypants author Jonathan Lethem
How: Try buying it from an indie bookstore through indiebound.org.

The author of sad-clever concoctions like Motherless Brooklyn and The Fortress of Solitude works to subvert genre expectations like an ocean subverts a cork, walking a troubled woman into a grizzled detective’s office before eschewing what typically follows. While the title character is a fascinating figure whose laconic chivalry begins to rattle the closer he gets to a murky destiny, this is Phoebe’s mystery to unravel. Our seething, wiseacre narrator has fled one civilization she no longer understands (“I blamed my city for producing and being unable to defeat the monster in the tower”) only to careen into a more brazenly uncivilized civilization, where sunfried tribes get their apocalyptic news from jet contrails and hallucinogenic desert spores. After a grisly discovery that would’ve felt at home on True Detective, Phoebe thinks, “We were out here alone, reinventing the universe.”

Lethem doesn’t reinvent detective fiction here, but he does seem restless to barrel past its conventions while also working out his post-election PTSD. The result is a strange, timely brew from an author whose past influences and present grievances practically barf onto the page. That sometimes makes The Feral Detective feel like an Ayahuasca trip into neo-noir country. The experience is a little rocky, but Lethem is one hell of a guide into the parts of ourselves that we no longer understand. —Raheem Hosseini

Play: Lovers in a Dangerous Spacetime
What: A cooperative space adventure pushing you to love hard in a wild universe
Who: Developed by Asteroid Base
How: Nintendo Switch, Steam, Xbox One and Playstation 4

Spending all day every day living in a cramped room with your partner can be stressful. Luckily, there’s a video game that can help your relationship grow stronger. In Lovers in a Dangerous Spacetime, you pilot a spaceship through the vast universe while fighting off fearsome creatures and rescuing bunny scientists. But you’re not going to make it very far if you and your partner don’t work together. The gameplay can be challenging; control the engine while your partner blocks incoming attacks with the shield or blasts trilobites with the Yamato Cannon.

Dishes pile up in the sink, laundry goes undone, but does that cause a fight? Maybe it would have before you discovered the power of love.

Save the bunnies. Save the universe. Save your relationship. And eventually get to those dishes. —Patrick Hyun Wilson

Watch: The Wire
What: A documentary about pagers
Who: Creator David Simon
How: Any streaming platform with HBO

There’s this little show called The Wire, ever heard of it? HBO has made a lot of their content available to stream for free during the coronavirus crisis, including this obscure crime drama set in Baltimore. (I mean, sure, numerous critics have called it the greatest television show of all time, and it’s former President Barack Obama’s favorite, but The Wire never scored the Emmy bling of The Sopranos or the blistering ratings success of Game of Thrones.) I’ve only just finished season two, but so far, there are a lot of things that make this highly underrated show worth watching: In-depth character arcs, a nice opening theme song, plus the recurring appearance of pagers, which were small devices used for instant communication back before cellphones became a thing. It’s delightful watching them work on screen, beeping in pants pockets, sending coded messages and directing people to nearby payphones to chat. Technology is amazing! —Rachel Mayfield

Read: The Show That Never Ends: The Rise and Fall of Prog Rock
What: A book that makes you realize you like prog more than you think you do
Who: Author David Weigel
How: Support your favorite local bookstore, order from Bookshop.org or borrow it digitally from Sacramento Public Library

If you’re a news junkie, you likely know The Show That Never Ends author Dave Weigel from his excellent political reporting for the Washington Post. You were likely not aware that he’s also an expert on prog rock, the genre that produced bands like Yes, King Crimson, and Emerson Lake and Palmer.

I hate prog (short for progressive)…or I say that I hate prog. It’s a more expansive genre than I give it credit for, but as far as the self-indulgent, often outright boring bands that make up its core, I’m not a fan.

The Show that Never Ends didn’t turn me into a full-on prog fan. It is, however, a highly entertaining history of the subgenre. A highlight: the bizarre but true story of the Yes recording of Tales From Topographic Oceans, in which indecision about where to record led to a farm-themed studio, complete with hay bales and a cardboard cow. Weigel’s book works its way from origins to present day, and whether you’re a fan or a rubbernecker, it’s worth a read. —Lindsay Oxford

Listen: Floodlines
What: An eight-part podcast on New Orleans during Hurricane Katrina
Who: Produced by The Atlantic
How: Free on iTunes, Stitcher and other pod-catchers

In the last few months, a media project seeking to learn from the past became almost shockingly relevant faster than anyone involved with its production likely could have imagined.

Floodlines is a podcast miniseries that revisits Hurricane Katrina on the 15-year anniversary of the disaster. Created by reporters and producers at The Atlantic, the series covers much of the same storm-beaten ground as Spike Lee’s masterful HBO film, When the Levees Broke, but does it with different survivors, a new medium and the invaluable advantage of the passage of time. The sum is a gripping, wide-ranging examination about government incompetence and a force of nature that brings the Big Easy to its knees—one that offers a fascinating lens through which to view our current pandemic.

This series was released in early March, just as COVID-19 became the city’s worst catastrophe since Katrina. At least 1,800 people have died in Louisiana, including New Orleans’ elder statesman of jazz, Ellis Marsalis Jr., as well as its indomitable culture-bearer, Ronald Lewis, who built The House of Dance and Feathers Museum in the Lower Ninth Ward.

The Atlantic had been working on Floodlines for roughly a year and, like the rest of us, could only begin to see the scope of what was happening in New Orleans, New York, Detroit and elsewhere in the final phase of production. Fortunately, Floodlines is also interested in stories of personal growth, healing and perseverance, which make this series not only vital—but bearable even on bad days. —Scott Thomas Anderson