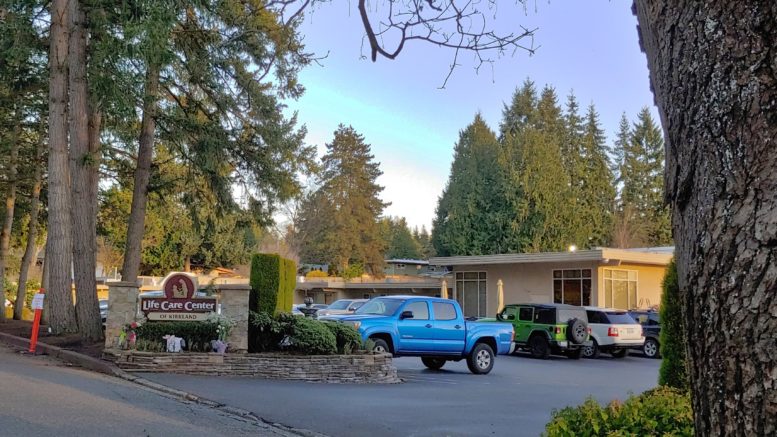 The Life Care Center in Kirkland, Wash., was the nation’s first hot spot for COVID-19 infections. (Photo from Wiki Commons)

Nursing homes are hot spots for COVID-19, but until now, good luck trying to find out how many cases there are in Sacramento County’s facilities.

The county’s Department of Public Health has been updating numbers regularly by age group, gender, city, zip code and race, but until April 20 was not disclosing numbers on nursing homes.

Three days after the state began releasing information on nursing homes, Sacramento County’s department said it will release weekly updates on Fridays. According to the first numbers, there are 113 cases and 9 deaths at 15 “congregate facilities,” which include skilled nursing homes, assisted/senior living facilities, memory care facilities, group homes and mental health, alcohol or drug treatment facilities.

When there is a COVID-19 case at a nursing home, it is responsible for notifying staff, residents and relatives. “Our public health nurses are working closely with the individual nursing homes to ensure proper infection control and contact tracing,” the department spokeswoman said in an email.

Under the department’s old policy, it had said it may make the data on nursing homes public—but only when there are enough cases to protect privacy. So in other words, the public won’t know how dangerous the situation is at the county’s 250-plus assisted living facilities until it gets worse?

What is known about nursing homes is scary enough.

The first coronavirus-related death in Sacramento County occurred last month at Carlton Plaza, a home for the elderly in Elk Grove. On April 21, Yolo County public health reported 64 confirmed cases (31 residents and 33 staff) and six deaths of residents at a nursing home in Woodland that the state later identified as Stollwood Convalescent Hospital, part of St. John’s Retirement Village.

Later on April 17, the California Department of Public Health started posting specific information on nursing homes, and said a snapshot with 86% of homes reporting found 1,290 cases among staff and 1,740 among residents in 258 skilled nursing facilities, including six in Sacramento County.

Nevada beat California on public disclosure by putting out an online tool to track cases at individual facilities. As of April 21, it reported 430 cases and 27 deaths.

New York, the state with the most cases by far, also started on April 17 providing information on specific outbreaks at nursing homes, with more than 40 recording at least 10 deaths.

The nation’s first COVID-19 epicenter was a nursing home in Washington state, where 43 residents eventually died. Since, there have been other hot spots at nursing homes, including one in suburban Richmond, Va., where 42 died and one in New Jersey, where 17 bodies were discovered this week.

As a result, federal officials were also under increasing pressure to collect and release data from the nation’s 15,000 nursing homes. On April 20, officials said they plan to start tracking and releasing the information on COVID-19 cases.

The Associated Press has been doing its own count, based on news reports and state public health agencies, and says deaths at nursing homes and long-term care facilities have reached at least 8,500 nationwide.

At the same time, Deborah Birx, the White House coronavirus response coordinator, said Thursday that consistent testing at nursing homes is crucial for the phased reopening of states.

Older people and those with preexisting medical conditions—including many residents of nursing homes—are at higher risk of death or severe complications from COVID-19. In response, federal and state public health officials have issued specific guidelines to prevent spread in nursing homes for residents, staff and visitors. The federal agency that oversees nursing homes recommends they have separate areas for residents who test positive and separate staffing teams. Some facilities have imposed stricter rules, such as banning outside visitors and closing communal dining areas.

With better tracking of cases in Sacramento, California and across America, we may find out how well all those steps are working.