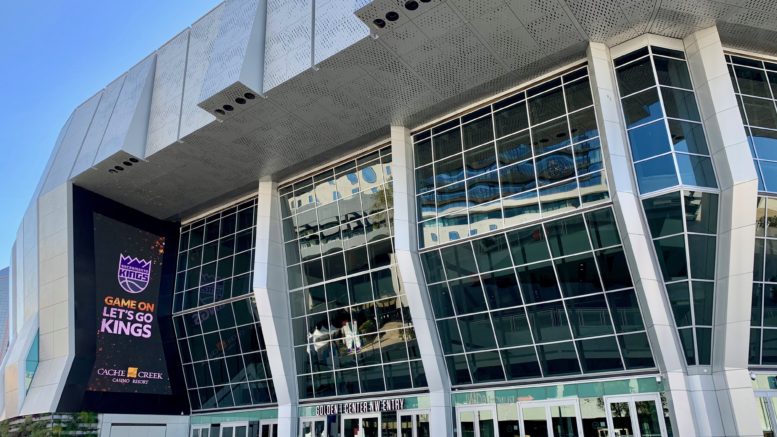 In 2014, a prolonged legal battle over Sacramento’s future ended with the first shovel hitting dirt at what would become Golden 1 Center and Downtown Commons.

The watchdog groups who tried to stop $223 million of public money going into the project felt bowled over by the political muscle flexed by developers and their outsized influence on the city’s levers of power. They also worried about what might come next from a mayor and City Council so closely aligned with the real estate lobby, even as an affordable housing crisis loomed on the horizon and homelessness worsened into epic proportions.

Local author June Gillam returns to that social battlefield in her new novel “House of Hoops,” a thriller set in the first days the Sacramento Kings were playing in the new arena as preservationists and community organizers licked their wounds and braced for the next neighborhood to be “revitalized” in a way that would make it unrecognizable and unaffordable.

A Land Park native, veteran writer and local news junkie, Gillam has produced a vivid, Sacramento-centric yarn that will leave readers with a deep sense of déjà vu.

Gillam, a graduate of McClatchy High School and Sacramento State University, has spent the last 30 years teaching English at San Joaquin Delta College. For more than a decade, she has also been writing a series of California thrillers for the indie publisher Gorilla Girl Ink. These stories center on Hillary Broome, a journalist whose career has gone somewhat awry.

“House of Hoops” is Gillam’s fourth book with Broome as its protagonist. It finds her working as a public relations specialist in 2018, tasked with selling the idea of a proposed community center in downtown Sacramento. Broome and her 12-year-old daughter, a local basketball phenom, share an obsession with all things Kings, as well as an admiration for what builders have just pulled off with the Golden 1 Center and Downtown Commons.

But Broome starts to reconsider her assumptions when she finds herself under constant attack by Charles Bierce, an embittered English professor from Alkali Flat who is fed up with the City Council’s cozy relationship with developers—and endless cash going into their campaign coffers. Bierce and his allies view the community center that Broome is promoting as another Trojan horse for the forces of gentrification.

“The book really comes from my strangely divided self,” Gillam said. “I had a lot of friends who were totally against the new arena, and lot of friends who were really for it, including my husband. I am a rabid Kings fan, but I’m also a native daughter who doesn’t like to see the way developers have run roughshod over the little guy.”

“House of Hoops” is set in a time of political turmoil, developer power plays and headline-grabbing scandals. As the Golden 1 Center was beginning to rise, developers successfully lobbied the City Council to ditch their obligation to build a percentage of affordable units in all their housing projects. Then, the same special interest groups convinced the council to allow Sacramento’s railyards project, which will be the largest urban infill development west of the Mississippi, to be built with only 6% for affordable homes.

Author Michele Drier—who advised Gillam on “House of Hoops” as they collaborated in the Sacramento Sisters of Crime group—says she thought her friend had struck upon a rich moment in recent local history, particularly the aftermath of the Golden 1 Center struggle.

“That was one of the most visible battles in Sacramento in the last 20 years,” Drier told SN&R. “This was something that changed the whole shape of the downtown area. Her book really looks at what happens when a city or town makes a seismic shift like that.”

What happens in the fictional narrative of “House of Hoops” is a path that leads to violence.

But beyond its drama, the novel is stitched with Sacramento events and eccentricities that are all too genuine. The story references the shock that many in the city felt after the bloody riots on the state Capitol lawn in the summer of 2016, not to mention the fear parents had in the wake of a deadly mass shooting in Southern California a year-and-a-half later. The names of real Sacramento restaurants where the characters eat at also give the book a patina of authenticity, as does Gillam’s allusions to the widespread anger at Sacramento’s expensive, dysfunctional parking meters.

Gillam says that particular anecdote didn’t just come from her neighbors’ complaining: One afternoon she went to visit a friend who was sick with cancer in the hospital. The meter Gillam parked at wouldn’t accept payment, no matter what she tried. Anxious to see her friend, Gillam left a note for city parking enforcement explaining the broken meter. But when she got back to her car, there was a ticket. Gillam tried fighting it, lost and joined the ranks of residents convinced the meters were bilking the public—a finding eventually confirmed by an internal city audit.

But it was a different real-life experience that gives the questions in “House of Hoops” their weight. After leaving a Kings game one night, Gillam talked to a mother of four who had just been evicted from her home in Alkali Flat and had been separated from her children due to the rules at the shelter where she was staying. The encounter caused Gillam to measure all the shiny new construction across downtown against the reality of a mother’s anxiety and sense of foreboding.

“Her story was really heartbreaking,” Gillam recalled. “It’s an example of the problem.”

“House of Hoops” was released several months ago and is available at most online retailers. Gillam has turned her attention to researching and writing about white power gangs in the region for her next Hillary Broome thriller, though reader reaction to “House of Hoops” is still filtering back to her.

“My Sacramento people seem to like it a lot,” she said. “But for the ones who are really in favor of development, they kind of give me an arched eyebrow.”